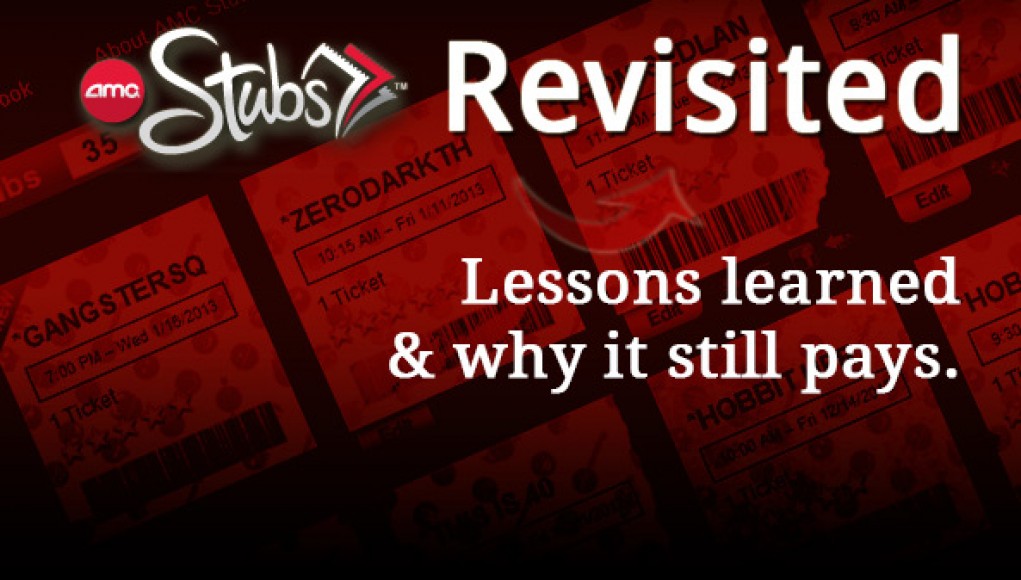 I have chosen to revisit my previous post on the AMC Stubs card, reflect on my own experiences, and offer some solutions and explanations to changes in the program in recent months. It has been about seven months since I wrote that post and have received both praise and outrage towards the program and my post.

I have also seen a lot of outrage towards the program for certain changes in the past months, and most of this outrage is from members or former-members who did not take the time to educate themselves about the program and its limitations. Then again, some recent changes in the Stubs program has rendered certain discounts obsolete and is unfortunate for those who once found a clever loophole.

Regardless, I stand by original thesis, that the AMC Stubs card program is beneficial if you can determine your spending habits and learn about the benefits of the program.

Be an informed consumer. Those who just shell out money without knowing what their product does tend have more aggravation regarding their purchases. As a former retail associate I’ve noticed that consumers will also hear and understand things differently that what is told to them. AMC Stubs’ terms and conditions clearly outline the program’s limitations and it much easier to read than other terms and condition pages and end-user licenses that I have come across.

Know your spending habits. It is important to know how you spend your money, this way you can make an informed decision on whether or not the AMC Stubs card is worth the investment. I spent nearly a month on tickets to AMC theaters contemplating whether it was worth it for me to purchase the card. Retrospectively, I saw that I would have been well on my way to a $10 reward and purchased the card.

Make reminders. With cloud-based calendars and smartphones (even non-smartphones) there is no reason to miss out on dates. I even make reminders to change my contacts, maintain and clean my car, backup my computer, birthdays, and I even make reminders about which movie reviews I have publishing on which dates. There is no excuse to not know when something is going to expire, except for the milk in your fridge, which always seems to creep up on you faster than you expect.

The idea of the rewards card is to get you to remain loyal to AMC and keep coming back, and the $10 reward is designed to increase the urgency to comeback sooner. Furthermore, they track your spending and exhibition habits in order to configure their marketing campaigns towards target demographics. Some comments have pointed out that within a month of a card’s expiration, a box office attendant will notify the card holder that their card is going to expire soon, but cannot provide what date.

Many have also expressed that rewards expire after 90 days. If you’re not using the rewards within 90 days, then that is your fault. Furthermore, if your card expires, so do your rewards. If you do not use your $10 within 90 days, why have the card in the first place? The box office attendants do not divulge in this information, but I’m sure if you ask they will let you know. Of course, it is listed in AMC’s terms and conditions. You don’t read the terms and conditions? Most people don’t, but an informed consumer does. 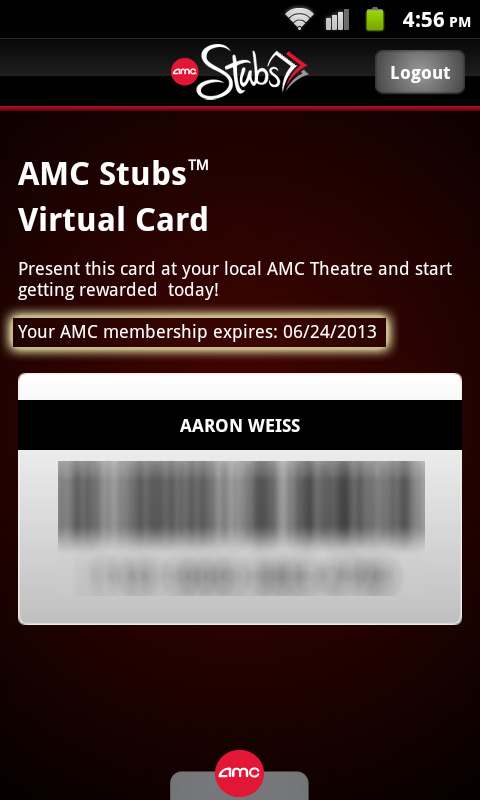 I have also been pointed told that you used to be able to apply your rewards points towards a gift card, which would negate points expiration because gift cards do not expire. This change has been reflected in the membership’s terms and conditions.

AMC has recently undergone many changes, primarily because the large theater chain was acquired by Dalian Wanda Group, a large Chinese conglomerate in May 2012. The group has placed new restrictions on “run away” free rewards, especially these Gold Experience passes. In the previous posts’ comments section, many consumers expressed outrage at this.

Essentially, one could purchase a Gold Experience package at $84.99 (was $82.99) and apply the face value of those tickets towards points on the card. This would allow the Stubs member to hit the $100 after using the tenth ticket, and get the $10 rewards. In other words, $85 would let someone see 10 movies at any time (a possible $120 value) and then get a $10 in rewards. This change has been reflected in AMC Stubs’ terms and conditions.

As you can see, AMC theaters may be losing up to $55 per AMC Gold Experience package. Movie theaters typically make their money on concessions. Box office gross from films during first and second weeks are usually given directly to the distributor and studios, making concession income imperative for theaters.  If they are giving up between $20 and $45 on ticket sales, these Gold Experience packages can drastically cut into a theater’s bottom line. So then, it is understandable why the chain would halt such benefits, although unfortunate indeed.

Gold passes are still a great deal. They go for $84.99 for 10 passes, which in some situations could save almost $25 on tickets evening tickets depending on region. Essentially an $85 package makes each ticket worth $8.50. So you have to decide which is better, saving $25 over the course of 10 film admissions, or getting $10 rewards for $100 spent. It depends on your region, and what times you are seeing movies in theaters. Then again, you must already have a Costco membership, and the answer still depends on the individual’s spending habits and theatrical exhibition behavior.

AMC offers discount codes for new members. You have to be diligent about looking for these codes, and they tend to expire quickly and can only be used so many times.

Be wary about some people offering their card number to you for online fees waved. It might save you a dollar per ticket and time in line, but someone else is earning all the rewards. Why not just grab an AMC Stubs discount code online, save the online fee, and then earn the rewards?

Currently, you can try HOLSTUBS6 as a coupon when you purchase the card online for the first time. I am not responsible for this coupon, I simply found it online.

I was unable to find renewal codes, as many have greedily stated that they would only renew if they received a discount.

“I shouldn’t have to pay to be rewarded for loyalty”

Before my parents subscribed to the Sunday newspaper, my mother had me go out and get the Sunday paper so she could spend the afternoon searching and clipping coupons. One or two coupons could pay for the cost of the newspaper, and I got to read the comics section.

To a certain extent, I do agree that paying to receive discounts at certain times is unfair, especially if you are loyal. It would also be nice to walk into your favorite store or theater and see familiar, smiling faces and be greeted with presents, gifts, and applause simply for coming back. The same is so for a bartender to work on your usual drink as soon as they see you walk in the door, but you still have to tip that bartender well enough to make yourself memorable. Since you have chosen to frequent major conglomerate-owned theater chained, you are an anonymous person, and thus will be as treated such.

By signing up for a card, paid for or not, you are no longer anonymous, you become a number, and that number is attached to your zip code, name, birthday. The AMC Stubs program even offers you a free Coke product on your birthday. So, they know where you live and your birthday [Could be the plot of a horror film].  That is all they need to monitor your spectatorship and spending habits. I know, I know, you are not a number, you are a free man. At least we all wish to think so.

After looking at some of the other loyalty programs, such as Regal, the AMC Stubs card program is best for those who purchase more than just a ticket. Even the old MovieWatcher program had a cap of 4 points per visit, and points could only be awarded on ticket purchases. Regal’s program is capped at $20 spent per day. AMC Stubs’s maximum purchase amount that can be earned in any day is $500. AMC Stubs can be incredibly fruitful if you purchase tickets and concessions for large family. Essentially, paying for loyalty is worth it if you are incredibly loyal.

We invest money wisely in order to see a monetary return at a later date, but wise investing requires some calculations, reading, and smart choices. Thus, if you do not do your homework, then you do not get the grade. Once you determine how much you plan on visiting AMC theaters and how much you intend to spend in a year, $12 can pay off.

I would also like to mention that many independent theaters and revival theaters that rely on donations have memberships to their theaters. Sometimes this includes free food, the ability to reserve seats, reduced ticket prices, or free tickets. Sound familiar? Then again, we are talking about the difference between a large, foreign-owned conglomerate and local, independently owned theaters managed by passionate cineastes.

It has now been seven months since I purchased my AMC stubs card, and have received over $35 in rewards points. Most of these rewards have been obtained through buying pre-Noon tickets at $6 each, which really means it takes me much longer to accumulate the points to reach rewards thresholds that those who visit AMC at non-matinee times.

I have also found that AMC stubs rewards additional points towards special occasions. For example, I had originally purchased tickets ahead of time on Fandango to see The Hobbit: An Unexpected Journey in 3D HDR. After thinking twice, especially since I have been apprehensive about 3D, I chose to cancel my ticket and instead get the typical 2D ticket. Despite my cancellation, I was still rewarded with an additional $5 in rewards points. I have also discovered that you can use $45 of your Discover rewards points to purchase a $50 AMC gift card. Furthermore, gift card purchases can be applied to your AMC Stubs card.

I would like to conclude by again disclosing that I am in no way affiliated with AMC Theaters, AMC Stubs, or other theater chains. I receive no financial or other forms of compensation from AMC and there are no affiliate links in this post. I cannot help you with lost or misplaced cards, or even help you get your rewards back. This post, as well as my previous piece about the AMC stubs card, is simply a review as a service to the community. I remain as an objective observer of the events that I see, and offer an informed opinion based on the information I have gathered.