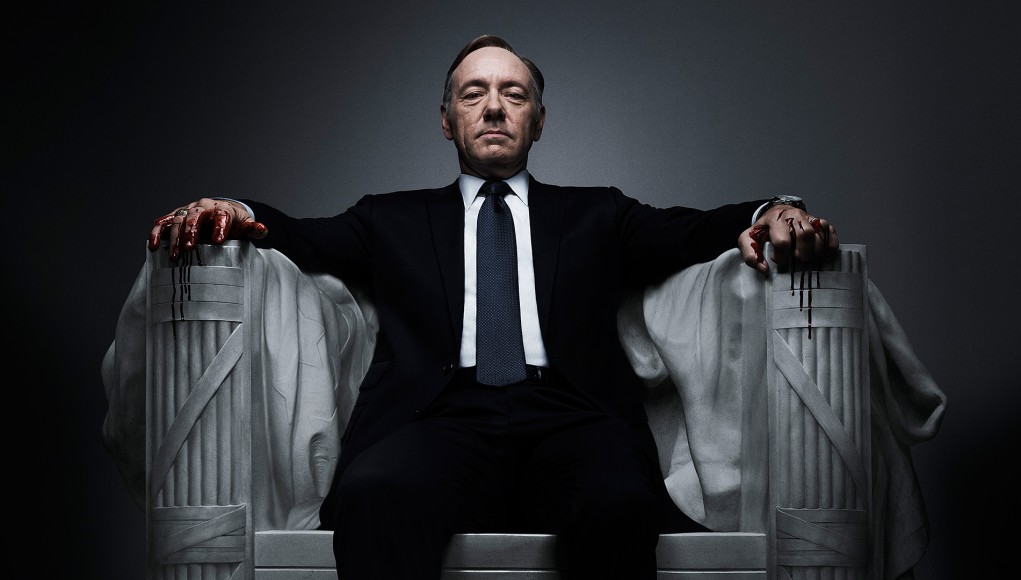 One of the best new shows of the year never made it to air, and it never even attempted to do so. Furthermore, the entire thirteen episode season of House of Cards has been released at the same time. While not a first, it is an impressive feat as it stars Kevin Spacey with a southern drawl, and is produced by the cynical auteur David Fincher. The series has shown itself to be an effective political thriller that never seems to run out of steam, even if you chose to watch the show back to back.

House Majority Whip, Francis Underwood (Kevin Spacey), is passed over for Secretary of State after supporting the successful election of the President Elect. Along with his wife Claire (Robin Wright), the two have begun to rearrange their focus in their respective careers to deter from the common Democrat political narrative. Frank has also taken fellow Representative Peter Russo (Corey Stoll) under his wing, and has formed a scandalous professional and personal relationship with Zoe Barnes (Kate Mara), a political journalist firebrand.

House of Cards is a Shakespearean political thriller that takes cues from politically conscious investigative journalism (e.g., All the President’s Men) that tends to bring political dynasties down from the inside. Frank’s asides break the fourth wall, not in the cute, playful Ferris Bueller fashion, but in a way that underlines Frank’s sinister intentions. Sometimes he does it merely by looking at the camera in an “I told you so” or “See?” eye-roll, reminding you that Frank is playing a complicated game of chess where he is several moves ahead, and has been wearing a poker face throughout.

Since the series begins after a Presidential election and debuts after President Obama’s second inauguration, it thankfully maneuvers around the tired election narratives. Instead, the series focuses on the politics of securing votes for bills: strong-arming, promises, concessions, disappointment. We saw much of this in this past year’s Lincoln, where political parties were the inverse of their current objectives, and procuring votes was dirty, no matter the intrinsic value of a human’s life.

This sinister plot of dirty politics mirrors much of David Fincher’s past works, except here the critically acclaimed auteur only serves as director of two episodes, but also serves as executive producer. His mark and sensibilities are very apparent in this series. The real dark political thriller aspect comes from The Ides of March scribe and House of Cards developer Beau Willimon, who has also begun his career with an Off Broadway political satire.

The House Majority Whip helps manage his or her party’s legislative programs and objectives, or as a plumber as Francis likes to put it. With Francis being passed over as Secretary of State, the whip has now wrapped itself around its own hand, thwarting any notions of real progress. Francis is told that he is the most useful elsewhere in the party, but Francis admits does not like to be managed, and he also does not like to owe favors, two important factors that determine his motives throughout the season. Yes, these political conspiracies can be seen as a house of cards, but Francis must also don a poker face. Chess is a much better analogy, as moves must be thought through several turns a head, and reactionary moves are always blunders.

Technology in the Role of Politics

The Washington Herald, where Zoe begins her career – and her antics – as a journalist, she is well aware of how blogs and social media has sped up their industry, but sees that her paper’s management have collectively chosen to remain diligently attached to providing concrete journalism. Zoe knows this, but is assiduous to keeping up with the pace of a hyper-modern publication world. She tends to have much of the same characteristics as Zuckerberg in The Social Network, Lisbeth Salander in The Girl with the Dragon Tattoo (2011); might as well throw Jake Gyllenhal’s character from Zodiac in there. 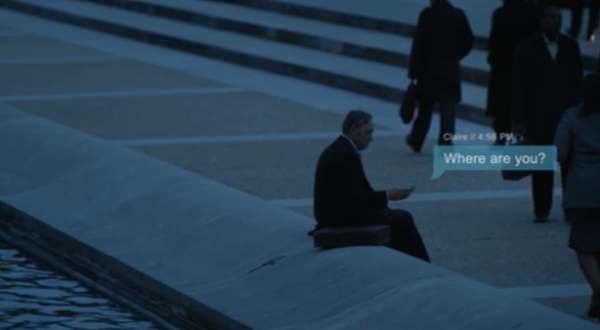 House of Cards also builds upon the technological visual and psychological themes from The Social Network, particularly how Washington’s daily political sphere is uprooted constantly by media and social media attention. The show even displays text message conversations in a very rapid, aesthetically pleasing, and realistic fashion. At certain times, messages appear on screen in a three-dimensional speech balloon graphic, akin to modern smartphone design. Furthermore, some of these scenes are shown in longer takes, allowing a more realistic portrayal of text messaging conversations from the human perspective. Characters fastidiously thumb their message, wait patiently for a reply, then respond as if it has become an inherent human characteristic. It may not be revolutionary, but it is effective and appropriate for a series that lays its foundations on the exponentially increasing speed of information.

Zoe is ambitious and tech savvy, but unlike the other characters she is aware of how she can socially move up the political journalist ladder. Although she is very aware of her youth, she is often treated like a child. In a fiery argument between her and her editor after a scandalous TV satellite interview, she is restricted from TV interviews in the same fashion a daughter would be grounded: “No TV for 2 weeks?” “Wanna make it a month?”

The Art of the Stroke

Rowing, crew, and boats tend to be an important metaphor throughout the season. We are first made aware rather obviously of this in the first episode during the time Francis transmits sensitive information Zoe. They are seated at a museum where there is an impressionist painting of two men rowing crew. Francis makes a comment that this passing of information places them in the same boat where they must row together to remain afloat. 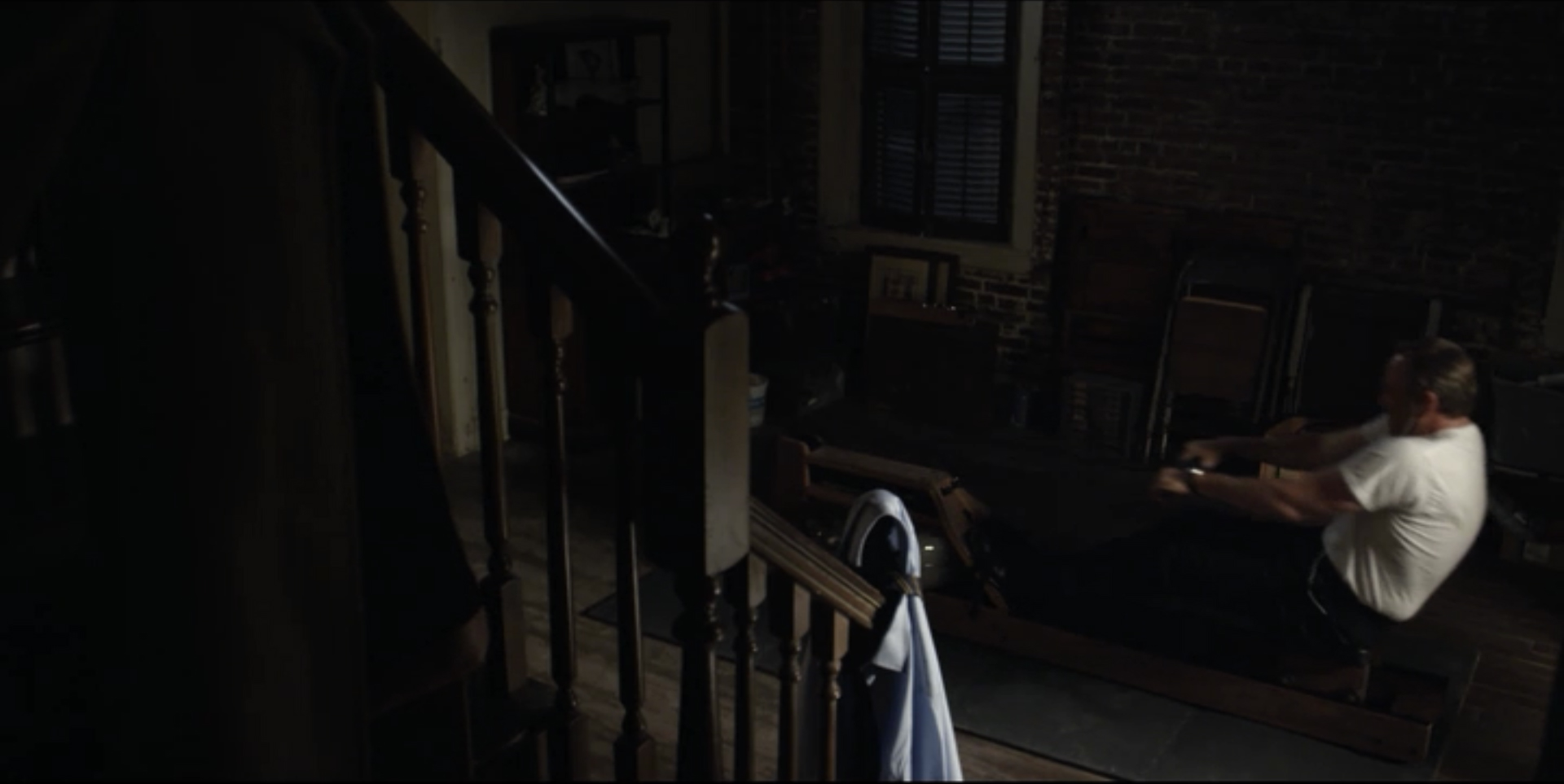 By the second episode, Francis becomes aware of his health and Claire purchases a rowing exercise machine; he of course makes a quip about being managed. Much of Francis’ frustrations during his political dealings is taken out on this machine, and hides it deep within his basement.

Representative Peter Russo, who is having a hard time with sobriety, has promised his constituents to bring new jobs to a shipyard in Pennsylvania. His sobriety can be seen as treading water, and the political strong arming that he has had to endure to get proactive shipyard job funding through could represent his inability to get a boat out on to water. Where Francis is able to glide through the water like a disciplined crew athlete, Russo just cannot seem to find a steady stroke.

This symbol also takes us back to Fincher’s The Social Network. As I explained in my article about the opening scene in The Social Network the Winklevoss Twins row crew, which is an immediate threat to anti-hero Mark Zuckerberg, long before he meets the Twins. The Twins eventually feel second place to Zuckerberg’s shutting them out of Facebook’s success, but they also come in second place at a prestigious crew race. After Francis is passed over for Secretary of State, he too feels second place, and he must do something to strengthen his stroke.

Getting back to the paintings at the museum, Francis and Zoe meet at museums in front of paintings when important information is passed along, Woodward/Deep Throat style. Each painting represents where the two are in their personal and professional relationship. Where the two are first rowing in a boat, towards the end of the season, we see a painting where a little girl lies disinterested on a couch and her dog naps in an adjacent couch; another slight towards Zoe’s childishness and naiveté.

The House that Netflix Built

House of Cards is the second of Netflix’s attempt to become not only a content distributor, but as a content provider. Netflix had acquired the Norwegian/American Lilyhammer series in January 2012, but the stepping stone to provide original content to its own DVD/Blu-ray rental and streaming service began much earlier. Red Envelope Entertainment, named after Netflix’s iconic red envelope that delivered its rented DVDs by mail, was a production and distribution arm that produced and acquired films for exclusive renting by its Netflix customers. It closed in 2008.

Meanwhile, AMC had joined the ranks of HBO and Showtime by producing its own original content, starting with Mad Men. The show became a cultural phenomenon, as did its other two original shows Breaking Bad and The Walking Dead. Since then, other non-premium cable channels have stepped-up their game. FX has begun to produce dramatic series, and other channels, which have produced original content in the past, have felt the pressure to producer higher quality entertainment. Netflix in recent years has lost much of its studio arrangements, reducing its content collection, and thus began its content creation intentions again.

Lilyhammer may have been a testing point for Netflix to provide in-house produced or acquired streaming content, but House of Cards is specifically designed to attract Kevin Spacey fans, David Fincher fans, and political thriller fans. Netflix has the unique ability to utilize Big Data, the ability for companies to mine large amounts of user-generated data to procure new products. House of Cards is just that. The real test of this Big Data-based content creation and providing will be with the return of Arrested Development. The critically acclaimed, but ratings deficient television show had a three season stint and six years of false rumors, but a successful syndication and life on Netflix has allowed the show to increase its cult-following. Netflix is not too far ahead, however. Amazon has also entered into production with six pilots, but is also crowdsourcing projects by allowing user to submit project ideas which could be optioned.

Considering that House of Cards is a deliberate product of Big Data analysis, it is a masterful series brought to you by the political serioso of Beau Willimon, the cynical underpinnings of Fincher, and precise theatrical delivery by the likes of Spacey and crew. The subplots weave in and out of each other, with seemingly inconsequential twists and turns that reveal themselves to be results of carefully executed moves several turns prior.

House of Cards has all the production value expected from quality television powerhouses like HBO, Showtime, and AMC. However, I could confidently say it will not become the cultural phenomenon like Mad Men, The Sopranos, or the like. Netflix is a beloved service—pitfalls withstanding—but it is far from a collective American experience. We do not watch its episodes together at the same time each week, only to discuss it the next day around the water cooler. Instead, a fanatic could easily watch the whole thing in less than eleven hours straight. Nonetheless, the show is addicting and its support will increase over time. 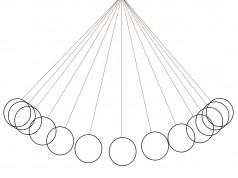 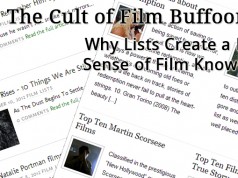