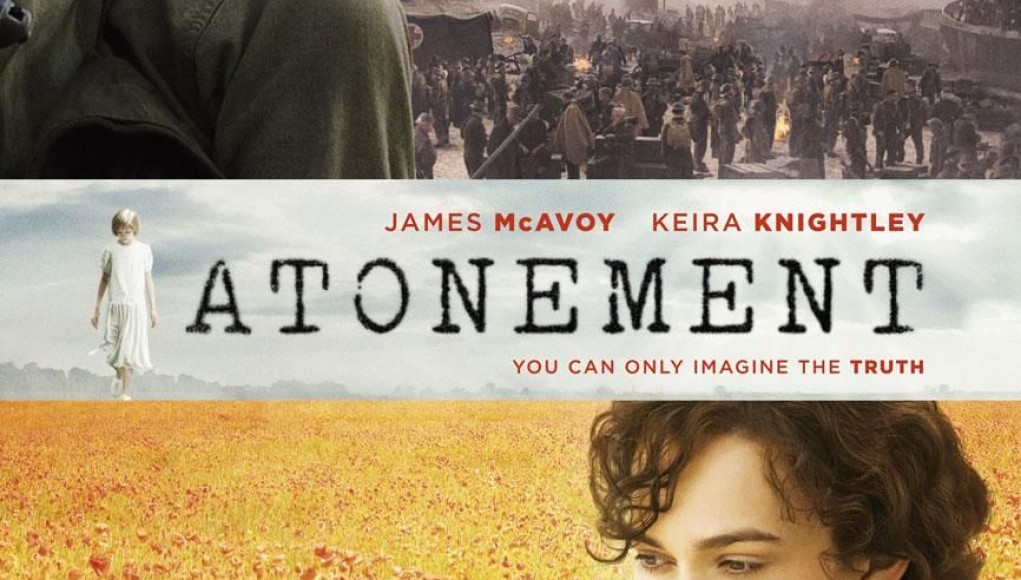 Atonement begins in pre-WWI and begins with Briony (Saoirse Ronan), a young pre-teen girl finishing her first play. Eager to show it to her siblings, she instead witnesses her older sister, Cecilia (Keira Knightley) and Robbie Turner (James McAvoy), the Gardner in a highly sexual moment. Robbie later returns home to write several drafts of a love letter to give to Cecilia. Robbie asks Briony to deliver the letter to Cecilia, however Briony ends up reading the note, only to see the word “Cunt” written. Embarrassed, she passes the note to her older sister, where she is perplexed, yet flattered by the diction.

Later in the night while searching for you twin boys in the darkness of the night, Brion’s flashlight unveils a quick glimpse of another female guest being raped by a chocolatier, who is also a guest. Briony however, believes that Robbie is the culprit, and is arrested. Quite a doozy, Huh? The rest of the film shows Robbie’s suffering as he fights for the United Kingdom in World War I. He enlists to escape prison. Both Cecilia and Briony work as nurses.

The film goes back and forth between Robbie’s suffering in war in France, including a 6 minute long tracking shot through the boardwalk and beach; and Briony’s life as an assistant nurse as London receives sporadic bombings. Briony, Robbie and Cecilia finally meet again, month prior to Robbie’s death. This scenes gives one last look at what all three have lost. Briony has last her innocence, far more than she realizes.

Briony’s character finally reveals her actions and incorrect finger pointing as she approaches the end of her life, where she is a celebrated novelist. Her actions so many years ago have made a profound affect on her current life, and her own suffering continues so due to never speaking up. Briony’s actions allowed the raped to stay raped, the innocent to suffer and love to never be fulfilled. Her tears at the end of the film seems oh so many years late, yet their sincerity ask for forgiveness and redemption.

Atonement was nominated for a 2008 Oscar Best Picture, which was essentially a race between eventual winner No Country For Old Men and There Will Be Blood. Atonement certainly had the chops to compete, but the overall hype of No Country and Blood would prove to be favored films. Atonement may be rarely discussed after 2009 since the other films mentioned will have much more historical precedence.