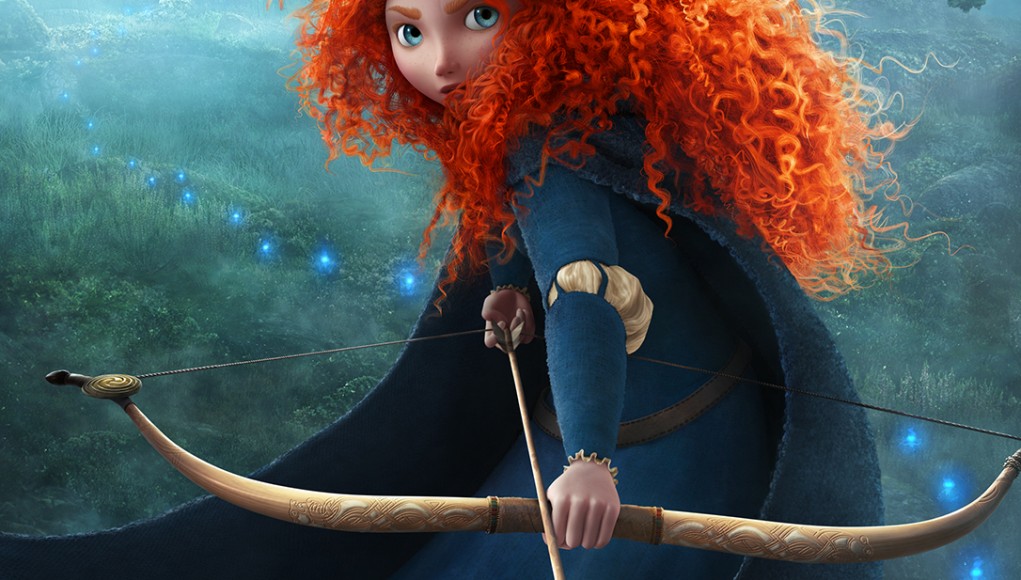 Pixar returns to their summer throne with Brave, a 2012 CGI animated film that focuses on a female antagonist for the first time. Using Scottish medieval folklore and environment for a refreshing location, Brave brings both Disney and Pixar traditions together, all the while exhibiting themes that resist such cultural traditions.

At a picnic outing, a young Princess Merida (Kelly Macdonald) is given her first bow and arrow by her father King Fergus (Billy Connolly) and chided by her mother Queen Elinor (Emma Thompson). While practicing, Merida is threatened by a large bear which is subdued by King Fergus.

Years later, Merida has become a talented archer, and her father now has a wooden leg from the bear attack, but still has hearty outlook as he rules his kingdom. Keeping up with traditions, Queen Elinor insists that Merida must choose a suitor. Not ready for marriage, Merida rebels and wishes for her mother to change and postpone the traditional marriage customs for a later date.

The basic themes in Brave are not anything new. Merida is an independent young woman who is well versed with a bow and arrow, yet her doting mother insists that she must maintain the integrity of being a princess and preserve the customary feminine profile of a princess. The blow-back is of course a rebellious attitude where Merida scoffs at being married too young, especially to the available suitors, all of whom are unimpressive.

What I certainly enjoy about this film is that lack of a love interest for Merida. So many films of this caliber require a love interest for the main character in order to move the plot forward; an accessible, relatable, and reliable narrative trait that easily woos most audiences. Here, Merida is enjoying her active lifestyle sans love. It reflects the growing interest of delayed marriage in twenty-something American society. This aspect of the film has also brought criticisms of Merida’s character expressing lesbianism and even asexuality. The dynamics between Queen Elinor and King Fergus may also reflect broader societal depictions of marriage. While King Fergus reigns supreme across the land, it is Queen Elinor who controls the castle.

Each Pixar film attempts to push the boundaries as technologies advance and audiences paw for the next gimmick. Brave introduces a more dynamic hair model as Princess Merida’s defining physical feature is her bold red hair. What is impressive and ethically pleasing is that her hair is never entirely perfect. Puffs stick out here and there, and Merida prefers it that way. The hair matches her firebrand personality of resisting conformity and her unfettered attention towards remaining active and sporty.

This Pixar effort is rather different than others. It sheds the formulaic narrative that has made some of the later Pixar films from the oughts loose too much steam towards the end. From Cars forwards (excluding Toy Story 3) each Pixar film has become more and more formulaic, typically beginning with an original premise and exposition before the plot turns tiresome and begins to solely rely on CGI. Brave on the other hand merges both Disney and Pixar traditions to form a fresh story that is equal parts lighthearted fun and a darker fairy tale in the vein of Brothers Grimm which helps insist on the urgency of the overall struggle.

By the third act, the film’s plot mostly forgets the original catalysts that set the entire narrative in motion. The feminist themes are forgotten in order for a broader interest to return to a normality in the castle, and the provider of Merida’s yearning for change disappears completely. The film’s comprehensive fairy tale concepts overtake the first act’s societal message of resisting cultural expectations disappear like the film’s will-o’-the-wisps. The film certainly has its action sequences which are mostly uninspired, and I even found myself fighting back droopy eyelids.

Then again, while Brave has an original premise and is the company’s first female protagonist, the message of the film will easily be forgotten once the summer is over. The film’s encompassing theme of being yourself and not giving into expectations of traditions will be overlooked once children return to school to be subjected to standardized tests and conformity from authority and peers. Brave is more like traditional Disney fare and has a pared down Pixar film which may leave loyal Pixar fans slightly disenchanted. In the meantime, Brave is an adequate summer film for the family that will please children more than their parents, but is a welcomed and refreshing venture overall.

Preceded by Brave is the Academy Award nominated short animated film La Luna, also by Pixar. This adorable short film is about a young boy who is a third-generation sweeper whose family is responsible for sweeping light-emitting stars into shapes into the moon’s phases.