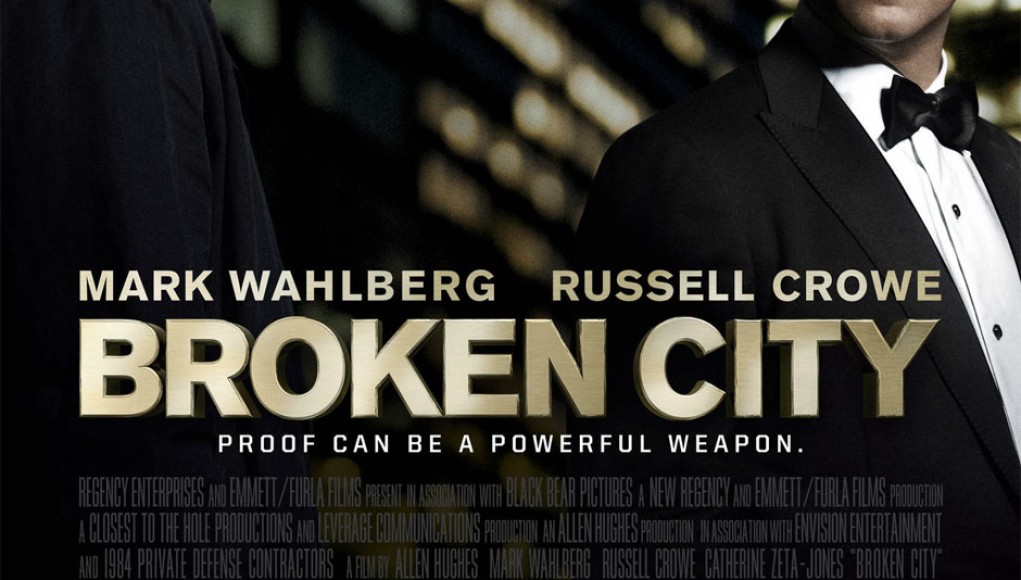 Democratic elections have become carnivals for the American public as races become tighter and information becomes more transparent. Infidelity and debt in government and our personal affairs tends to increase to our daily anxieties, and Broken City uses these culturally relevant themes in a political neo-noir crime thriller.

After being acquitted of charges of murder while on duty, Billy Taggart (Mark Wahlberg) is pushed out of the force, but Mayor Nicholas Hostetler (Russell Crowe) says he will never forget Billy’s “heroism”. Seven years later, Billy is private investigator on the brink of bankruptcy, struggling to collect from his deadbeat clients. Hostetler is the incumbent in tight race for the Mayor with a week until the election, but has called upon Billy to find who has been having an affair with his wife Cathleen (Catherine Zeta-Jones). Unlike Billy’s other clients, the Mayor has offered half the payment upfront.

While the central plot of infidelity is the red herring in the film, it is a recurring motif that affects Billy’s personal and professional relationships, as well as the public’s trust in the government. Billy’s girlfriend Natalie Barrow (Natalie Martinez) is an aspiring actress with her independent feature film debut around the corner. Billy has been suspicious of Natalie’s co-stars and is anxious regarding an explicit sex scene in the film. To make the election tighter for Hostetler, he approved a controversial sale of a public housing project in Brooklyn, which is a location that has significance to Billy’s fall from grace and his relationship to Natalie. Essentially, the film’s plot turns to explore which mayoral candidate has, or will be, unfaithful to the city at-large.

Debt is a catalyst for most of the film’s conflicts. Early in the film, Billy’s assistant Kathy (Alona Tal) is frantically calling Billy’s satisfied cases to collect on fees, a representation for the debt that Billy has yet to pay. Despite being dropped from criminal wrongdoings and deemed a hero by the Mayor seven years earlier, there is evidence against Billy that has yet to come to light. The Mayor also proclaims that the sale of the public housing project has taken the city from a $1 billion deficit, to a $3 billion surplus ready for investing in the city. As Hostetler’s opponent Jack Valliant (Barry Pepper) proclaims; why did the Mayor’s policies get the city to such a large deficit in the first place?

These political questions point to much of the same fiscal issues that have affected regional municipalities and federal since the even before Great Recession began. The external and internal conflicts, as well as Billy’s occupation gives this crime thriller an effective neo-noir foundation. Like all genre films like this, the plot spirals out of control, and a simple private investigator has been pushed into something that is over his head. Save for a few scenes, the noir elements of this film are primarily due to the film’s persistence of portraying Billy’s perspective.

The film offers some weak, eye-rolling nudges to the narrative’s more egregious plot offenses. Hostetler’s silly ten dollar haircut, like most unscrupulous politicians, might as well be a target for his character’s intentions. On the other hand, Hostetler’s opponent’s name, Jack Valliant, tends to say it all. During a heated mayoral debate, the two verbally duke it out in a scene that is reminiscent of the three Presidential debates that took place in fall 2012, especially as the mediator takes a back seat, allowing the politicians to squabble endlessly.

Despite some of the laughable plot elements and character design, the scenes with Kathy, are some of the most memorable. Kathy’s character is a strong Hunter College educated gal from Brooklyn, complete with the thick accent and terse diction, making Alona Tal is one of the most notable landmarks in Broken City, especially compared to the ordinary roles and performances by Wahlber, Crowe, and Zeta-Jones.

Broken City is one of those narratives that will always have relevance, particularly as the country winds down from another impassioned election year, and also because former New Orleans Mayor Ray Nagin has been indicted for corruption charges this past week. The film is also reminiscent of Chinatown, minus the calculated cinematography and the canonical importance to film history and culture. Aside from the underwhelming political characters, the narrative is properly developed and portrayed with adequate technical direction for an effective, suspenseful thriller.