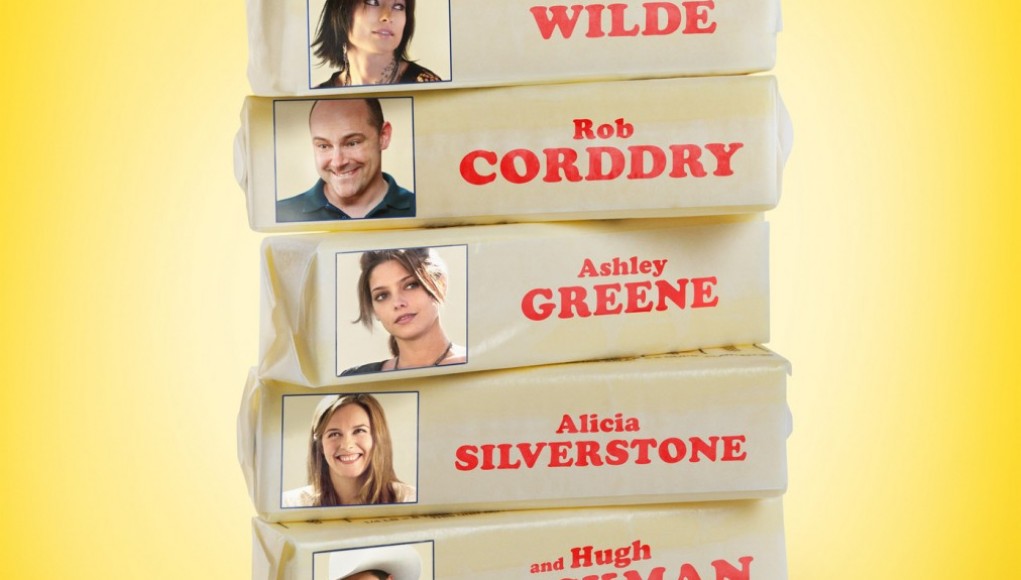 Butter is a farce placed in high gear and aimed directly at breadbasket America’s conservative hypocrisy. This 2011 film with an ensemble cast never says sorry and attempts to blasts many of the political and religious sentiments that exist throughout America’s current media outlets. Using what would typically be a banal competitive hobby, butter sculpting, this film constantly pokes fun at a barrage of characters who never seem to realize how ridiculous their actions are.

Destiny (Yara Shahidi) has shuffled from foster home to foster home with little hope until she finally lands in the hands of Jack and Jill Emmet (Rob Corddry and Alicia Silverstone respectively) who are ready to provide the unconditional love Destiny always needed, and even supports Destiny’s interest in competitive butter sculpting. Her hero, Bob Pickler (Ty Burrell) is a champion butter sculptor who has been pressured to hang up his carving tools just as his wife, Laura (Jennifer Garner), chooses to pick up where Bob left off after she catches him with a prostitute Brooke (Olivia Wilde) who was stiffed by Bob. Destiny, Laura, Brooke and a fanatic butter sculpting fan (Kristen Schaal) compete in a regional butter sculpting contest, each with their own goal in mind.

Butter is the perfect dairy product, or any product for that matter, to exemplify the American Breadbasket, obesity, and movement conservatism in general. American citizens are continuously among some of the largest, most obese people in the world. Corn and butter are items that are constantly found in most processed foods, so much in fact, they are the prime ingredients for popcorn, an American movie theater staple. Paula Deen seems to procure dishes that appear to be mostly made of butter, but this film’s characters surround butter as this illuminating product meant to be sculpted into art, then interpreted and praised. There are many seemingly mundane competitive hobbies and butter sculpting encapsulates the product that fattens America and keeps it sedated in a food coma. Butter uses this competitive hobby as the core to unite warring characters who are replacements for the warring factions in American politics and intellectualism.

The film relies so heavily on its farcical nature that the plot is messy. But the plot is not the central focus. It is how a child, Destiny, ironically shows the most maturity and intelligence of all the characters. Meanwhile, Laura, a characterchure of how modern, conservative Republicans use shady practices to skirt pass rules and regulations to surpass those who are more talented and play by the rules. Despite Bob’s stardom and success in competition he is unable to stave off the temptations of infidelity. This is an allegory for the misadventures of Tiger Woods, a pop-culture and sports icon who had been unfaithful by enjoying the services of a number of prostitutes. Bob had been mesmerized by Brooke and had corrupted the conservative values that the Picklers had portrayed to the media for decades. Not even Laura was innocent, as her own infidelity leads the Pickler’s legacy of butter sculpting into jeopardy. Bob is a superstar butter sculptor that could do no wrong, and Laura used this event as leverage to gain momentum and launch herself into butter sculpting stardom, and later politics.

Performances by Garner, Hugh Jackman, and Corddry are all reversals of their typical roles, yet they seem to be having the most fun. Schaal rehashes a similar fanatic character from Flight of the Conchords that launched her to fame. Shahidi portrays the youthful innocence and the wise naïveté necessary to drive the narrative’s contradictory and farcical nature. Burrell, like Jackman, portrays a blundering and easily manipulated male who is essentially submissive to Laura. This submissive nature of conservative males by a female character evokes the mama grizzly sensibility made by famous by Sarah Palin’s haphazard Presidential campaigns and relentless conservative mothers everywhere. Butter has excelled in replacing many real-world scandals and faux-pas with charactertures that gives the film enough weight to carry itself from beginning to end.