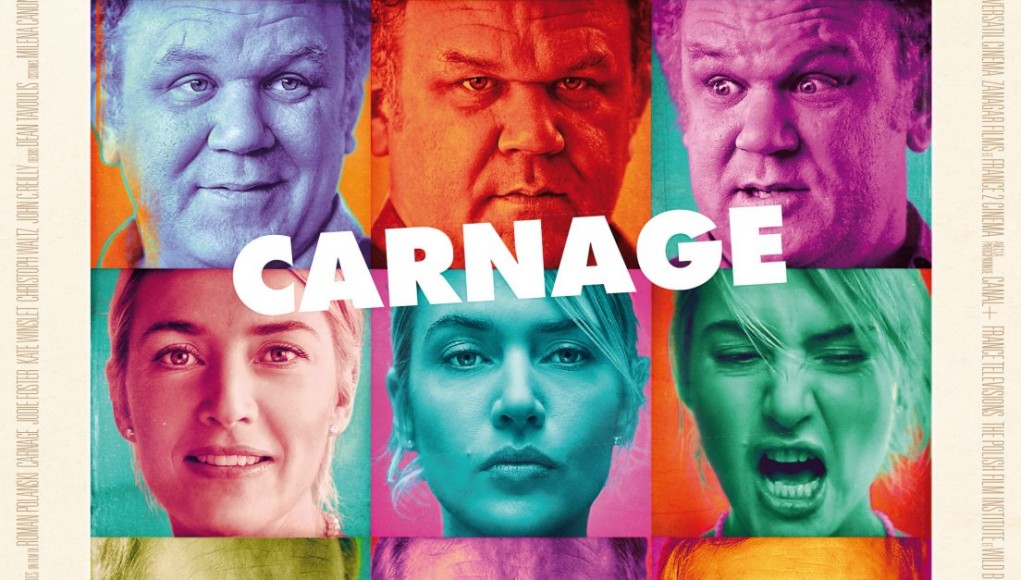 Chaplin famously said that life is a tragedy in close-up and a comedy in a long shot. Roman Polanski’s Carnage flips this saying on its ass and takes a page from Mike Nichols’ typical four-person character stories. This is the first film Polanski has made after his arrest in Switzerland and subsequent release, and the claustrophobic themes from Polanski’s life and previous films have returned.

Penelope and Michael Longstreet (Jodie Foster and John C. Reilly respectively) invite Nancy and Alan Cowan (Kate Winslet and Christoph Waltz respectively) to their house to discuss a physical altercation between their sons that resulted in the Longstreet’s son losing a tooth. At first, the four agree to a statement, but the Cowans never seem to leave and the Longstreets never seem push them out the door. For nearly 80 minutes, Polanski offers a hysterical roller coaster ride of emotions that is essentially a lovely train wreck that neither you or the characters can look away from.

The opening credits portrays the inciting incident; the two boys initial altercation. Yet the rest of the film is placed in the Longstreet’s tiny, modern apartment. The four adults express a santorum of emotions by aligning with spouses, then the opposing side’s spouse, then the same sex, and back again. This character study shows a circular method in seeing almost all sides of the situation. The arguments that erupt during the afternoon seldom return to the original issue, the consequence of their children’s schoolyard fight.

Polanski is known for his Apartment Trilogy including Repulsion, Rosemary’s Baby, and The Tenant. These films show how remaining primarily in one small area affects the psychological health of its inhabitant. Polanski has also done films that still keep most of the action in one area, including the campy Bitter Moon and Death and the Maiden. Furthermore, each of the latter examples focuses on the relationships between three or four people, often times couples, who exhibit sexual tension and envy. Polanski has not touched comedy since Fearless Vampire Killers and has since primarily focused on first-person perspective mysteries and tales of survival such as Chinatown, The Pianist, Oliver Swift, and last year’s The Ghost Writer.

Carnage, however, returns to these Polanskian themes but does something rather different. The characters in this film are not nearly as sexually charged, and the film itself is a comedy. Lastly, the film is also set in real time. For the entire film these four characters act out their repressed emotions right in front of us. These two elements are new territories for Polanski, a refreshing change of pace now that his release from Swiss prison has opened a new chapter his is life.

The performances of the four principal talents is phenomenal. Reilly does what he does best, which is being a versatile actor that can play polar opposites. Foster and Winslet feel one in the same; trapped in their lives as mothers and wives in a bustling city. Waltz portrays a cutthroat lawyer trying to keep his corporate client safe before news of their fallible product becomes public. Together, none are truly happy or upset with their lives; their misery is a product of their contentment and their sense of settlement in their lives.

Polanski’s films always have deep, wide shots that reveal a depth that few 3D films can portray. In Carnage despite the physical limitations, Polanski again uses these deep shots in the living room, keeping all four characters in frame. Furniture has uncanny amounts of depth and personality, this film should have been 3D. It is proof that Polanski is a master at his craft, and his return to comedy is a refreshing chance to see a filmmaker expand on his style, maintaining his curiosity of the human psyche, and returning to claustrophobic themes.

There is a slight suspicion in how fast Polanski made this film after The Ghost Writer and his release from prison. Except in the 1960s, Polanski rarely made a film a year. This quick turn around could spark debates about the need to fund his legal fees from his Swiss incarceration. One could only consider what he could have done with extra time, or even different material. Not to say that Carnage is a slapdash effort, it is not. It is challenging exercise that shows that old dogs can indeed master new tricks and beat younger directors at their own game. It is questionable if we can lump this new film within Polanksi’s apartment trilogy, especially since it is a comedy and never strays toward the psychological thriller that he has mastered so well.