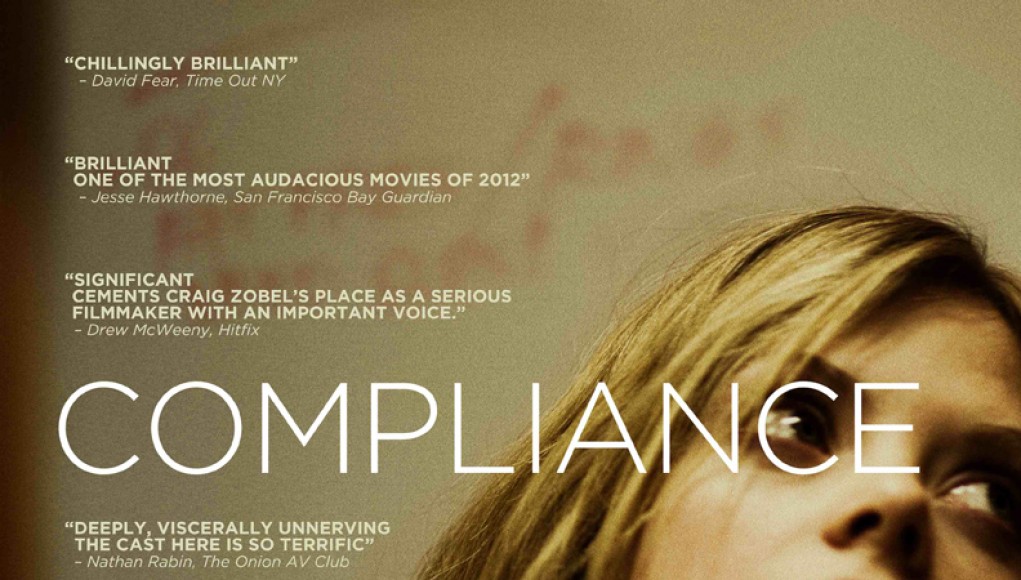 Horror films are a dime-a-dozen, but truly psychologically disturbing and suspenseful films are rarely as intriguing as Compliance. Inspired by true events, the film portrays a hoax that goes too far, invoking themes of voyeurism and psychological intimidation.

It begins like any other day at a fast food restaurant, except the freezer door was left open during the previous night shift. Manager Sandra (Ann Dowd) was able to secure an emergency delivery of the basic items, but she was unable to make common sense decisions when Officer Daniels (Pat Healy) calls her regarding a theft in the restaurant. The accused, Becky (Dreama Walker), claims innocence, but Daniels is able coerce Sandra and many others to invade Becky’s privacy and exploit her during a daylong investigation.

Based off a string of similar real-life hoaxes, Compliance is disturbing and horrific without being violent. What is truly horrific is that these events happened in real-life, and that one person can be responsible for bringing out the worst in others simply by compelling them to perform heinous acts. The film is centered around authority, and the supposed Officer Daniels imposes an intimidating voice that persuades nearly everyone he speaks with on the phone. There have been many experiments that have explored how quickly humans can turn on each other when instructed by others.

The first reaction, at least my reaction, is that these characters have a poor understanding of due diligence in justice and investigating crime. Horror films have notorious clichés, which often inhibit eye rolls. Yet, in Compliance, these are simple people as we see at the beginning of the film, more concerned about how their shifts conflict with their social lives. They may not have the sensibility to question authority and put two and two together. Essentially, Officer Daniels is able to execute social engineering to a point that is atrocious and inhumane.

Like how a sick individual impersonates an Officer over the phone, apparently very convincingly, the importance of making us believe these characters are all subjected to this bizarre situation requires impressive performances. Indeed, we are provided with some fantastic performances, particularly with Ann Dowd, who encapsulates the a common person brainwashed into heading up an investigation that leads to traumatic events. Even Dreama Walker exhibits the loss of innocence and bubbly nature her character had at the beginning of the film to become subjected to day of awful intimidation by co-workers she once respected.

Written and directed by Craig Zobel, whose past work includes Assistant Directing many of David Gordon Green’s early films and a Homestar Runner, he has arrived as a talented director able to place the camera in the most interesting areas to tell a story so harrowing in nature. Captured with a slight darkness to the frame, it does not take long before he has crafted a captivating story with suspense sans artifice. Although only present during a few scenes, a haunting, cello-dominated score ramps up the insecurity and confusion during the film.

Compliance will make you squirm and laugh nervously. As both chilling and suspenseful, the film ignites psychological questions about our own humanity. The film immediately prompted walk-outs and a vociferous Q & A session during its Sundance premiere, and for good reason. This film and the situations portrayed should cause such responses. It is awfully exploitative, only because the hoax exploited people to become their worst.

While so many contemporary horror films are so often filled with rehashed tropes and formula, Compliance, although inspired by real events, is horrific because it tests humanity further that horror films have. In the end, the film will continue to divide many while raising issues of voyeurism in our society and in cinema.