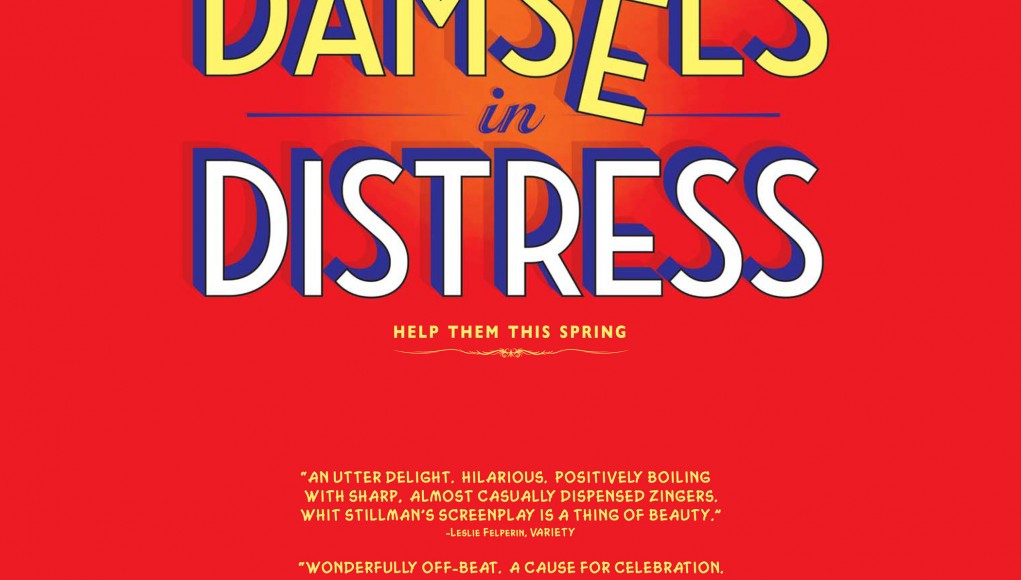 Auteur Whit Stillman returns for his fourth film after over a decade with a new comedy of manners. Damsels in Distress shows how Stillman’s style and topics of choice have retained consistency along with the evolution from his previous projects. Quirky, sensible, and certianly high brow, this film aims its scope directly at the pretentious as much as it does the low brow characters Stillman wishes to chide.

Violet Wister (Greta Gerwig) and her roommates Rose (Megalyn Echikunwoke) and Heather (Carrie MacLemore) romanticize the days of decadence at Seven Oaks College. They adopt the newly transferred Lily (Analeigh Tipton) as a new roommate and to preach their stand on changing the campus from a undereducated, brut cesspool to a campus where the most delightful smells linger in each hallway and each fraternity uses soap in the shower. The four women fall in and out of love with a variety of men that bring the women closer and sometimes apart.

Violet and crew are particularly interested in improving the lives of others. They run a sucice prevention center, armed with donuts and coffee, and encourage those that are not “distressed”, but those in a “tailspin,” to partake in tap dancing classes which scholarly articles have suggested relieve stress. Violet herself has had to reform herself from a young age, and her change in identity mirrors that of a male romantic interest she meets later in the film. While Violet and her followers express interest in the finer things in life, they are sympathetic towards the Roman fraternities. That is right, Romans, not Greeks. Seven Oaks College has Roman fraternities, of which, Violet champions because she believes that they deserve the benefit of the doubt that they can be reformed. As an example of the lack of rudimental education that the girls yearn to change is in Thor, a member of a fraternity who is unable to identify colors.

Violet stands on a unique ground that exists somewhere between romanticizing the days of decadence and elitism. She makes her case to college’s alternative newspaper to not attack the Romans or have them kicked off campus, as that would be an reactionary elitist attitude. Instead, she wishes to softly coddle them with political correctness and education. Talking about education, the Seven Oaks is home to a incredibly suicidal body of education majors. These students have realized long before their first days of teaching that their interest in educating the children of America is a lost cause; thus they jump off campus building like lemmings.

Stillman’s previous films have all been a comedy of manners, but none have been as sharp as Damsels in Distress. His films portray twenty-something intellectual, upper-class men and women who struggle to find their place in society, and this new effort pushes Stillman’s interest on identity of twentysomethings to a new extreme. His previous films all deal with intelligent young men and women finding love and new mediums to indentify with. The Last Days of Disco explores the rise and fall of the the disco scene and compares it to the friendships that both mend and break apart. The difference between this film and his others is the extreme amount of decadence, specifically in the last third of the film where Violet yearns to introduce the Sambola! as the new dance craze. Silly Violet, dance crazes evolve and are not to be invented.

One of the most memorable inferences regarding the decline of decadence is from one male character Charlie. In the film, he notes that homosexuality used to be hidden, and in turn would be expressed with refinement. Whereas today, the “outed” prance around in T-shirts. While I’ve certainly paraphrased the dialogue, and certainly do entirely agree—or truly know for that matter—it is a rather through-provoking comment that is just an example of the loss of decadence that Violet is attempting to redeem around her. The film presents differing thoughts such as these not in order to indoctrinate, but to provoke. The precocious and pretentious in this film are balanced with the unassuming and rational.

Mumblecore queen Greta Gerwig easily disappears into her role as Violet. She is surrounded by fantastic supporting actresses who color Violet’s world and back her at all times. Arrested Development‘s Alia Shawkat makes a brief cameo, barely recognizable compared to her mid-teen role in the cult television comedy.

Stillman is not at all subtle about his cinematic influences. Posters for Grand Illusion and Max Ophuls’ Lola Montès make appearances in the film. These references are noteworthy as Stillman himself uses calculated cinematography, just as Ophuls and Renoir. Scenes are strictly composed, balanced, and precise, just like the girl’s enunciation, ethics, and fashion. The world in which Stillman has created is a world I wish I could return to repeatedly. It is a lovely reversal of Clueless dressed in English literature references and romanticism. Damsels in Distress features a clever world of an isolated college such as Seven Oaks where the whimsical and the intellectual comfortably commingle. It is no doubt where Wes Anderson and Noah Baumbach have found their influence, which may be in turn influencing Stillman.