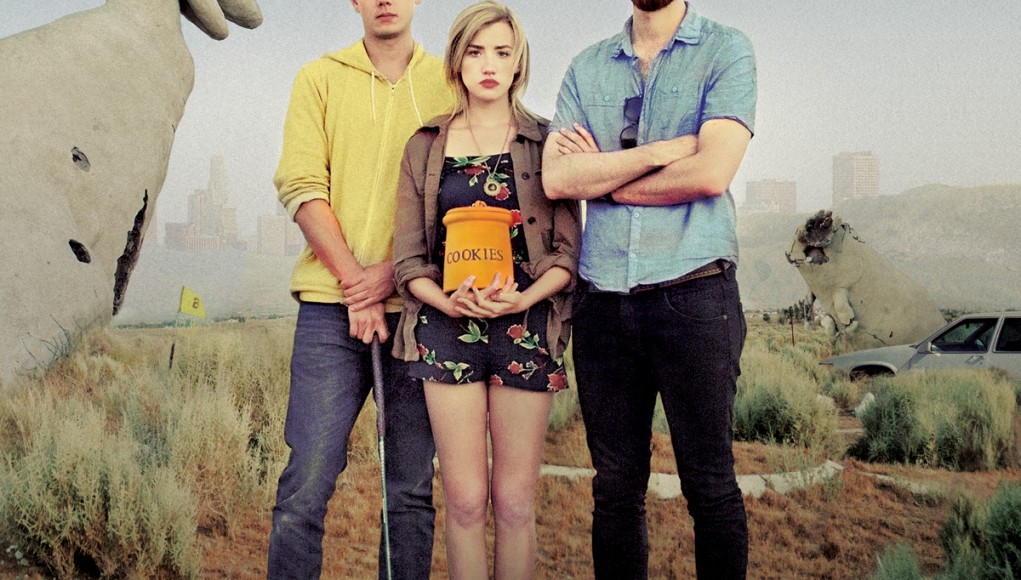 Majority of the independent film submissions that I receive from desperate independent filmmakers are, for the most part, awful. Every once in a while there is a gem that arrives, re-establishing the little hope I have for grassroots independent production. Dead Dad is far from perfect, but the encompassing theme and story is straight out of a contemporary generational novel and efficiently resists independent film clichés.

The bearded Russell (Kyle Arrington) happens to discover his father’s dead body in a recliner during a routine visit. The morning of the memorial service, he picks up his estranged adopted brother Alex (Lucas Peterson) nearly an hour late from the airport, the two arrive just in time for the service. Their estranged sister, aptly nicknamed “Chainsaw” (Jenni Melear) has arrived just after the service because Russell had honestly forgotten to send her the address. The three have been mutually given control of the house and the rest of their father’s estate, and per their father’s note, are responsible for choosing the right location to spread their father’s ashes, which are currently interred in an cardboard archival box.

The three siblings are obviously rather different in personalities. Russell, seemingly the main character, is incredibly care-free and unorganized. He searches frantically in his car’s messy truck for insurance papers after the service, finally handing over the battered form to their attorney. Chainsaw is fierce and angry, exemplified by her vociferous outburst after finally arriving at the correct funeral home, and her sexual side adventure with a former lover. Alex is first seen dressed in a suit, waiting patiently at the airport for roughly an hour, and rather content despite his lengthy wait.

Then there is Russell’s girlfriend Allyn (Hailie Tyler) who is unknown to Russell’s siblings, and first meets them briefly after the memorial service. She represents the distant yearning for the three siblings to conclusively connect. In order to finally meet and get to know her boyfriend’s family, she cooks a feast for the three, only to find that Chainsaw and Alex had chosen to wander about their hometown.

The three siblings tend only enjoy each other’s company when they drink together, except for a mutual friend’s son’s birthday party when a three-sided confrontation occurs towards the end of the film. The three have yet to understand that their estrangement has exacerbated their differences, unwilling to accept each other’s life decisions. Several times during the film the three depart under angry circumstances, increasing their inability to meaningfully connect and explore their disparate emotions surrounding their father’s death.

Dead Dad is a purely independent production, filmed during nights and weekends over the course of one month on a rather shoe-string budget of $25,000. It is easy to lump the film in with many other fledging independent films, but Dead Dad is commendably well produced and captured. The picture’s tone is on the border of ethereal with an inkling of hyper-realism. It is crisp and clean, even if the main characters are resentful and unforgiving.

The film uses handheld camerawork like so many other films do today, usually tempting to portray a sense of urgency. Here, the camerawork represents the unsettling nature of their father’s death on the three siblings, whose mother had passed away much earlier. There is no urgency in this film, just a focused interest in finding the right time and place to relinquish their father’s ashes to the world. What continues the unsettling nature of the film is the motif of the mother’s band, whose song makes several appearances during the film, particularly when it is found stopped mid-song in their father’s tape deck. The song harkens to the style of the Velvet Underground, of which tended to produce rather haunting songs to begin with. The song becomes a familiar tune throughout the film, but haunts Russell, and perhaps haunted his father has he clung to alcoholism and prescription drug abuse after his wife’s death.

Dead Dad succeeds effectively as it is rather original, even if there is a minute relationship to the Duplass Brothers’ Jeff, Who Lives at Home, where there is an overwhelming need for a family to re-connect as the memory of a deceased father lingers. The film also tends to borrow from the end of The Big Lebowski, but is able to resist falling into pure theft. Dead Dad is conclusively a sincere film about disparate siblings reconnecting through the resolution of their father’s estate. It is original in its inherent tone and atmosphere, and the passion and resourcefulness of  filmmakers is translated to the film, making for a heartfelt story about twenty-somethings entering into new chapters together.