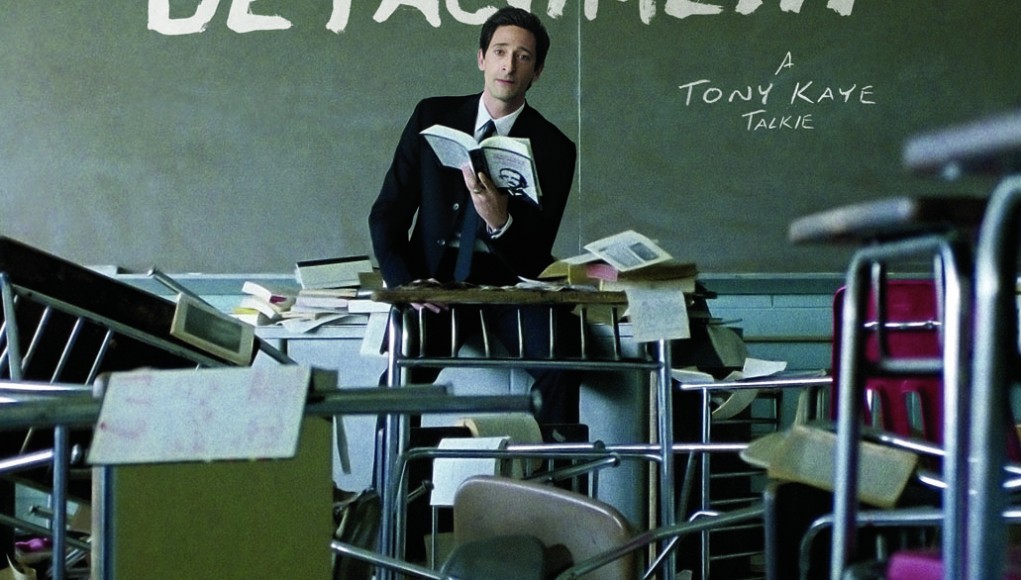 Substitute Henry Barthes (Adrien Brody) is called upon to teach a rambunctious high school English class for a month until a permanent replacement is secured. His pedagogy is not to fight his pupils with fire, but with passion and respect. As other teachers and instructors continue struggle with the complacency of students and their parents, Henry uses compassion to reach out to young people in and out of the school, such as bringing in a young prostitute (Sami Gayle) into his apartment.

Henry begins a relationship with another teacher (Christina Hendricks) while other teachers struggle to emotionally remain attached to their job that was once a calling. Lucy Liu is a guidance counselor who is hurt by the lack of aspirations of failing students who come through her office. She confides in James Cann’s character who deals with the same disappointment through antidepressants, and shares his longevity with the romantic Blythe Danner. Lastly, the school’s principal (Marcia Gay Harden) is being pressured into retiring as her passion for the occupation has obviously dried up.

Detachment exposes the American high school system as broken from top to bottom, with executive board members making decisions based on the property values, parents who find excuses for their own children, who in turn who lack respect for themselves or others. Henry has a month to flip his temporary class upside down, a concept that is not new or original as films such as Blackboard Jungle and Lean on Me have provided similar premises. However, Detachment places a crisis that has bled-out through the decades into a contemporary arena.

Director Tony Kaye has a talent for damning American institutions, whether it is racism (American History X) or the overwhelming failures of American public schools. Detachment utilizes a very dark, hand-held camera work that encapsulates the crushing inability for characters to connect to each other. A deeply wide angle lens exposes how deep these characters keep themselves closed off in corners.

Detachment will remind viewers of Brody’s talent. His roles since his Oscar-winning performance in The Pianist have been hit or miss, but here he exploits his sad eyes as a loner who can only help others to a certain point. Mad Men fanatics will see Hendricks in a toned down appearance, but in her most active role to date. Brody and Hendricks are among the most prevalent of the performers, but the whole cast shines, even Bryan Cranston makes a cameo performance that draws chills. Then there is Sami Gayle, the child actress who portrays the young prostitute and does so with precision; she is an actress to watch in the future.

The American school system has become an easy target the past few years. Documentaries such as Waiting for Superman and The Lottery have both favored passionate charter schools over dilapidated public schools whose parents, students, and teachers are equally responsible for disappointing results. Here, Detachment brings the issue to the ground level. Gone are Dead Poets Societies, the Lean on Mes, being a teenager changes so quickly from generation to generation, even I, just nine years out of high school, can barely relate to teenagers today.

But Detachment has a shed of hope for teachers and students, even with the constant melancholy and depression, and all the way through its fatalistic climax. Henry is a passing ghost in the halls of the school; he is the only one who acknowledges every student and teacher’s existence, even if he struggles with his own. One scene has a teacher clutching to the chain-link fence as if they were imprisoned, but when Henry approaches and asks if he is okay, the teacher is shocked that Henry can see him. “Of course I can see you.” Essentially, the characters in Detachment are suffering from the lack of respect and acknowledgement from each other, and it takes a temporary savior to bring that respect back into the school system.