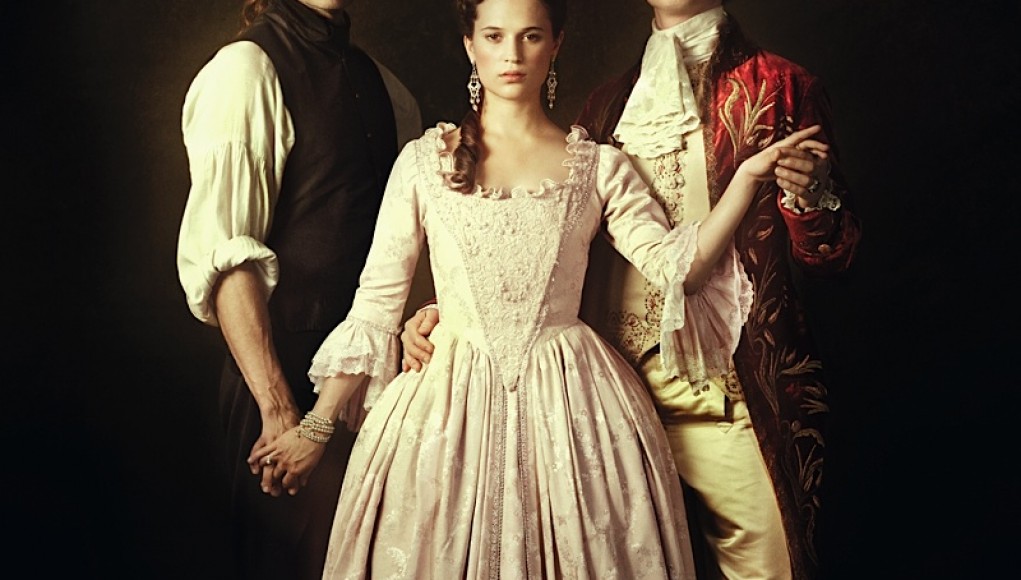 Some of the most important moments in European history happen to be some of the stranger stories, even if it pushes Denmark into the Age of Reason. A Royal Affair (En kongelig affære) depicts the historical love triangle between a mentally ill King, a Queen, and a physician, all who eventually pushed for sweeping progressive reforms throughout the kingdom. Written by Nikolaj Arcel and Rasmus Heisterberg, the same scribes who penned the 2009 The Girl with the Dragon Tattoo film, A Royal Affair is surprisingly adept at presenting interesting information while focusing on the central love affair.

British royalty Caroline Mathilde (Alicia Vikander) has been aware that she was to wed her distant cousin, King Christian VII of Denmark (Mikkel Følsgaard), for many years. When that day came, at the age of 15, she realized that Christian was far from a normal functioning adult as the King exhibited strange, childish, and impulsive behavior, especially when it came to their sexual encounters. Johann Friedrich Struensee (Mads Mikkelsen), an Enlightment-influenced German physician, is tapped to be the King’s personal physician, and in-turn becomes a friend and positive influence on the King, as well as a lover to Queen Caroline Mathilde.

A Royal Affair depicts a country at cross-roads during the Enlightment period, and a precarious moment when the influence of one man gave Denmark its first taste of intellectual freedom. Just after the first moments of Caroline Mathilde’s arrival, she is told that the books she brought from home were to be subjected to censorship. Along with her abandonment by her husband, she sees first-hand how antiquated laws and a mentally-ill King can reign with havoc on people in and out of royalty.

Christian’s court looks down on Christian’s promiscuity and childishness as King, and much of the country’s business and social wellness is done without him and under his nose. For good reason, Christian interrupts royal theatre performances and makes many embarrassing scenes at formal occasions. Despite his innate behavioral problems, he does tend to have moments of clarity and even a sense of Shakespeare. Joahnn’s ability to recite Shakespeare is what helps the two bond, and Johann’s penchant for Enlightment thinking becomes influential to Christian making sweeping progressive declarations across Denmark.

Yet, Johann’s influence on Christian also finds its way to Caroline Mathilde. She is emotionally abandoned by Christian and despondent to her position in the palace. Christian begs Johann to make her a “fun Queen,” and it is Johann and Caroline Mathilde that end up having all the fun. Christian seems to be the most delighted when he realizes his progressive laws are doing social good, and even develops his own ideas for welfare without Johann’s influence.

Despite the uncanny love affair and the progressive social reforms explored in the film, A Royal Affair has a lifeless and gloomy nature. The film itself is brooding as much as Johann does when subjected to Christian’s immature tirades. Granted, the film is lush in cinematography and features unabashed production value and design. To see a King with mental-illness rule a vast kingdom is sad indeed. Knowing that, even with the influence of man with scrupulous intentions such as Johann, a ruler of a nation is so easily provoked is unsettling. Yet, these are the tales that have shaped nations, and Denmark’s entrance in to the Enlightment is a scandalous one.

There is a perfect shot where the three sit together, with Christian holding the hands of Caroline Mathilde and Johann on either side of him. It exemplifies the lack of awareness Christian has over his kingdom, let alone his own residence. A Royal Affair, even at its two hour and fifteen minute run-time, has an occupied plot, often going back-and-forth between Caroline Mathilde and Christian’s occupations, with Johann of course in the middle. It is a stunning and amazing that such progressiveness was the result of both infidelity and friendship. 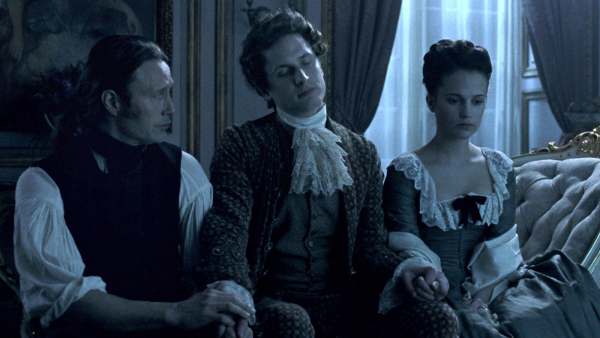