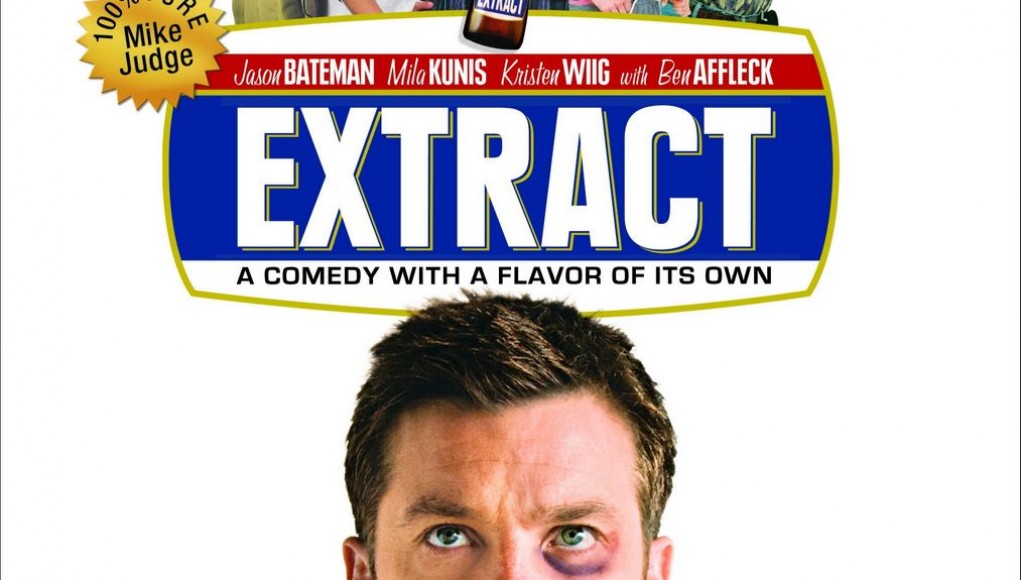 Mike Judge is either known for his comedic brilliance or for the downfall of decency in American television. Either way, Judge has created some of the most important characters in American popular culture including the prime-time cartoon sit-coms Bevis and Butthead and King of the Hill, and commercial failures that ultimately led to high cult status such as Office Space and Idiocracy.

Extract is a different breed, however. Judge has created a little niche in character and story creation that revolves around middle-class imprisonment during the working hours and how we are then subjected to our own productivity in the media and in consumer products. Extract may as well be the height in Judge’s typical signatures and topics. Armed with an ensemble cast, Judge as director has more control than ever before, yet fails to deliver the same clever comedy of his previous films offered.

Joel Reynolds (Jason Bateman) is the owner of Reynolds Extract which packages flavor extracts. While proud of his accomplishments as a business owner, his sex life with his wife, Suzie (Kristen Wiig), is lacking and his neighbor, Nathan (David Koechner) annoys him to no end. The extract factory works smoothly and efficiently with the employees working nearly as automated as the machines. Until one day when Mary (Beth Grant) is annoyed at fellow metal-head slacker/fork-lift operator Rory (T.J. Miller) who holds up the line when promoting his five grindcore bands. The assembly line backs up, creating a domino effect which ultimately leads to Step (Clifton Collins, Jr.) losing a testicle while on duty.

After a drunken night with some accidental Special K consumption thanks to his friend Dean (Ben Affleck), Joel hires teenage gigolo to seduce Suzie and prove her infedelity. The next morning Joel realizes what he had agreed to the night before and attempts to stop it with no success.

All the while Cindy (Mila Kunis) is a con-woman who is wreaking havoc across the city, is turned on to Step’s accident and realizes the potential of monetary gain. Step initially agrees not to sue the company in lieu of a modest settlement to ensure that a purchase from General Mills remains on the table. Cindy begins to work for the factory and starts dating Step, all the while flirting with Joel. Cindy convinces Step to hire Joe Adler (Gene Simmons) a low-ball lawyer to sue the company into bankruptcy.

The ensemble cast includes an excellent mix of talents, however mostly dominated by typecasts. Jason Bateman has forever been framed as the rational good-guy business person we have all come to love in Arrested Development. Here, his character is rather flat and mostly adequate. Gene Simmons plays up the ambulance chasing lawyer to a tee. Affleck, Kunis, Koechner, Wiig, Simmons and nearly all the factory employees assist in creating plausible cast of characters that are not too similar to those found in King of the Hill and Office Space. These talents disappear behind their famous faces and pose as characters in which we see in every day life.

The plot structure at the beginning of the film is excellent. Beginning with Cindy’s first humorous exploit and the introduction of the factory and workers, Judge sets up a solid premise. As the plot unfolds, the story becomes relatively predictable and the dialogue between characters. Cindy’s first two scenes in the beginning of the film are excellent and anticipation on how her storyline will mend into the main arc falls flat. Her disappearance from the rest of the film, including the lack of any justice is inexcusable.

Judge returns to many of the themes and motifs that are found in his works particularly how American workers tend to be prisoners at work and forever imprisoned by the media and product consumption.

Where Office Space and Idiocracy failed miserably during their theatrical run, they were able to find an audience on the home video market, leading both releases to cult film status and a barrage of memes and quotable lines. Extract on the other hand met the same theatrical gross as Office Space, yet there doesn’t seem to be a second-life on the shelves of die-hard Judge fans. Regardless, Judge is perfect behind subtle comedies like these, but Extract fails to provide long-term replay value. If you love goofy antics found in many of Judge’s characters, Extract is worth at least one screening.