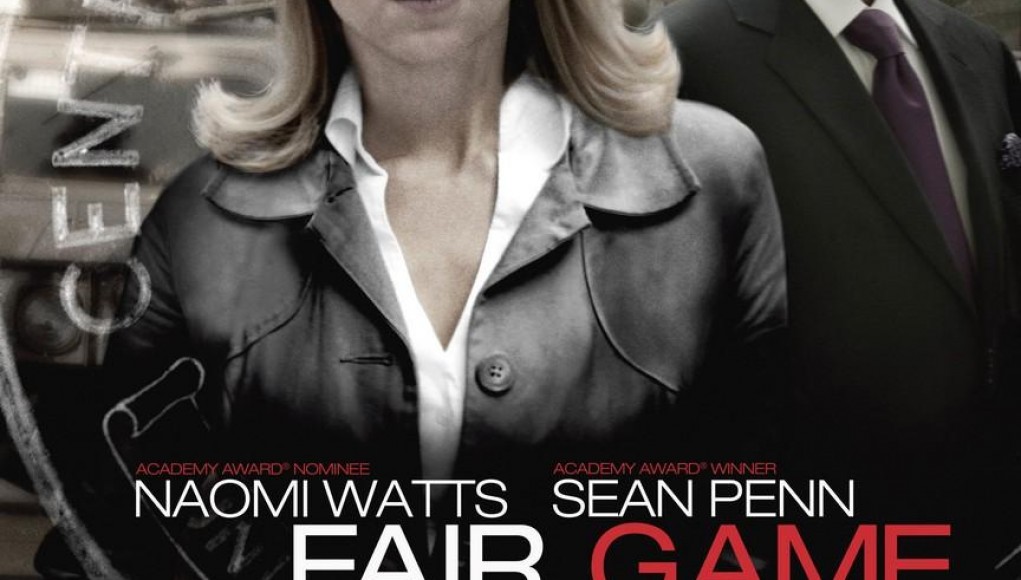 Fair Game is the true story of Valerie Plame (Naomi Watts) and her husband Joe Wilson (Sean Penn), whose inflammatory article in the New York Times discrediting the White House’s claims about WMD’s in Iraq led to Plame’s exposure as a CIA operative. Outed and abandoned by the government, Plame and Wilson are left to defend their names and reveal the truth regarding America’s invasion of Iraq. As a result, their marriage suffers, and the film questions the tenets of loyalty; loyalty to family, to friends, and to country.

Timely and taut, Fair Game is an exceedingly well made political thriller, using fact to compel the audience to anger and motivation. Being of sound political ignorance, the minute details regarding the War in Iraq have been of only passing knowledge to me. The question of whether or not WMD’s exist is not my issue to debate. The film believes they do not, and I believe in the film’s conviction and claim to accuracy. It is good at inspiring debate, and I was on board the entire time.

The first half of the film deals directly with the CIA’s involvement in finding yellow cake uranium, with Plame leading up the investigation in Iraq. On her personal recommendation, Wilson is sent to Niger, Africa to investigate a supposed transaction of uranium to Iraq. When his findings come up negative, White House officials (namely Scooter Libby, Dick Cheney’s right hand man) begin investigating their findings and jump to conclusions using unproven claims regarding materials fit for nuclear weapons.

Wilson, against various advisors’ wishes, cannot stay quiet regarding the issue. He thus reports the now famous article entitled “What I Didn’t Find in Africa”, which discredits White House officials and questions the invasion in Iraq. Forced into a corner, Libby strikes back, coordinating a smear campaign against Wilson which leaks Plame as a CIA agent.

From here, the film tracks the disintegration of Plame’s marriage and Wilson’s fight to maintain his cause. Could Wilson’s act be considered selfish? He knowingly put his wife in a position to be compromised and threatened his position as U.S. Ambassador. On the other hand, the government was potentially invading a country for no legitimate reason. Who’s on the right side of the coin?

Plame isn’t safe from these ambiguities either. During her time in service, she’s constantly putting her family second. Living life by way of 3 a.m. flights and covert operations, the nation’s interests are of top priority for her. When she is revealed to be an agent, she begs Wilson to stop his crusade for the sake of their family, believing the CIA will take care of their situation. Both face incredible hardships, and learn quickly that the only way to survive the lions den is to fight back.

Fair Game strikes an interesting balance between Plame’s home life, the situation in D.C. and the violence in Iraq. Prior to her disbandment, she promises asylum to scientists in Baghdad that could be the key in proving the absence of WMD’s. Once she loses her authority, they protection she offers suddenly becomes mute. This leads to some tense sequences during the bombing of Baghdad, and director Doug Liman’s (The Bourne Identity) action roots are surprisingly subdued. Opting for a more personal approach, he never relies on big set pieces to relay danger, always focusing on the character’s immediate environment to generate suspense.

One bravura sequence illustrates the power of sound and suggestion as said scientist tries to escape the city during a gunfight in the streets of Baghdad. Seen only from the backseat of the scientist’s car, we’re led to imagine the chaos outside as the camera ducks for cover. It’s an action beat that relies solely on tension and reaction, and it’s incredibly effective.

Much of the film’s strength comes from the sheer intensity of the performances. As Plame, Naomi Watts (Mulholland Drive) slowly loses her strong-willed demeanor and slips into a state of paranoia. Scared for the life of her family, she finds herself alone in a world of suspicion. Watts is reliably strong here, and reminds me all over again why I loved her work in the first place. When Plame finally breaks down after all seems lost, you believe her raw emotion. It’s a powerful performance.

Also integral is Sean Penn as Wilson. Bullish and outspoken, he fights the government tooth and nail and stands by his findings. It could be argued that his pride gets the best of him, but Penn’s intense portrayal is nothing short of compelling. No one does dedication like Penn, be it in Mystic River or Milk. He’s a hell of a performer.

As stated before, this is a timely film that’s sure to spark debate regarding our position in Iraq. Some believe going in was a sound cause, whereas others will side with the stance the film takes. War is, by nature, disagreeable and politics are usually underhanded. To watch this film and not be compelled is a pretty hard feat.

Aside from the governmental corruption explored, the film makes a far more pressing argument: how far should one go to defend their beliefs? What’s the furthest one can push the system to achieve results? What price does one pay for pride? For country? For family? For a name? A name is the one sure thing we have, and what does one do to maintain that?

The filmoffers no easy answers, and it doesn’t have to. It stands as a great thriller, exceedingly well made and taut from start to finish. It’s sure to incite debate amongst viewers, and that’s the best compliment I can give it.