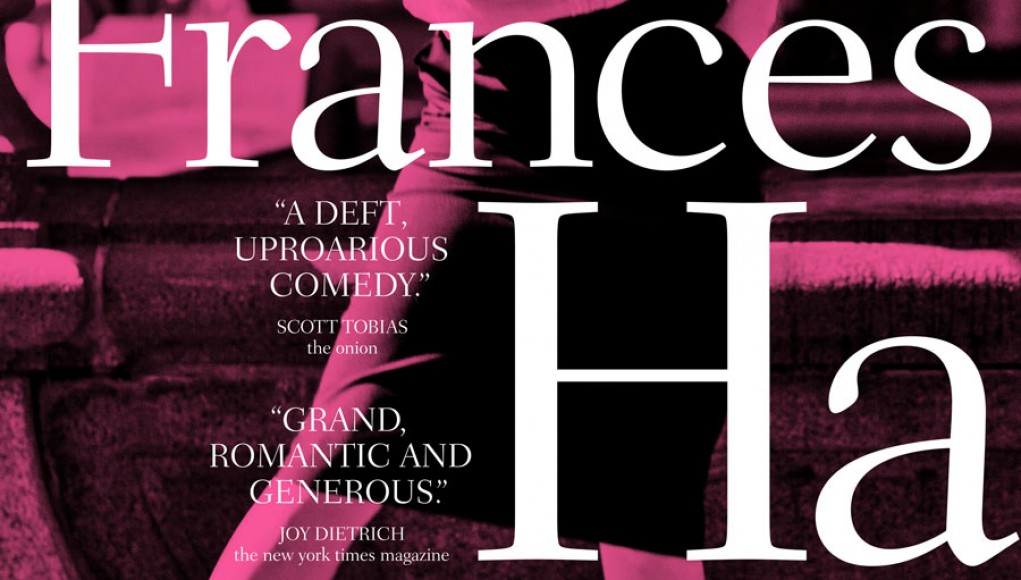 Director Noah Baumbach’s films tend to be dark comedies with defeated protagonists struggling with constant familial issues, often times at a crossroads in their life and/or career. His previous film Greenberg was one of his darkest and most anxious to date. With Frances Ha, he is reignited with a more lighthearted effort that is heavily influenced by the French New Wave. Shot in black and white, the film tends to mimic the youthful exuberance of the Millennial generation as they begin to find themselves not exactly young anymore.

Frances (Greta Gerwing) is an apprentice at a dance company and struggles to keep up with the competitive nature of the industry. After she awkwardly breaks up with her boyfriend, her best friend Sophie (Mickey Sumner) notifies Frances that she will be moving in with her boyfriend, leaving Frances out on her own. To make things worse, Frances is told that her services will not be required for the upcoming annual Christmas production, although something might open up at the beginning of the year. Until then, she is effectively jobless and without residential accommodations. As she wanders through the Brooklynite social spheres, where everyone seems to be successful, she maintains an optimistic outlook, but continues to be impulsive and self-destructive.

Frances Ha is that ode to the French New Wave that filmmakers tend to make after they have completed film school. Except this film is much better than Baumbach’s own first film, Kicking and Screaming, which was released nearly twenty years ago. The film keeps a fast pace and tempo thanks to the New Wave influenced jump cuts and charming gags where there is an aire of sympathy and relevance. The jokes and gags are quick and adorable and mesh well with the plot, which feels like a cross between Whit Stillman’s Damsels in Distress and Lola Versus, both of which star Gerwig. Of course these comparisons tend to question whether Gerwig is typecasting herself, touching upon self-parody, or exploring that time in a woman’s life after she finishes college and before she finds a comfortable groove in a career.

Frances is the epitome of the Millennial generation’s trials and tribulations. She is among many who have found themselves stuck in post-collegiate life. Her apprenticeship is drying up as she becomes too old and stumbles awkwardly through understudy rehearsals in the same manner she stumbles through life. The film is segmented by chapter breaks based on her present address, whether it is a chic Brooklyn dig or a dormitory when she lands a gig as a Resident Assistant at her old college. She is also stuck because the economy has tanked, and even the dance company she belongs to is struggling to maintain its solvency.

One scene that seems to stick out is a conversation between Frances and a younger female that her new roommate, Lev’s (Adam Driver), had slept with the night before. This younger female, with the same speak-before-you-think impulsiveness, offers a backhanded compliment to Frances; that she seems young, but looks older. It is the perfect line that sums up Frances, her generation, and perhaps the film. Frances Ha is a youthful and charming film, but is deeply attached to the French New Wave aesthetics and style. Furthermore, Frances Ha is a much smaller film than Baumbach’s previous films, which have featured A-list stars in his signature character studies. It might appear to be a step backwards, but it is a refreshing step in a new, refreshing direction.

Gerwig, who co-wrote the film with Baumbach, made waves in a handful of low, or no-budget Mumblecore films before moving up to more Indiewood fare. The Mumblecore style was influenced by filmmakers such as Whitman, Wes Anderson, and even Baumbach, but utilized the Cassevettes’ DIY aesthetics to tell modern coming-of-age narratives, and make use of consumer-grade digital equipment. Here, Gerwig exudes childishness friendship with Sophie as they play fight in the park and smoke cigarettes outside their Brooklyn apartment window. This same freedom and carelessness with her career takes from these Mumblecore and French New Wave sentiments but adds to it and takes it into a contemporary dimension where there is more disparity between classes.

Frances Ha seems to be careless with its camera work, but it is merely a ruse. Baumbach’s cinematography is strictly composed. At first it feels clumsy, in order to represent Frances’ early carefree nature, but evolves with her situation. The film ends like a grand masterpiece would, by perfectly wrapping up the film’s themes and leaves no lingering questions. Unlike any of Baumbach’s other films, even though Frances’ is in crisis most of the time, there is nothing downtrodden or anxious about Frances Ha. Perhaps the “Ha” says it all, that this comedy is charming, adorable, and fun, perhaps a prediction that seemingly doomed generations will be just fine, despite the fleeting concerns for their future.