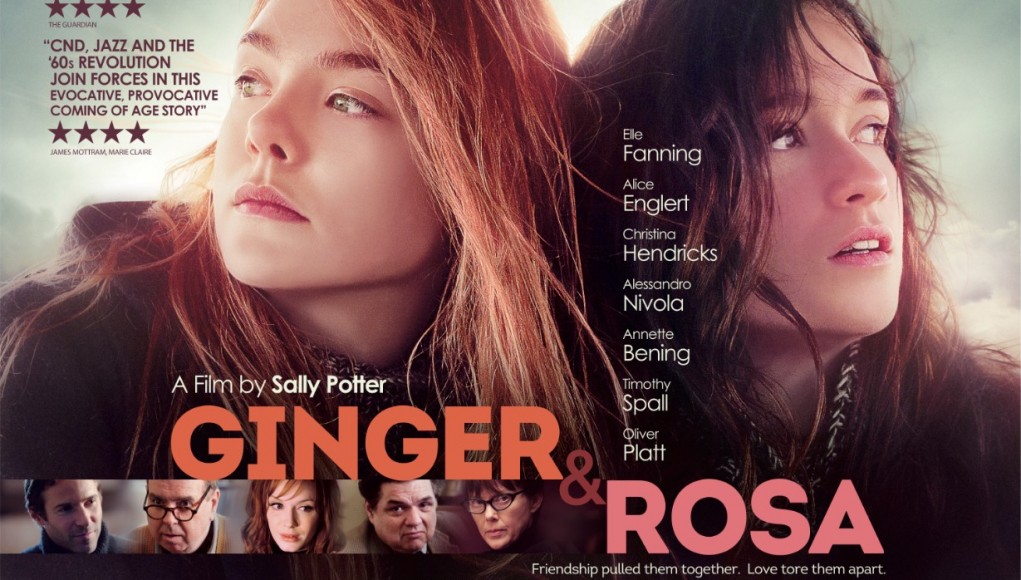 The first images of Ginger & Rosa are of slow motion close-ups of the infamous nuclear tests, complete with its uncanny mushroom cloud and plumes of smoke. These images are of both power and frustration; that humans can create something so destructive, and at the same time, use it as a political device. Sally Potter’s 2012 coming-of-age film explores the anxieties of nuclear war on a teenager in her politically and sexually formative years, and how it parallels the frustration of separating parents and the chance to become a part of a cultural and political activism that is bigger than oneself.

The mothers of Ginger (Elle Fanning) and Rosa (Alice Englert) were holding hands at the moment the two girls were born, and the two would remain inseparable friends; they might as well be sisters. Tensions between Ginger’s mother Natalie (Christina Hendricks) and father Roland (Alessandro Nivola) cause the two to split. Ginger begins to take an interest in activism, leading her to align herself with her pacifist and liberal father as the threats of nuclear war escalate into the Cuban Missile Crisis. Ginger and Rosa begin to have differing awakenings during their teenage years, such as how to deal with the looming threat, and even an interest in how they individually fit in Roland’s life.

Ginger & Rosa is set predominately through Ginger’s perspective, but the first act of the film has the inseparable girls experience their first cigarettes together, their first encounters with boys, and they even dress alike. Their teenage years take them in drastic directions, directions that are exemplified by their ideologies in dealing with the fears of nuclear war: “Protest,” says Ginger. “Pray,” says Rosa. Although Rosa does not exactly take a religious route in her life, but she is aware that certain things are beyond her control.

There is no shortage of close-ups of Ginger, her drama is indicative of a UK teenager just before the Beatles become huge, when Rock n’ Roll was in its primitive stage with Little Richard freshly imported from America, and Jazz is the go-to groves for a generation born  after the bomb. There are so many close-ups of Ginger, but she tends to peek-in on moments that are not hers. Her voyeurism reveals the moments that will eventually define her relationships, but also create the affirmation that she cannot always control the situations that concern her, they happen without her consent or her voice.

Ginger has the looks of her mother but the sentiments of her father. Elle Fanning and Christina Hendrix both sport vibrant red hair and fair skin. Natalie bears the feminine mystique that plagued many of the women who were relegated to thankless house work, and Natalie wishes for Ginger to have something better. However, Ginger does yearn for something better, to be poet. This romanticism and activist attitude comes from Roland who is a lecturer, an atheist, and a pacifist. He was a conscientious objector in World War II which landed him in jail, a fact he tends to use as a crutch through most of the film.

Fanning, whose pedestrian work in Super 8 and We Bought a Zoo will be overshadowed by her immaculate performance in Ginger & Rosa. She depicts a young girl concerned that her world could end at any moment by events that she cannot control. Indeed, her world does end when her social and familial spheres collude. It was not a flash before her eyes that propaganda had explained, but a drawn out affair that she saw coming through a peep hole. Ginger’s anxieties and fears about nuclear war are not too far off from the current threats we face today. The past several weeks have seen several threats from North Korea towards the United States and its allies. The difference between Ginger’s fears and current events is that the conflict between Soviet Union and the U.S. were mitigated by the concept of mutually assured destruction. In Ginger & Rosa mutual destruction is indeed assured without her intervention.

Ginger & Rosa might be Director Sally Potter’s most personal film and a quasi-autobiographical to boot. The end credits show a dedication to Potter’s mother, and Potter herself is a ginger who lived through the same political tensions portrayed in the film. Ginger eventually takes a different path than her pacifist father, she believes in intervention, and she acts on it. Not just attending protests about the nuclear war, but she confronts her family when nuclear bomb erupts over her own personal affairs. Ginger & Rosa is an affectionate coming-of-age story that is complex as it is progressive, told with a masterful visual presence from the filmmakers and talents.