Home Movie Reviews GLOW: The Story of the Gorgeous Ladies of Wrestling 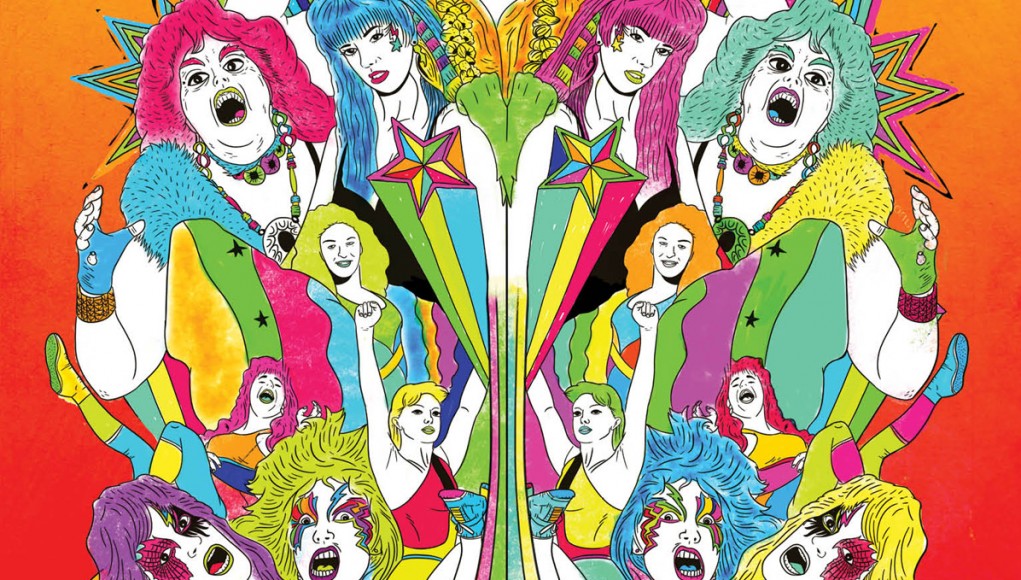 Unlike suffrage or reproductive rights, women were not exactly exhibiting a battle-cry over inclusion in professional wrestling. During the mid-1980s and into the 90s, the Gorgeous Ladies of Wrestling or GLOW, was one man’s dream and a beloved sorority for dozens of women who became positive icons for millions of viewers. GLOW: The Story of the Gorgeous Ladies of Wrestling compressively explores an unapologetically camp television series where women ruled the ring.

As far back as the late 1950s, the French philosopher Roland Barthes explained that professional wrestling was not inherently a sport but a spectacle of excess, deliberately meant to be fake for entertainment purposes. Vince McMahon, the patriarch of World Wrestling Entertainment, has been well aware of this ideal, and the industry would make its money not on the fairness of a great match between comparable competitors, but that of performers with operatic storylines. Between 1986 and 1990, dozens of women auditioned for a role they had no experience in, but athleticism was not a requirement or a priority. No matter, when hired they were enrolled in a professional wrestling boot camp where they learned the tricks of the trade and were bequeathed their characters’ personality. Complete with cheesy rap songs, skits with canned laughter, and the occasional match, GLOW became a hit with millions of viewers of children and college students.

GLOW is told through the eyes of the women and few men who ran and performed in this barebones television show that lasted over 104 episodes. The women interviewed look back in reflection in a time where their future was uncertain, but thoroughly enjoyed their role in GLOW. Reminiscing about their favorite moments, the creation of their characters, even the mishaps in the ring, these wrestlers primarily had fond memories of a time when something as contrived and excessive such as GLOW was just shy of a cultural phenomenon.

Unlike the later women’s leagues that were bolstered by sexuality, GLOW was not exploitative, these women reveled in it. Sure the costumes were tight, but the women wore them proudly without lascivious intentions, even towards their college-age admirers. They were also aware of their role as millions of their fans were easily influenced children, thus they were sure to provide a fair amount of public service announcements about drug abuse and other relevant issues.

Although women’s wrestling did exist before and after GLOW, the film overlooked a pinnacle moment in women’s wrestling in which the camp nature of GLOW is indebted to: Andy Kaufman’s foray into wrestling. Kaufman made many sexist comments about women and even self-proclaimed himself as the Inter-Gender Wrestling Champion. As we know, this was a hoax and an incredibly dry form of performance art that would reinforce Kaufman’s star status, even if it was infamy. This oversight does not delegitimize the film, but it is a missed opportunity to synthesize the obvious: the moment when women’s wrestling and camp may have first intertwined in pop culture.

The documentary eventually captures a GLOW reunion where most of the participants reconvene with cherished memories. Some of the women are in poor health or have reduced physical mobility from their years in the ring, but none of them show an inkling of regret. While wrestling was the foundational aspect in these women’s lives, the campy skits, dated rap songs, and overall comradery were what these women remember most. Barthes’ cultural criticism is solidified by GLOW as it clearly defines the aspects that made the television series a popular show that was nixed at the height of its glory, and GLOW the documentary capsulizes the history with aplomb.