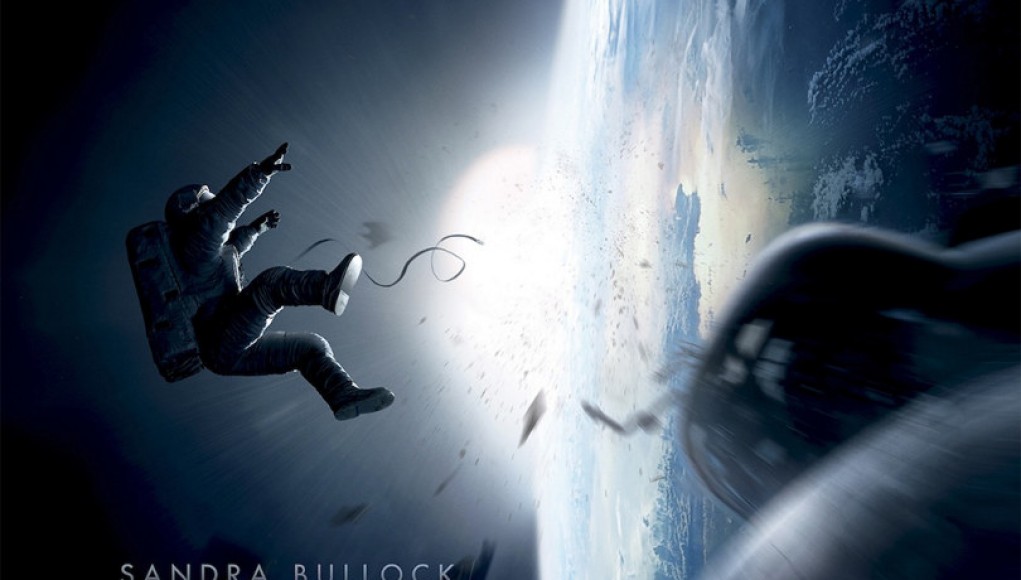 The progress of humanity in space always moves forward, but tragedy often takes us another step back. Gravity expresses the balance of beauty and treachery of space; the possibilities are still infinite, if not beyond our comprehension. Like space, the film is constantly awe inspiring, even in the captivating suspense where mere seconds are the difference between tragedy and survival.

Ryan Stone (Sandra Bullock) is on her first moonwalk to service the Hubble Space Telescope while veteran Matt Kowalski (George Clooney) supervises on his last space flight. When debris from a Russian missile test causes unanticipated destruction of nearby satellites, the debris takes orbit and is hurls itself toward the crew and by the space shuttle. Unable to safely reach the shuttle in time, debris damages the structure that Stone was tethered to, launching her into space uncontrollably.

Kowalski is a cocky veteran of space exploration, and is set on securing the record for the longest spacewalk. He supervises his crew and offers anecdotal stories as the mission proceeds. One story is about his time at Mardi Gras in the 1980s, and his mission to find his friend’s sister. The story is interrupted half-way through as the threat of oncoming space debris. However, that mission to find a person in a strange place is replanted in the present as he and Stone must survive the unthinkable.

In one scene, Bullock’s character floats into the fetal position, a comforting position of survival for humans as it retains heat and protects more vital organs. It is a thin reference to 2001’s Starchild, but also metaphor for the frailty of the human race. This position also denotes the natural appearance of the spiral, a universal form that exists everywhere, on earth and in space. Because the spiral links our humanity to our place in the universe, it reminds us how isolated our race is, while still innately forced to comply with universal physics.

The film is mostly comprised of long takes, and the editing is so smooth that cuts feel like these cuts never happened at all. While the beauty of space is the central aspect of the film, the decision to use audio and music at the appropriate times helps the film reach a transcendence that few science fiction films can attest to current cinema.

Director Alfonso Cuarón’s career, particularly in the past decade or so, has been rather eclectic. He helmed arguably the best Harry Potter incarnation, and Children of Men was one of the most impressive hard science fiction films of the Oughts. With Gravity, he returns to hard science fiction focusing solely on survival after a catastrophic chain of events.

Unlike any other science fiction film about space before it, Gravity is one of the first films to portray the role of space junk. With hundreds of satellites now orbiting our planet, several space stations, and space tourism coming in the near future, even the space outside our atmosphere is becoming overpopulated. With all the atrocities portrayed in the film, it begins to focus on one person moving from one catastrophe to the next, whose inexperience is endearing as their constant struggle to survive.