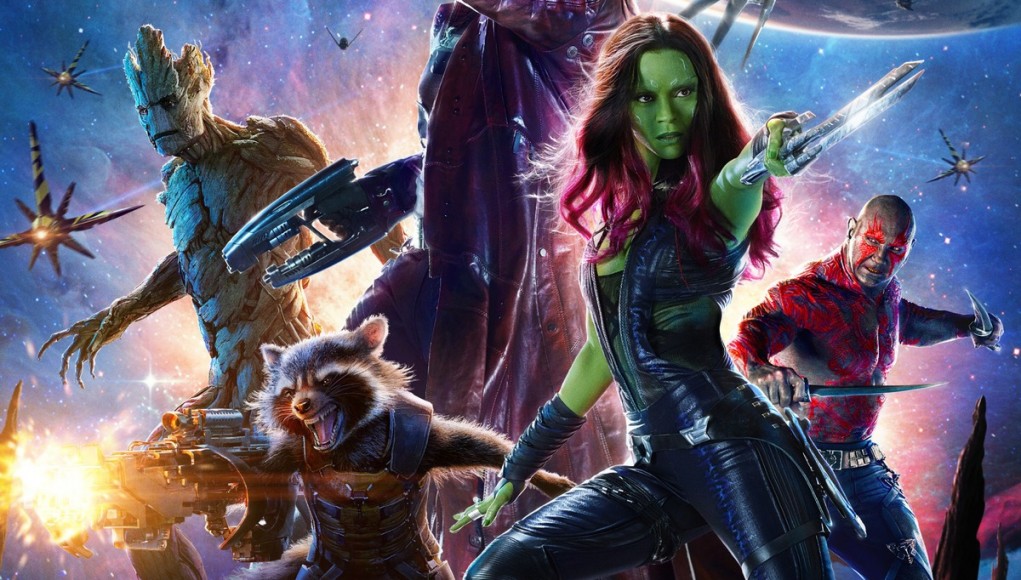 Guardians of the Galaxy is among the many lesser-known Marvel properties and now it too has its own film adaptation. Since the series exists somewhat outside the Avengers and Spider-man franchises, this new world offers a fresh canvas compared to the tired superhero action genre, but the tricks and wonder are all the same. Exhibiting an unabashed sense of humor beyond structurally imperative comedic-relief, Guardians features the same cosmic rough-and-tumble as the X-Men and Iron Man action that becomes difficult to follow.

Not long after Peter Quill’s (Chris Pratt) mother dies, space pirates snatch him away from his despair and the earth altogether. Over twenty years later, Peter, who refers to himself as Star Lord, is tasked with stealing an orb, but Korath, a minion of Ronan the Accuser (Lee Pace), is also sent to steal the same orb. After Peter successfully outsmarts Korath, Ronan sends his adopted daughter Gamora (Zoe Saldana) after Peter, who finally arrives back to Xandar to deliver the orb to a broker. Just as Gamora is ready to ambush him, Rocket (Bradley Cooper), a genetically engineered raccoon, and Groot (Vin Diesel), a tree-like being,  also join the fight to retrieve the orb. The four are captured and imprisoned, and Gamora explains that she is no longer under Ronan’s subservience and has another buyer in mind for the orb instead. Fellow prisoner Drax (Dave Bautista) also has a persona vendetta against Ronan, and the five escape from prison to deliver the orb and obtain untold riches.

Peter’s most prized possession is his Walkman, which houses a mixed tape of his mother’s favorite songs, mostly 1970’s era, semi-forgotten pop hits with funky bass-lines. This cassette tape functions as the film’s soundtrack and the last tangible memory of his mother. Unlike the infinite amount of music that iPods and mobile devices can hold, the finite nature of the cassette tape is the only reliable aspect for Peter in this infinite cosmos filled with betrayal and unstoppable forces.

Guardians is among Marvel’s more zany superhero titles, and the sheer humor in the film matches that sentiment. The film features equal parts comedy and action, but neither is all that impressive. Like any space-themed action film, the amount of planets, locations, and haplessly named characters makes the film convoluted as any fantasy science-fiction flick. Despite this intricate nature, the film’s humorous side and light-hearted tone is refreshing after the ho-hum Spider-man reboot and the over-inflated Avengers series of films.

Chris Pratt, America’s newly minted goof-ball from Parks and Recreation, fits the bill as Peter/Star Lord with his machismo confidence and Walkman-powered dance sequences. The could-have- seen-it-from-light-years away love interest of Gamora played by Saldana is adequate and text-book at best. Bradley Cooper’s Rocket has a rapturous hilarity, exhibiting a cross between a Napoleon complex and “why me” angst. He makes the perfect Abbott and Costello team with Groot, a tall, gentle giant tree-folk whose “I am Groot” harkens to Pootie Tang’s contextual slang, where it’s not what he says that has meaning, but the context in which he says it where one can derive meaning. Lastly, Lee Pace’s Ronan is quite the change from his hopeless romantic role in Pushing Daisies but much more villainous than his new role in Halt and Catch Fire.

Marvel’s dominant industrial convergence in the last several years has conquered American and overseas cinemas, and anything under the imprint is apparently fair game for adaptation. Guardians places a brief pause on the household names of Iron Man, Spider-man, Captain America, et al., but the result is the same: an over-stuffed narrative and flash. Each sequence and scene whiz by so quickly that the events appear meaningless. That’s because films like Guardians of the Galaxy do not rely on sense or spacial awareness, just wonder and awe.