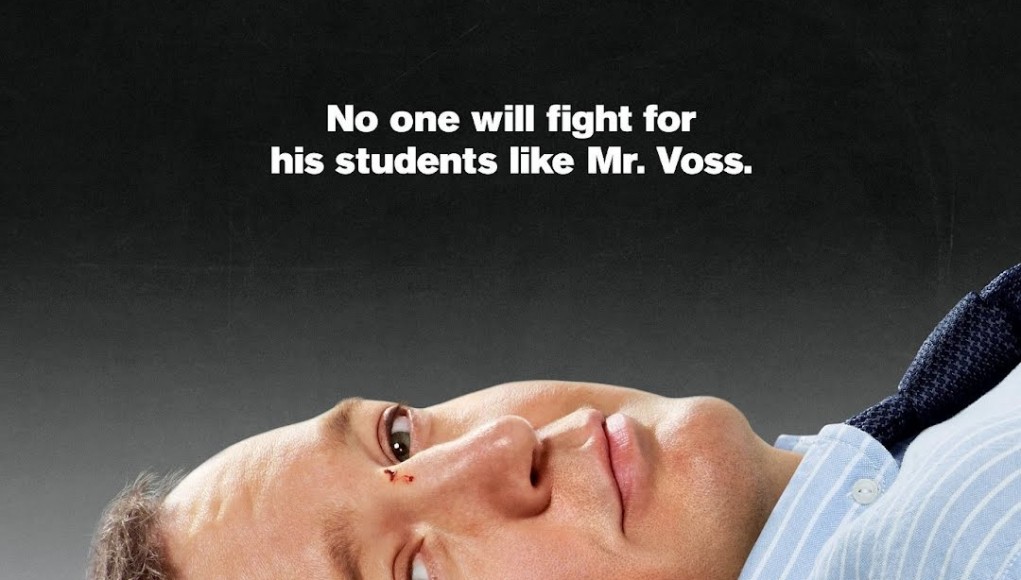 Boxing is as American as apple pie, and so are budget cuts in public schools. Here Comes the Boom portrays a lethargic teacher’s literal fight for the sake of keeping an essential music department at his high school. With a surprisingly humorous, feel-good, rock ‘em sock ‘em twist on the underdog boxing movie, we follow a teacher’s meteoric rise through underground MMA fighting ranks.

After receiving the Teacher of the Year award early in his career, ten years later, Scott Voss (Kevin James) has shown a disinterest in instructing students with the same rigor and passion he once had, and the school administration knows it. When school funds run short, it is suggested that the music department will be closed, and effectively laying off the music teacher Marty (Henry Winkler), whose wife is now expecting. Scott vows to help cover the $48,000 short fall to keep Marty’s job and begins to teach a citizenship class. When one of his students, a former mixed martial arts (MMA) fighter, he finds a new way to earn the money.

Scott finally begins to embrace his old teaching style, relaying his passion to his pupils. He stands on his desk and even begins to stand and walk on his own students’ desks to command their attention. This is an iconic reversal of Dead Poets Society, where students stood on their own desks as a statement and rebellion against the school at large. Here, Scott is rebelling against mediocrity, it is just a shame that he finally returns to this teaching method only after many rounds of beatings and the threat of his peer losing his job.

Every year there is a minimum of one boxing related film; it is an assured American event, usually released in time for the fall and ready for home video release by the holidays. However, there have been films that tend to slightly divert from boxing, but maintain the same expected structure (Real Steel, The Wrestler). It is a film category that typical places an underdog against the best, often uniting a lone man with a community and perhaps a love interest. Here Comes the Boom tends to enjoy the same progression as most of these films, and even takes lovingly from Rocky.

MMA is a brutal sport with blood, broken bones, unchecked aggression, and has given both boxing and “professional” wrestling a run for its money in the past decade. In a real MMA fight, dry blood has almost always stained the mat from previous fights. Yet, Here Comes the Boom happens to show much more tamed consequences, of course to obtain a mild PG rating, allowing families to enjoy a film that licenses brutality in the name of education.

Here Comes the Boom lands about a year after Wisconsin teachers lost their collective bargaining rights, and within an ear-shot of the recent Chicago teachers strike. The film portrays the common reaction during budget cuts: target music and the humanities. Yet, art and humanities education supports core classes, providing students with a canvas to see how math, sciences, social studies, and the language arts can be applied elsewhere.

There have been several fictional and non-fiction depictions of the shortfalls in American public school systems in recent years, as well as within the past several months. But the thematic attention is rather broad. Wont’ Back Down, also out in theaters, also portrays an collaborative effort to make systematic changes. The Lottery and Detachment expose an indifference in both teachers and students, often times broken down by a greater system. Here Comes the Boom, while certainly championing passionate instruction, considers the monetary pressures that are almost always passed down onto the shoulders of the students and teachers.

What separates the film from other boxing films or the like is that is satisfyingly humorous, and does not tend to rely on scatological or predictable gags. Instead, the film melds both charm, inspiration and passion. However, there really could have been a really beautiful film here. Scott adores Marty’s musical instruction and dedication to his students, even if Scott seems to have lost it for his biology classes. MMA fighting itself is like a composition; it requires pace, rhythm, and improvisation. Consistent practice and precise instruction can allow for beautiful concert, whether is a concert of music or a concert of martial arts.

Budget cuts are as inevitable as taxes and death, especially in troubling times. Cuts in education and other public services tend to be the most heart breaking. Public service workers, teachers, police officers, and firefights are the backbone to our communities. With the right equipment and communal support, they tend to be invincible. Without livable wages and the support, they are the first to be marginalized. States and school districts focus more on testing and sacrificing the extracurricular activities.

General audiences will find Here Comes the Boom to be a lovely event. It is unfortunate how the humility of saving music education is over-shadowed by the brutality of cheering on a teacher’s MMA fighting side gig. Then again, the underdog story is what families want, and it is what they get. A few scenes have some lovingly physical gags that are not pushed too far or even all that predictable. In the end, the film fills the void for what it is attempting to do; it is entertaining, heart-felt, and passionate.