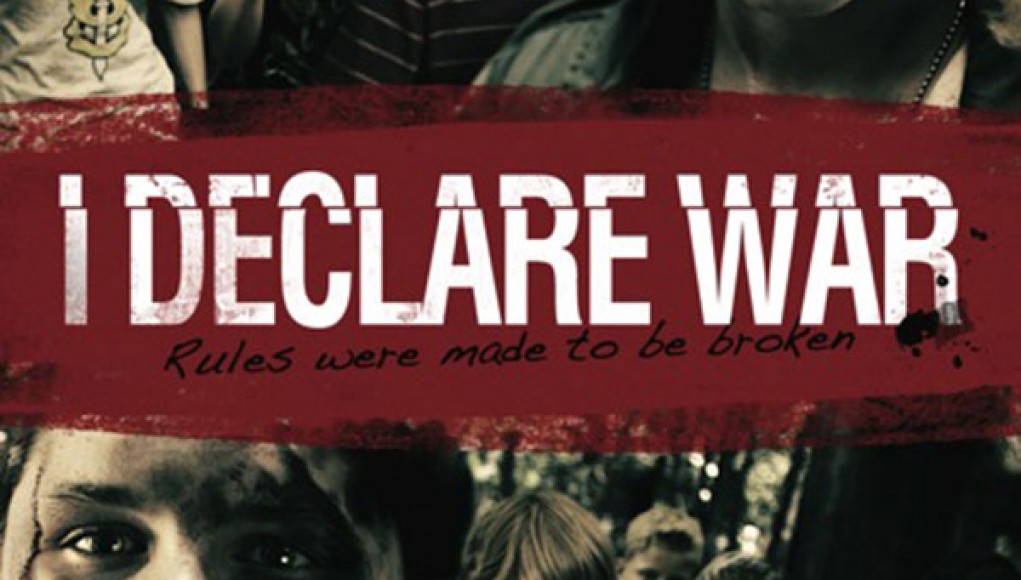 War is not a game, unless of course the right filmmaker shapes it into a toy. Stanley Kubrick among several others have satirized the absurdity of war to no end, but I Declare War allows us to see war through the eyes of pre-teens who are serious about their regular game of capture the flag with a series of strict but simple rules. The film captures contemporary issues of war and politics using children as an allegory for real war-time politics and perhaps to give light to these topics with the seriousness it deserves.

Over half a dozen pre-teens have split-up into a game of capture the flag in the forest, where they use their imagination to turn their makeshift toys into weapons that fire and kill. The rules are simple: If you are shot, you must count to 10 before getting back into the game, and if you are hit by a grenade filled with red coloring, you are dead and must go home. The first team to capture a flag from an unmovable base wins. Surprisingly, the game is played rather fair; children abide when they are shot or killed. Of course, none of the children are really harmed until some kids get a little emotional and over-the-top.

While the rules are simple, everything else seems like a grey area. This includes taking an opposing team member hostage, the use of drones, and even torture. This familiar sounding set of motifs allows I Declare War to offer a glimpse into the absurdity of contemporary war by exploring how serious these children are when it comes to winning the game. PK (Gage Munroe), the leader of one particular team, has studied war history, is quite the Patton fan, and his team remains undefeated. The opposing team leader Quinn (Aidan Gouveia) has a new toy ready to deliver an exciting blow with a RC-controlled plane that can drop a grenade. These grey areas are where the curtains of disbelief are rolled back to reveal children who have taken a game—played seriously—to a different level.

The children come together to play the game not only for some friendly competition—even if the competition has some unfriendly adult language—but also for socialization. The question of friendship between the characters is an important theme that both brings together and divides the children. They become jealous, shy, and even romantically unsure. Jess (Mackenzie Munro) is the only female in the war. She announces that she really only plays chess, but her choice to play on this certain day is not for friendship like the others but for love. She shows an attraction towards Quinn early on until she uses her budding femininity to distract all the players.

Quinn’s team undergoes one of the largest transformations; there is a mutiny among the ranks and Quinn is taken out the game. Skinner takes over and begins a ruthless reign, first with physical violence and with the aforementioned torture. For much of the film, it is difficult to see which side is the protagonist in the eyes of the audience. Some wars just seem ludicrous to begin with; but this is not war, it is supposed to be some children playing in the nearby forest before they are called in for dinner.

I Declare War is a hilarious and relentless satire where children ironically shout obscenities and vulgarities, modeling their behavior after influential films. Along with Patton, there are hints of 1980s action flicks where epic handshakes allow characters to bond prior to battle and even a moment where watches must be synchronized. Along with seminal action and war films, I Declare War takes cues from The Hunger Games, Battle Royale, Lord of the Flies, and Son of Rambo for a familiar but comical take on these genres and tropes.

The film uses the common narrative where children struggle with adult issues regardless of their attempt to replicate them. All of the characters’ motivations are laid bare and the talent’s performances deliver the relentless satire required to drive the film’s premise. Constantly humorous and exceptionally adorable, I Declare War depicts the tropes of action and war films with a superior execution than most contemporary and serious efforts.