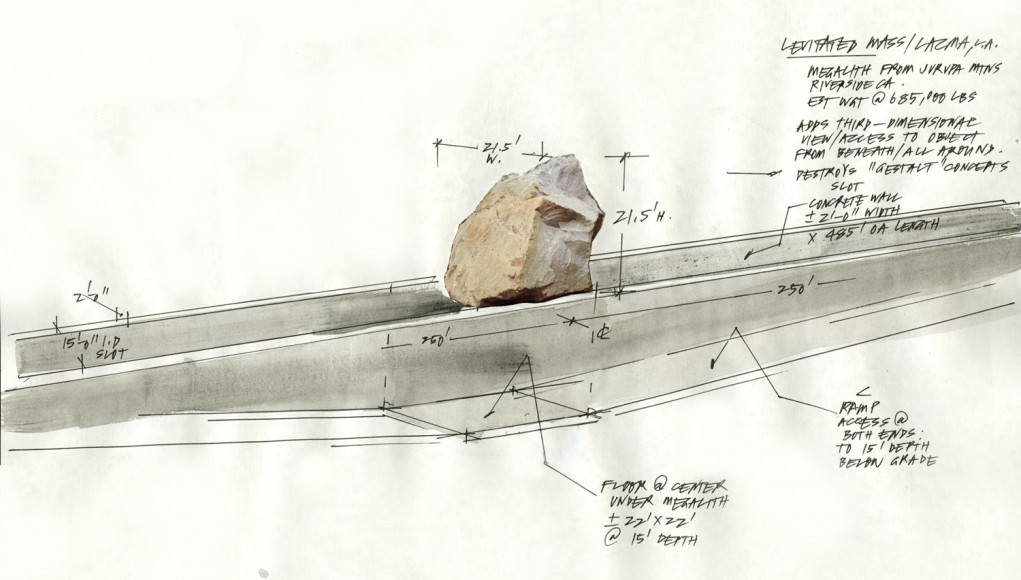 The art installation “Levitated Mass” is not about whether it is or is not art, or even about the artist’s intent. It is about the public and private sectors supporting a monument that defines a civilization and can deliver an abstract idea of that civilization thousands of years after its creation, like the Pyramids of Giza, the Sphinx, or Stonehenge. Perhaps long after the usefulness of the structure has passed. The documentary Levitated Mass chronicles the career of Michael Heizer and the judicious process to move a 340 ton boulder from a quarry 60 miles west of Los Angeles to the center of the Los Angeles County Museum of Art to be enshrined forever.

Artist and sculptor Michael Heizer is only given a few minutes in the beginning of Levitated Mass, all shown in archive footage and photographs. Heizer developed an interest in negative sculptures, or objects that pierce through the ground or distort our understanding of where art can go rather than our natural conventional spaces. Hezier originally conceived of Levitated Mass in the late 1960s, and an early version is actually on display in New York City. This initial version is a large rock that sits on hidden supports with water rushing past it to create the illusion that the rock is floating.

However, Heizer had a grander idea for Levitated Mass; to find a giant rock and have it wedged between two walls of an artificial valley, with hopes that a person could stand underneath the rock and look up to see an illusion of a giant boulder appear as if it was hovering above them. Heizer had found the perfect specimen in the late-1960s, but the construction equipment at the time could not move the rock, and the project was scrapped.

The first third of the film chronicles the delays and frustration of getting six counties to understand the scope of the project and obtain all the necessary permits. The second third shows the actual transportation of the rock, where traffic is stopped, trees cut down, power lines lifted just a few inches, and even traffic lights are temporarily moved to appease the transportation of the rock. The last third is about the planning on the rock’s final resting place, which requires more county code approval.

Levitated Mass the art installation and Levitated Mass the documentary are not solely about explaining or defining the meaning of the rock and its resting place. Both the installation and documentary are really about the artistry of the purpose-built construction equipment and transportation methods move  a 900 million year old rock merely 60 miles in ten days. Civilizations 3,000 years ago used to do this sort of thing, but we can only use our best guesses to how it was done, as we are only left with the final product.

“Levitated Mass” will not suffer this mystery, as the documentary shows spectators in awe of the rock as it passes through their towns at 7 miles per hour. Spectators propose marriage in front of it, skip school, take pictures, and some even have their own government conspiracies regarding the transportation of the megalith. Not all communities are welcoming of the rock; some of the more economically depressed neighborhoods see the $10 million project as a wasteful expense asserting that the money could be used for social good.

Levitated Mass is a transformative documentary that questions the role of art, even if installation itself has no tangible purpose to the public. Yet, emotions are clearly present throughout the film, before, during, and after the rock reaches its final destination. The film is told solely through the eyes of those who are closest to the project, and lacks a voice of God-style narration. We may never truly know some of the world’s wonders were constructed. While we do have documentation as how Levitated Mass was transported and constructed, we will still be left questioning the artist’s intent, although we can make inferences based on Hezier’s previous works.