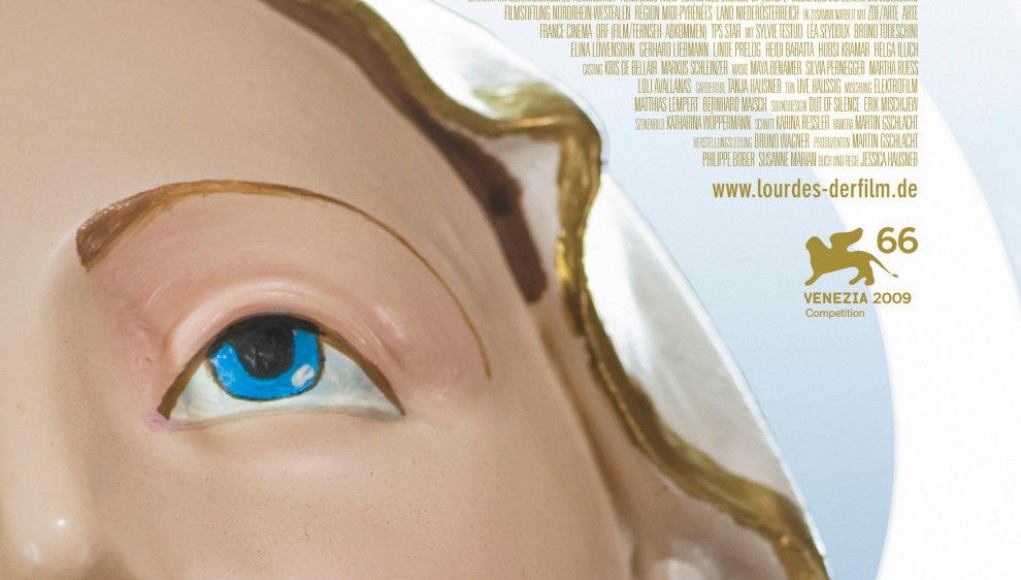 Imagine being confined to a wheel-chair and pushed around Lourdes, France, undertaking a pilgrimage in hopes that the healing powers of the region’s famed water could reverse such afflictions. Lourdes tells the tale of a woman whose hopes had all but passed. Yet, she still keeps her chin up and makes the best of her pilgrimage, even if its for the worst. This 2009 French-language Austrian film directed by Jessice Hausner explores the polar oppositions that exists within religious myths.

Christine (Sylvie Testud) is wheel-chair bound due to multiple sclerosis. To compensate for her loneliness she joins a pilgrimage visiting the historic sites in Lourdes with other differently-abled people. She is given baths with the holy water, visits the Statue of Our Lady of Lourdes, and develops a slight crush on a male officer, who has more interest in the caregiver that assists Christine. No matter how much she tries to fit in, she is always isolated from others, and her pilgrimage has gone, at first, relatively un-noticed.

Lourdes moves slow, so much that you can make your grocery list in your head during the film. There is only minimal dialogue, just enough for the twists to have specific meaning. The camera work is often distant, the perfect distance between the content and the audience, allowing for spectators to make their own interpretation of the events in the film. The film never calls for direct urgency, instead director Jessica Hausner has created a film that relies on the mise-en-scene to deliver the most telling moments. It is what makes this film stand out.

The ending is superb. It wraps up the film, ties its knots together perfectly, and leaves the spectators questioning. The questions are not whether the film’s content is ambiguous or not, it questions the validity of miracles. Foreshadowing between gossiping pilgrims early in the film reveal past experiences (merely rumors perhaps?). I’m not here point out essential moments missed by the casual viewer, primarily because the foreshadowing happens twice and is pretty obvious, but the foreshadowing feeds into the mythic proportions of such pilgrimage. What is a miracle? How do we measure it? Should it be left up to religion to make such determinations? The validity of miracles is lost on me, but I recognize and adore the puzzle that Lourdes establishes.

There seems to be a systems of checks and balances in the world that is depicted in Lourdes. How could something so miraculous be balanced out with events that are catastrophic to others. Essential moments in these pilgrims lives are taken from them faster than they received them. Are miracles just a tease? Are the stories and events that predict the foreshadowed events truly the myth of the region? Has Christine, who ends the film in the same state as she began, come full circle and successfully completed her pilgrimage? It is questions like these that leaves the transcendent ideas in the film open to interpretation, but not the film itself.

Sylvie Testud performs her role with the grace that is transcendent in itself. Her facial expressions say more than any of the dialogue could. Christine may forever be isolated, a castaway even among those of similar physical differences. Lourdes explores many things, but the competitive nature in religion is one of the most fascinating aspects of the film, and it is explored perfectly. There is a lovely element of black humor here, and the religious content in the film is non-denominational, those of all beliefs could find this film to fulfilling in the questions that are posed.