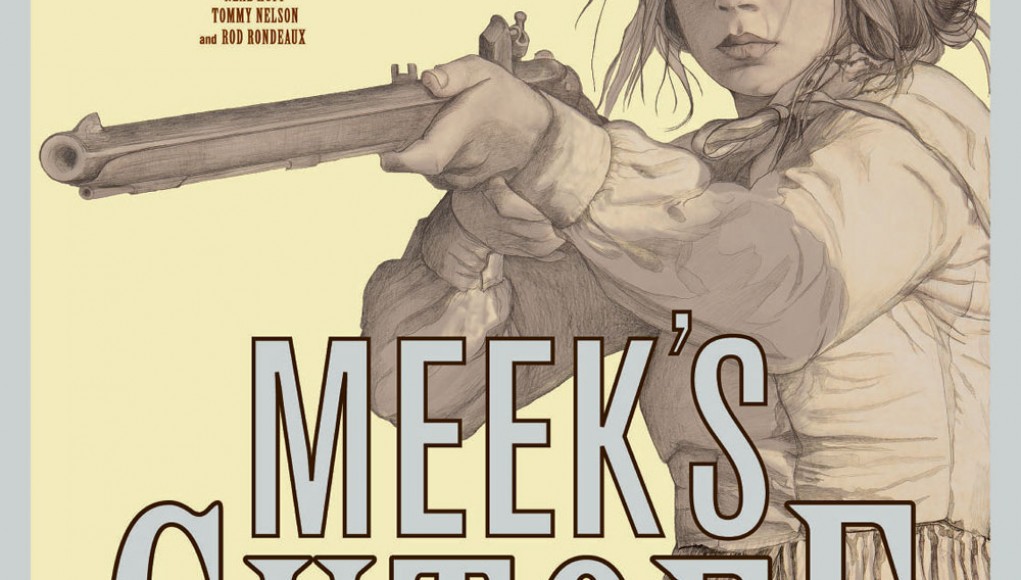 Minimalism has not been the American film industry’s best suit, but for Meek’s Cutoff it is fitting and appropriate. This independent film offers an experience that is rarely achieved in American cinema, and it is certainly a stark contrast to the bass-thumping, explosive popcorn pushers that have littered the theaters over the Summer. With an ensemble cast, a historical setting, and the treacherous journey across the Northwestern United States, director Kelly Reichardt created a rare experience that captures the anxieties of settling into the Western frontier.

Led by Stephen Meek (Bruce Greenwood), a group of settlers travel along the Oregon Trail. Meek diverts the group to a different route, and the group eventually gets lost. Food, water, and patience are running low, and the women of the group are left out of the the decision making. One of the settlers, Emily Tetherow (Michelle Williams), stumbles across a native who is later captured. The group is torn on whether to allow the native to lead them to safety or to execute him out of fear.

Meek’s Cutoff features a slow, contemplative cinematography that is commonly found in foreign releases. Not much appears to happen, but when something does happen, it’s an important plot point. The contemplative nature is important as it allows the intentions of the characters to patinae over the course of the film. The destruction of the the group’s morale and the disconnection in collective decision making fuels the suspense. The film clearly has revised the Western for modern audiences since rarely are Westerns this introspective and musing.

Meek’s Cutoff features gimmick-less surprises that might shock the typical spectator. The 4:3 aspect ratio is quite refreshing to see in an age where 16:9 is the flagship ratio of the high definition generation. The square shape of the frame offers an anomalous cinematic vision that rarely exists in modern cinema. It also represents the limits of intelligence that the Anglo-Saxon settlers exhibit, being how they instantly treat the captured native as a savage, despite the fact he obviously knows the land far better than they do. Where some Westerns rely on the widescreen ratio to capture the horizon, Reichardt shows the depth of the Western landscape, depth that further captures the endless landscape the characters must overcome. The most surprising aspect of the film is the ending. Without giving too much away, and after careful consideration, the ending is exceptionally appropriate. The closing scene provides the spectator with the exact payoff that the film hints at from the moments Emily began to care for the well-being of the native.

The minimalism in Meek’s Cutoff is appropriate as the settlers have to deal with much less than they are used to. We watch the group perform the most mundane tasks and the camera never cuts away from these tasks. From washing a bowl with as little as a rag and water to to fixing a broken axle on a wagon. We witness these back-breaking chores as if we had to wait for these tasks to be completed to continue on the road. The minimalism in the film is supported by the subtle acting from the ensemble cast. Williams portrays her character’s motive to reverse her initial ideals regarding the native and adds the feminist stance to drive the message home. Bruce Greenwood has hidden himself behind the bushy beard and the stubborn demeanor necessary to further provoke tensions within the group.

The film may appear boring thanks to the long takes, lack of dialogue, and seemingly endless journey. That is the point. The spectator is meant to share the pain of hunger, misery of malnutrition, seemingly endless boredom, and the anxieties of potential native American attacks. All these issues are laid bare to the spectator to join on the miserable experience of the settlers. Traveling across the great West was a risk and director Kelly Reichardt has placed the spectator in those boots. Meek’s Cutoff is a readerly text with an implied trajectory that may never safely land.