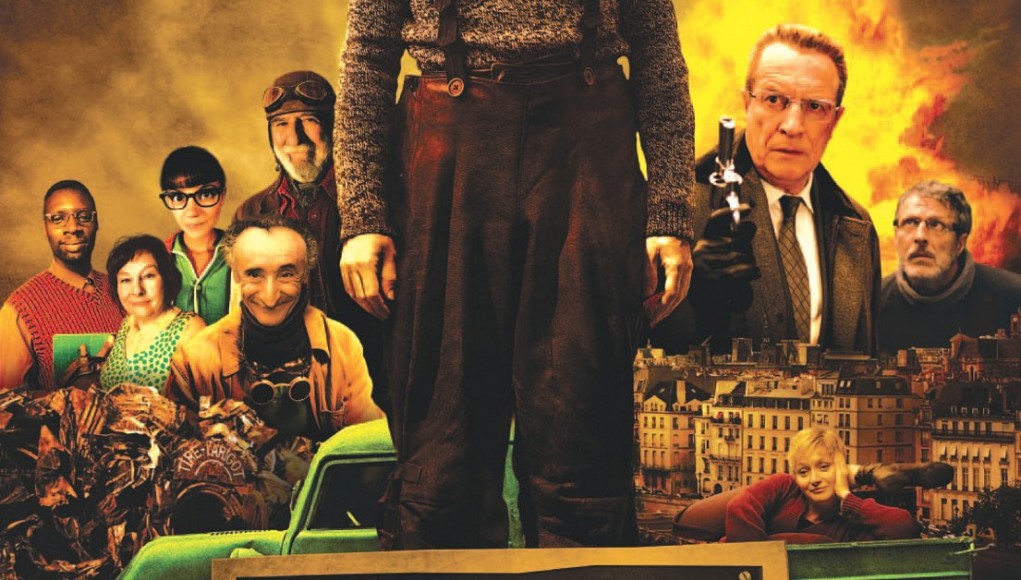 Micmacs never had a decent opening in America, a terrible note for such a great film. Jean-Pierre Jeunet has reclaimed his auteur style again in this gorgeous, fun, lovely satire. The film returns to Jeunet’s semi-steampunk worlds that he originally created with Delicatessen and Children of the Lost Children and merges it with the journey for love found in Amelie and A Very Long Engagement.

As a child, Bazil’s (Dany Boon) father was killed by a landmine. 30 years later, Bazil, while working at a video rental store is struck by a stray bullet which becomes lodged into his head, it was decided that it would be better if the bullet was left in. Bazil returns to the video store ready to reclaim his job, however he has been replaced. His replacement explains that she found the casing from the bullet that struck his head.

Bazil becomes a street performer to earn some money and is later adopted by a group of scavengers, all with their own unique talents. Armed with the talents of his new family, Bazil attempts to sabotage the arms manufacturer that created the landmine that killed his father and the manufacturer that created the bullet that is lodged in Bazil’s brain.

Jean-Pierre Jeunet has again created a film that is filled with wonderment and utilizes cartoonish elements as a style. The satirical nature of Micmacs is a first for Jeunet, but the idea never comes off as pushy. The film includes many anecdotes from film history. Not only is The Big Sleep included, but most clever action-based modern detective films and early silent film characterizations.

The group that adopts Bazil is similar to many of Jeunet’s films in that the protagonist has had to befriend new characters to assist in the progression of the plot. The idea of adoption runs in nearly all of Jeunet’s films, and the family of scavengers in Micmacs is by far the most welcoming and willing to assist in the protagonist’s journey. Much with all of Jeunet’s films, love is a central aspect. With Micmacs love takes the back burner but is still an element that Jeunet not only poses, but succeeds in portraying.

The soundtrack is mostly from The Big Sleep, the film that Bazil was watching prior to being struck in the head. The soundtrack is not stuck in Bazil’s head and in our own. But there is no better soundtrack to fuel the non-diegesis sound in Micmacs, and supports the lovely and wonderful moments found in the film. For Jeunet fans, one particular scene involves characters from his debut film playing the saw (Dominique Pinon) and cello in an apartment building, these characters made their first appearance in Delicatessen.

As a Jeunet fan the film is filled with elements found in his previous films, and it is rather difficult to write a review that does not touch upon those elements. I suppose one would love Micmacs even if they never saw the contemporary Frenchman’s oeuvre. It is certainly recommend to know his films to make Micmacs not just a great experience, but film that expands on Jeunet’s cinematic universe, and in doing so, expands Micmacs to the epicness that it deserves.