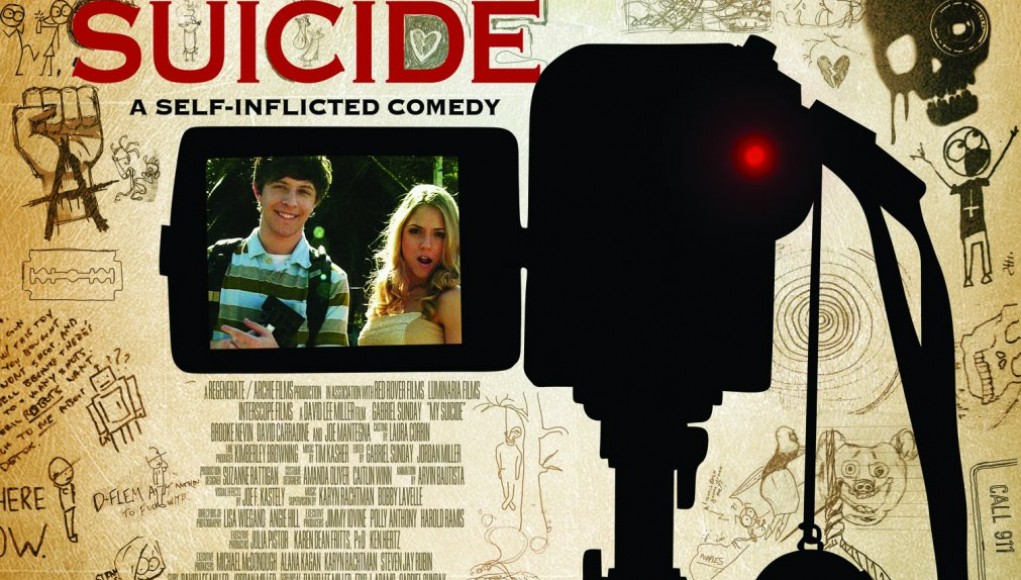 This review of My Suicide is apart of the CinemaFunk’s coverage of the Florida Film Festival.

Finally a teen dramedy that both teenagers and adults can and should watch. My Suicide is a rare gem that lingers in the festival circuit. Armed with a message and a compelling story the film has yet to be picked up for major distribution. My Suicide features a solid ensemble cast starring Gabriel Sunday, Tony Hale, Joe Mantegna, David Carradine, Nora Eloise Dunn, Venessa Lengies, and Brooke Nevin.

My Suicide examines and navigates the mindset and perception of teenager who contemplates suicide. Archie (Gabriel Sunday) is a socially inept high school student who announces that he will be filming his suicide attempt for his class video project. Outrage, confusions and cheering ignites students at the school increasing Archie’s popularity, enough to attract the attention of his crush, Sierra, who reveals that she has a secret to share.

Archie chooses to examine his decision and suffer the consequences of being detained by the police, questioned by his parents, lectured, psychoanalyzed, and drugged. His popularity with other students increases, attracting opinions from all sides of the school’s student population. Archie’s announcement attracts a Sierra and Earl, students with deeper and darker secrets hidden behind smiles and friendships.

It is this story arc that reveals the compelling accuracy of suicide among the youth, and it is the reason why this film succeeds so well. My Suicide explains that teenagers are far more vulnerable that what the media portrays, and director David Lee Miller, and lead actor and editor Gabriel Sunday have created a movie that matters.

The film examines Archie’s choice in choosing to commit suicide directing his voice directly to the viewer and breaking the fourth wall. A barrage of animation sequences assists his explanations, although the cliche reason of lack parental and female attention is tiring. However, this cliche has realism and makes Archie’s character so familiar to us. He’s your average stereotypical teenager who is confused, ignored, and frustrated, its easy for the viewer to take his side, despite the reason being so mundane.

The acting and performances are equally compelling. Beginning with Gabriel Sunday who offers superior performance that is sprinkled by dead-on imitations of actors and quotes from movies. Some of the more humorous gags feature cameos from Tony Hale and Joe Mantegna; while David Carradine offers oracle-like advice, yet his accidental death emboldens the lingering issue of death that surrounds this film. Archie’s female opposite, Sierra, played by Brooke Nevin, also offers a great performance for the screen.

One of the more stand-out discussions regarding My Suicide is the inclusion of David Carradine. Carradine’s accidental death in Summer 2009 was shocking, especially considering the circumstances of his death.

My Suicide appears to be navigating through the film festival circuit for quite some, and continues to add to an impressive list of festival awards, including Official Selection of South By Southwest and even receiving a blessing from the Pope. What makes this film stand out, is that it targets and directly speaks to today’s youth and delivers a chance for the audience to leave with their own interpretation of the message. My Suicidehas potential to reach millions of like-wise teenagers, but without major or even adequate distribution it may unfortunately fall by the wayside.

Please visit the official My Suicide website to learn more and check out the trailer below:

As of Fall 2011, My Suicide has been renamed Archie’s Final Project.