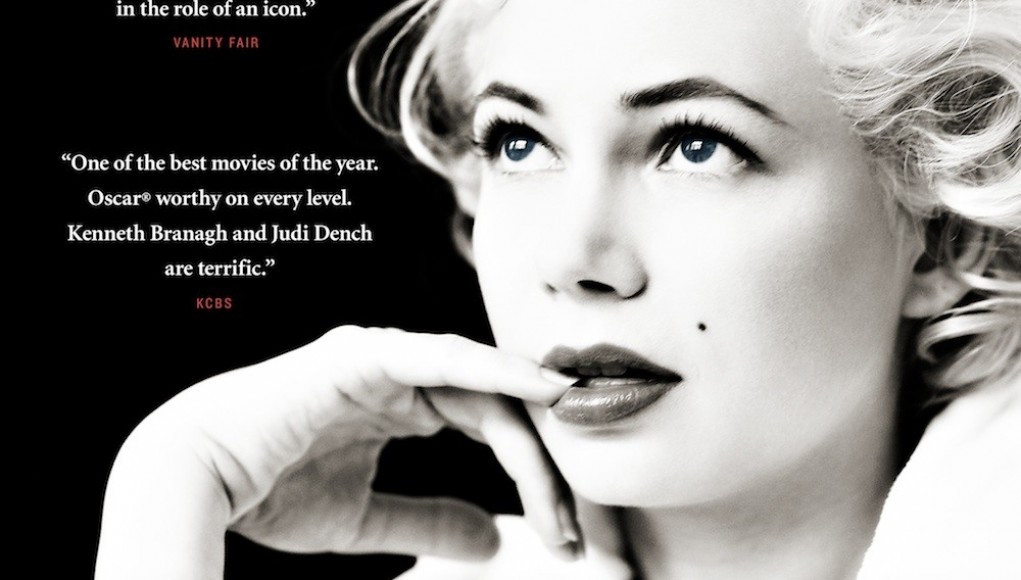 Biopics are a popular film genre because it allows the audience to revel in nostalgia while being indoctrinated with pop culture history. My Week with Marilyn is a biopic brings together a handful of the finest living talents for a self-reflexive story where art imitates life, and explore the turbulent relationship between the world’s most beautiful woman and the world’s most respected actor.

Colin Clark (Eddie Redmayne) enjoys a privileged life as the youngest son of English nobility but has more interest in pursuing a life in filmmaking than following in his family’s footsteps. After insisting a producer to give him a job to work for Laurence Olivier Productions he finds himself working under the man himself, Sir Laurence Olivier (Kenneth Branagh). Olivier has begun production as lead actor and director on The Prince and the Showgirl with Marilyn Monroe (Michelle Williams) as the female lead. Colin has begun a small romance with costume designer Lucy (Emma Watson), although Colin has found that Mrs. Monroe has taken to his charm and unconditional friendship.

My Week with Marilyn begins with an effective exposition presented at blistering speed before it slows down as the narrative truly begins. The film moves with a pixel perfect pace with information presented quickly when necessary and knows when let the scene settle and wade in the deep area, especially when Williams disappears into Marilyn. The film had a clarity and sense of color for the film to reflect the majestic atmosphere of the time period, the country of England, and even the unmeasurable beauty of Marilyn Monroe.

My Week with Marilyn is based off the published diaries of Colin Clark who would go on to work with Olivier several more times. The film is beyond a simple self-reflexive biopic. Olivier was the Prince and Monroe was the Showgirl, both of which were the perfect personalities for The Prince and the Showgirl. Today, Branaugh is the Prince, and Williams is the Showgirl, again the perfect talents for the roles. But the showgirl that everyone had worked her up to be is falling apart in their own hands. Marilyn has just been married to famous playwright Aurthur Miller and she is easily the most famous woman in the world, but yearns to be a great actress and not just a pretty face. Thus, Method acting coach Paula Strasberg (Zoë Wanamaker) has been hired to guide Monroe into finding the character that is beyond the page.

My Week with Marilyn is the beginning of the end for Monroe. During the production, Monroe is fed cocktails of pills in order for her to perform, sleep, and or eat at the will of producers from overseas in the States. Strasberg is suffocating the actress which in turn aggravates Olivier who comes from a more traditional and classic approach of acting and directing. When Monroe finds the charming demeanor of Colin, she sees the youth she barely had.

The score of the film moves along with the film precisely, and upon further investigation, of course it has. It was composed by Conrad Pope and Alexandre Desplat, both of which have extensive careers scoring many of the best contemporary films. Lest we forget that the performances are superior. Michelle Williams plays Monroe so well it is easy to forget that it was Williams all along. Williams got the high-pitched vernacular down so perfectly and keeps the whole thing going when she switches to an English accent. Kenneth Branagh also conjures up the spirit and dynamics that allowed Olivier to dominate his roles.

Nostalgia and star factors a side, My Week with Marilyn is a well-made film that knows how to entice the viewer into forgetting about the world beyond the screen. Director Simon Curtis and his crew created shots that were meaningful and dynamic, making use of the wide space the medium offered. All the filmic elements conspire to take this story to the heart of the spectator. The film is one of the best of the year and for good reason; it makes use of the period and the story to perpetuate the myth and legend of Monroe to more humanistic level, one where those who are not Monroe fans or those who have disregarded her place in film history.