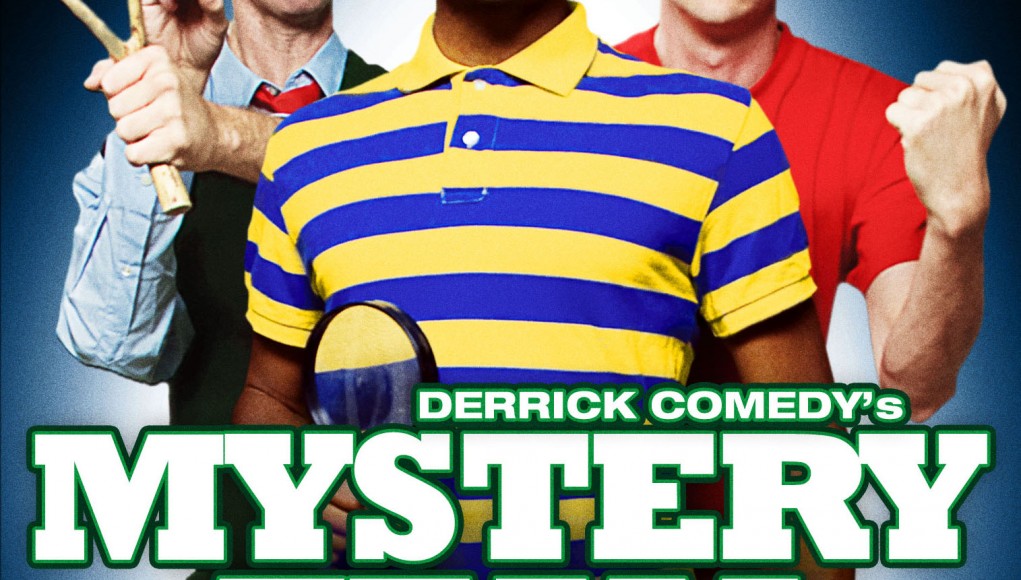 The acclaimed Derrick Comedy sketch team has reunited to write and produce Mystery Team, a campy throwback to childhood detective stories like The Hardy Boys with bizarre gags and adult humor. Seeing the three performers reunite after reaching the edge of mainstream success, Mystery Team is a satisfying comedy that has potential and momentum to become a cult hit on home video. After premiering at Sundance, followed by a very limited release, Mystery Teamcan now find its primary resting place on the shelves of loyal Derrick Comedy followers.

The Mystery Team is comprised of Jason (Donald Glover), the Master of Disguise, Duncan (DC Pierson), the Boy Genius, and Charlie (Dominic Dierkes) who claims to possess superhuman strength. The team has seen their share of stardom years earlier as child detectives solving petty crimes involving children much younger, and often much more crude then the Mystery Team. Now, just before graduating from high school, the naïve detectives struggle to be taken seriously. A new case dealing with a local murder arises, giving them a chance prove themselves once again. The Mystery Team rounds up their usual child suspects and the gang slowly dives into revealing a mystery and conspiracy that is far more adult than they could have ever imagined.

Derrick Comedy has produced an excellent mystery comedy that blends childlike wonder and gritty reality into a bizarre comedy that is easy to enjoy. The group knows exactly who their audience is, and in turn, developed the Mystery Team directly for that demographic without looking back. Performances by the main three are at first difficult to consume, but their antics and personas are supported throughout the film. Having Glover retain the role as the main protagonist gives the audience a strong character to follow, and who has plenty of growing up to do. The weakest character would certainly be Charlie, whose character rarely adds to the benefit of the team and whose dialog contains a fifty-fifty mixture of satisfying delivery of punchlines. Duncan’s character can easily be compared to Jon Heder’s Napoleon Dynamite, but often acts as the only voice of reason within the group.

The story structure of Mystery Team mixes plot twists that are either too convenient or supported solely by Derrick Comedy’s level of absurdity and gross-out humor, such as recovering a diamond ring from a heavily soiled toilet. However, the performances and offbeat humor smooths over many of the rougher bumps in the film, easing the viewer through the areas that do not work completely. The dialog is well-written, but delivered with right amount of enthusiasm to hit the punchlines adequately.

The ensemble cast of supporting talents include many performers taken from the NBC Universal cache of shows including Aubrey Plaza (Parks and Recreation) as Glover’s female opposite, and Ellie Kemper (The Office) who plays Jamie (and has appeared in Derrick Comedy videos), a female who shares the naïve, straight-laced arrested development as the Mystery Team.

Mystery Team shows a major turn in maturity for Derrick Comedy, thanks to the thoughtful direction of Dan Eckman, and you certainly cannot leave out the brilliant cinematography of Austin F. Schmidt. It is usually very odd for quirky comedies like these to have shots and sequences that grab my attention using cinematic devices usually reserved for more serious filmmaking. Schmidt and Eckman use long takes, Steadicam and rack-focus shots in order to allow the trio to truly perform their unique brand of rapport without the constraints of Hollywood formulas. Their first attempt at a full-length feature is far more accomplished than their legacy lets on.

For a comedy that deals with so many bizarre and quirky moments, the blocking and shots are far better than many would imagine for a film with such a low budget and low-brow humor. Any fan of the internet sketch comedy group should be fairly satisfied and impressed with Mystery Team, and any fan of quirky comedies in general should also appreciate this film’s naïve perspective of adult situations.

It is no secret that Mystery Team is directed toward a moderately sized and specific niche of loyal followers. The excellent replay value of this film will place it firmly on the shelves of many die-hard fans and those who appreciate this type of humor. Hopefully the momentum of this home video release will expand their following and perhaps even be enough to warrant more feature-length films from the Derrick Comedy.