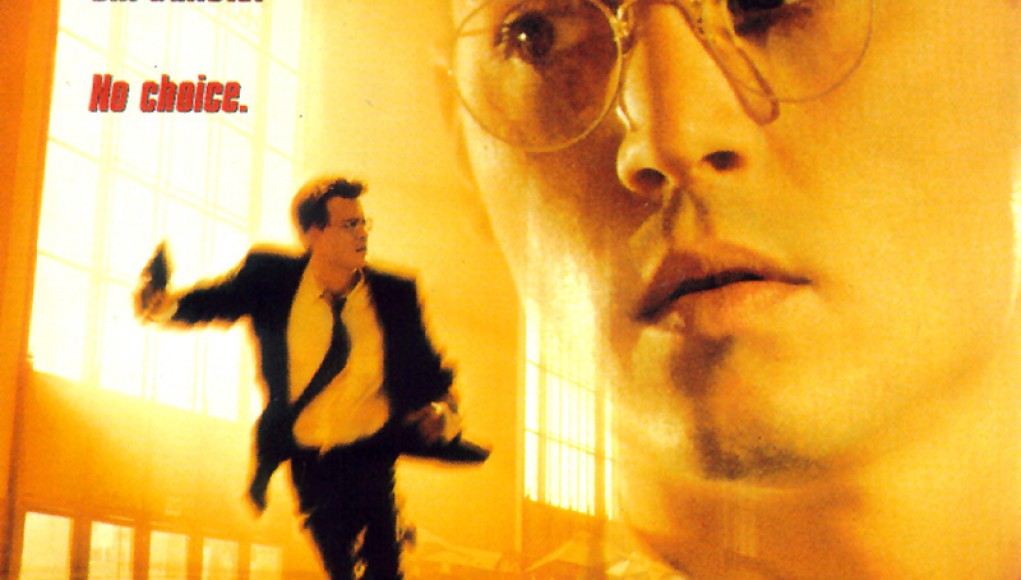 Years before Jack Bauer graced the television screen with 24, Nick of Time was one of the few films that dealt with the plot happening in real time (the only other one I can think of at this moment would be the French New Wave staple, Cléo from 5 to 7). This thriller has essentially been forgotten in time and 15 years later it still has a thrilling plot from beginning to end.

Gene Watson (Depp) and his daughter, Lynn, step off the train in Los Angeles to be immediately arrested by Smith (Walken) and his partner Jones (Roma Maffia). Smith gives Gene ninety minutes to kill the State Governor Eleanor Grant or Lynn would be killed. Gene tries unsuccessfully several times to ask for help from both citizens and authorities to quash the attempt, but Gene only finds that the corruption and conspiracy is far deeper than he could ever imagine.

Johnny Depp and Christopher Walken are paired for the first time and both complement each other’s characters. Depp’s youth is a prominent factor for those who are used to his Jack Sparrow, but his acting fits well with the character. Walken is as frightening and intense as he ever is, and his character is always behind Gene watching his every step.

Directed by John Badham of Saturday Night Fever, WarGames and Short Circuit, you can certainly tell that Badham has a deep understanding of the need for intense imagery and symbolism to keep the real time aspect going appropriately. The frantic style and constant reminder of time in general provokes the urgency in the film. Badham has mastered big-budget thrills with many of his previous films, however Nick of Time gives him a new challenge with the real time factored in.

We are constantly reminded in many forms that Gene Watson is being watched and that he is constantly watching the time. This constant need to keep track of time is where this film gains the momentum to keep the real time gimmick working. The editing and plot is tight, again to support the time and urgency factor.

There is a certain silliness within this film, the fact the film must end within ninety minutes constrains additional story to build a stronger plot. However the weakest factor in this film is the need for additional back-story between Gene and his daughter Lynn. Their few moments together in the beginning are essential, however I feel that there needed to be something else that kept their bond together beyond these few moments.

Nick of Timeends relatively satisfactory, but with a little help of some film noir, the higher antagonistic power within the film, essentially is able to escape. For a film that clearly hints toward murder, no one dies.

This wonderful experiment in real time essentially works because of Badham’s experience in thrillers where the the innocent are launched into conspiracies and schemes from governmental powers. Nick of Time is a film that you can always go back to for an easy hour and half of entertainment, to a time prior to 3D cinema and over-blown CGI effects. Re-screening this film every few years should be essential for straight thriller fans.