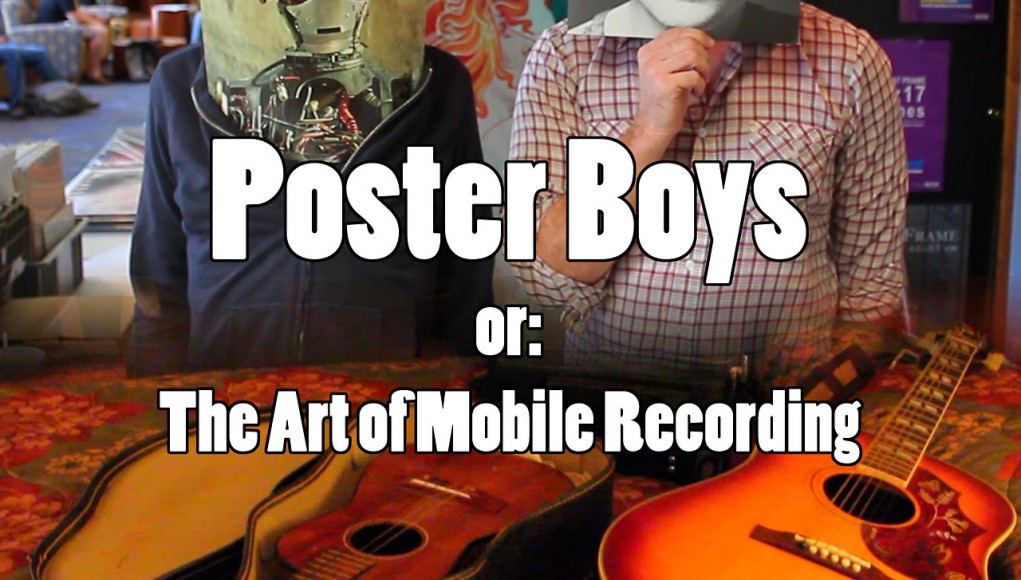 Athens, GA band King of Prussia gained a modest but dutiful following and critical acclaim in niche circles, but band members Brandon Hanick and Nathan Troutman have a side project to be completed on the road. They have joined a traveling college poster tour that foots the bill for their travel, lodging, and gas, and any time where the two are not setting up, tearing down, or driving, they are in their hotel room writing and recording their DIY album using equipment that fits in a carry-on suitcase.

Poster Boys or: The Art of Mobile Recording is a stark contrast to the nostalgia and historical precedence found in the recent Sound City documentary. Prior to their poster tour, Brandon and Nathan discuss their disenchantment with struggling with King of Prussia and the stress that surrounds a typical nine to five job. However, as the film progress, it becomes clear that the two have traded the stress and repetition of traditional employment with the stress of constant travel and hocking repetitious posters to the stereotypical students who buy them. Budgets and sale projections are held over their head with the same pressures for productivity that they would experience whether they were in a cubicle or in rental truck.

When not stressing over sales projections and their next destination, the two hide away in their hotel rooms finding inspiration for their next song. All the equipment they need has been packed in a small suitcase, a testament to the possibilities of music production in this age. They jerry-rig their equipment together and capture everything in just a few takes, choosing to create an organic feel rather than polished final product. They run into strangers who share a passion for music, offering a chance to collaborate on the new album on a drop of a hat. Not only are the two filling their time with recording the album, they find interesting locales such as a Freemason lodge-turned Hotel and an abandoned and “haunted” house to film their music video.

Poster Boys is harshly captured in a fly-on-the-wall fashion and chunkily put together in the same vein as the DIY album. This is not necessarily a negative criticism; both Brandon and Nathan, and to that effect, Director Patrick Burke, are doing exactly what these low-profile consumer-level products are meant to do: be practical and mobile. The film has its comedic moments, particularly when the guys mess with customers, exemplified by a hilarious exchange with a student who was promised a poster in exchange for breakfast and was not sure whether the guys would make good on their promise.

At the end of the film, and the guys’ poster tour, Brandon crams a burger into his mouth reminiscing about the tour and the project’s success, now dubbed Cool Moments. On a high from his accomplishment, which does sound rather impressive, Brandon is considering the possibility of a soft reception of the project. While Poster Boys is indeed an impressive story, the anxieties of not getting recognized is prevalent as thousands of budding musicians and sweaty bands are practicing day after day, recording a potential hit into Pro Tools. Remember, these two funded their recording tour on while selling mass-produced posters, a direct contrast to their intentions to produce something that richly organic and unconventional. Whether Cool Moments drops with more critical acclaim or even a modest financial reward is currently unknown, but in the meantime, Poster Boys is a testament to DIY recording on the run.