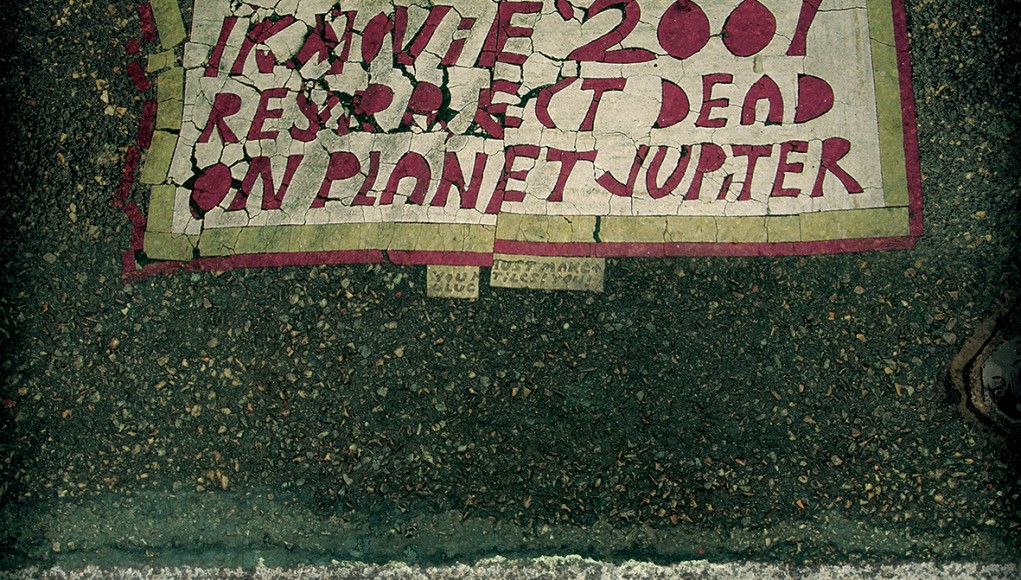 I vaguely remember hearing about the Toynbee tile phenomenon and passed it off as an art project. These tiles are littered across the world, many are impostors, but the legitimate tiles appear mostly in the North East United Stated. Resurrect Dead: The Mystery of the Toynbee Tiles is a documentary that attacks the phenomenon itself and uses minute clues to uncover the point of conception and its progression since the late 1970s.

Justin Duerr, the primary voice and narrator to the investigation, began a relationship to the Toynbee tiles in mid-1990s and has fascinated him ever since. The Toynbee titles mostly show up in Philadelphia and the North East, however a few have shown up in South America. Justin has teamed up with other Toynbee fanatics to begin to investigate small details and clues. Although one of the titles, a ranting manifesto, states that the tiles are the work of one man. However, at this point, the crew has developed a short list of potential suspects.

According to Duerr & Crew, the Toynbee titles is an attempt to present and push theory from historian Arnold J. Toynbee. Toynbee theorizes that dead molecules or particles on Earth can be transmitted to the planet Jupiter where it can be resurrected. The tiler has suggested that a similar concept is included in Stanley Kubrick’s 2001: A Space Odyssey. The film documents the investigators’ wonderful journey clinging to small details and clues, and together, they are able to eliminate their suspects one by one.

Half-way through the film, the investigation takes a short break for Justin Deurr’s friends and families to explain Deurr’s childhood. It is revealed that his early childhood consisted of artistic merit, but his personality turned deviant and became an outcast in high school, which he would dropout of at the age of sixteen. The connection between Duerr and the mysterious main suspect of the Toynbee tiles correlate. They are both outcasts in their social spheres and are given high remarks by their respective family members and those who know them. Deurr’s obsession to reveal the mystery of the Toynbee tiler is equivalent to the main suspect’s obsession to continue to procure these tiles. This connection is barely acknowledged, but a mindful spectator can see these connections, and the film’s break from the investigation is too drastic not to at least consider the connection.

Although the film suggests that the mystery still continues, Duerr & Crew have revealed who, why, and how these Toynbee tiles were being placed across the North East United States. There are a few questions that have been left unanswered, such as how did the main suspect, who has a condition that prevents him from international travel add tiles in South America? Some of these South American Toynbee tiles reveal the most drastic clues. The film truly documents the importance of being persistent, being at the right place at the right time, and having a consistent methodology when researching mysteries.

Resurrect Dead: The Mystery of the Toynbee Tiles is eerie. Not only does the subject matter make you shutter at times, but the urgency that a such an ongoing urban mystery can be solved in our times is imperative. Armed with a soundtrack that adds to the mysterious atmosphere, this documentary will leave you questioning the art that surrounds you. How much does the graffiti and other installations matter to your social spheres? Exit Through The Gift Shop explored some of these questions, but Resurrect Dead posits that not all art is just art; it is a calling out for help, a call from someone who has been neglected by other media forms.