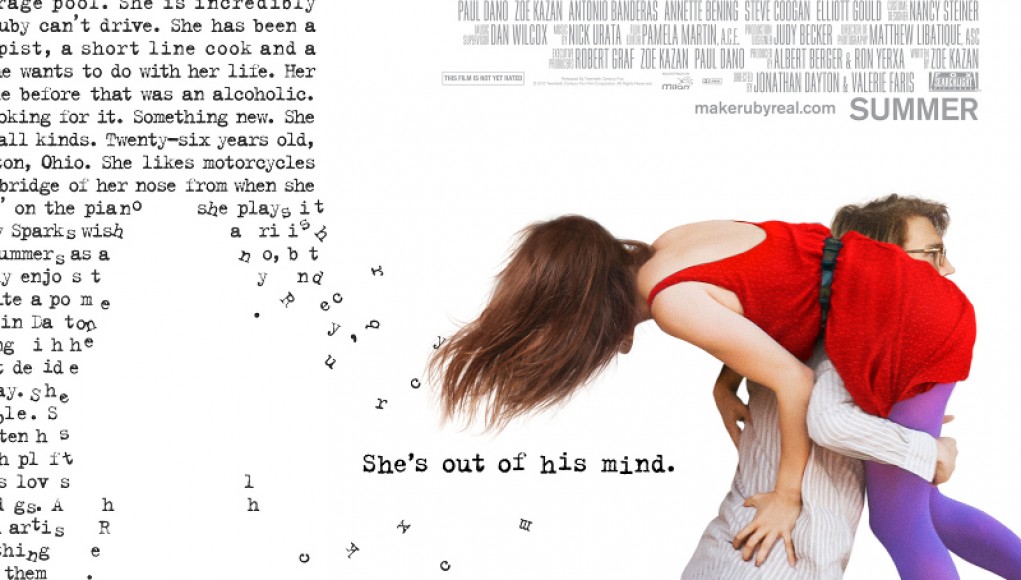 Although still revered for his great American novel nearly ten years prior, Calvin (Paul Dano) has been struggling with new material, especially after his previous girlfriend left him. After a few  sessions with therapist Dr. Rosenthal (Elliot Gould), Calvin gains the confidence to start writing about a girl, Ruby Sparks (Zoe Kazan), who has been appearing in his dreams. With a new sense of confidence, Calvin begins writing his first material in years, and one morning Ruby has manifested herself into reality.

Calvin has found that nearly anything he punches into his typewriter about Ruby will be relayed at almost real-time. He confides in his brother (Chris Messina) about the appearance of Ruby in his life, who admits that the perceived perfection of the women you love will fade as time goes on. It is a profound statement that Calvin seems to forget as the literal woman of his dreams becomes his live-in girlfriend overnight. Once Calvin appears to have found a livable balance in Ruby’s behavior and mood in the magical manuscript he keeps it under lock and key; he might as well be doing the same to Ruby.

Calvin is your typical clichéd self-obsessed, self-serving writer in cinema that feels as though they could never reach the level of their previous work. This is a trope that is found famously in Wes Anderson’s work; main characters who have fallen from grace and struggle to enter the mediocrity of wealth. Ruby also represents an American cinema tradition, the manic pixie dream girl. This character archetype is a post-modern representation of free-spirited women who cannot be tamed and their effervescent uniqueness is a muse to the male character. Except this time, Ruby’s performance as a girlfriend can be fine-tuned to become the figurative and metaphoric girl of Calvin’s dreams.

Calvin is also handling another being that is reliant on his actions, Scottie, his dog. Calvin discloses to his therapist early in the film that Scottie was adopted to help Calvin meet people. Calvin expected others to be attracted to Scottie’s adorable stature, except that Scottie is people shy. Furthermore, Scottie has severe long-term separation issues, exemplified by Calvin arriving home after a long night to find that Scottie has torn through a copy of Catcher in the Rye. They say that dogs take on the characteristics and personalities of their owners, and Scottie is no exception. That is, until Ruby is able to find the heart in Scottie.

It is no coincidence that Ruby is wearing ruby slippers. Like Dorothy, she is dreamt into a world that she has no real control over, and she leaves just as fast. Despite the film’s American romantic comedy tradition fused with the independent sentimentality from the husband-wife directorial team of Jonathan Dayton and Valerie Faris of Little Miss Sunshine fame, Ruby Sparks becomes rather sinister in its climax. With only a few laughs, the film evokes smiles throughout, but the matter-of-fact life lessons keeps this film locked tightly into the dark comedy corner, just like Calvin’s Ruby-incarcerating manuscript.

Ruby Sparks is bursting with talent. Paul Dano returns to the self-suffering novelist character found in Being Flynn, except this time there is an aire of pleasure to his character’s existence. Zoe Kazan, who wrote the script and stared as the eponymous character, evokes the bubbly nature and beauty to bring the manic pixie dream girl into real life. Among the highlighted secondary characters includes a scene where Calvin and Ruby visit Calvin’s mother (Annette Bening) at her new boyfriend’s (Antonio Banderas) home. Steven Coogan, Elliot Gould, and even Asif Mandvi make casual appearances as characters who color Calvin’s world. Even Arrested Development’s Alia Shawkat makes a few brief appearances as a star-struck potential love-interest for Calvin.

Ruby Sparks is no independent masterpiece, but an adequate release that is surprisingly able to retain some originality despite the narrative predecessors. The film announces Zoe Kazan as capable writer who can supersede her namesake (he grandfather is the great director Elia Kazan), and a talented actress ready for larger roles. The Dayton/Faris directing team, who are responsible for some of the most well-known music videos of the 1990s, have a comfortable niche as independent filmmakers with their sophomore theatrical effort.

By no means a sleeper hit, Ruby Sparks does have some ground to stand on and a certain replay value that should give them film some momentum to stay relevant through the next several years. The themes of perceived perfection and puppetry have no generational walls, as we see here, neither do the above-the-line talents found in Ruby Sparks.