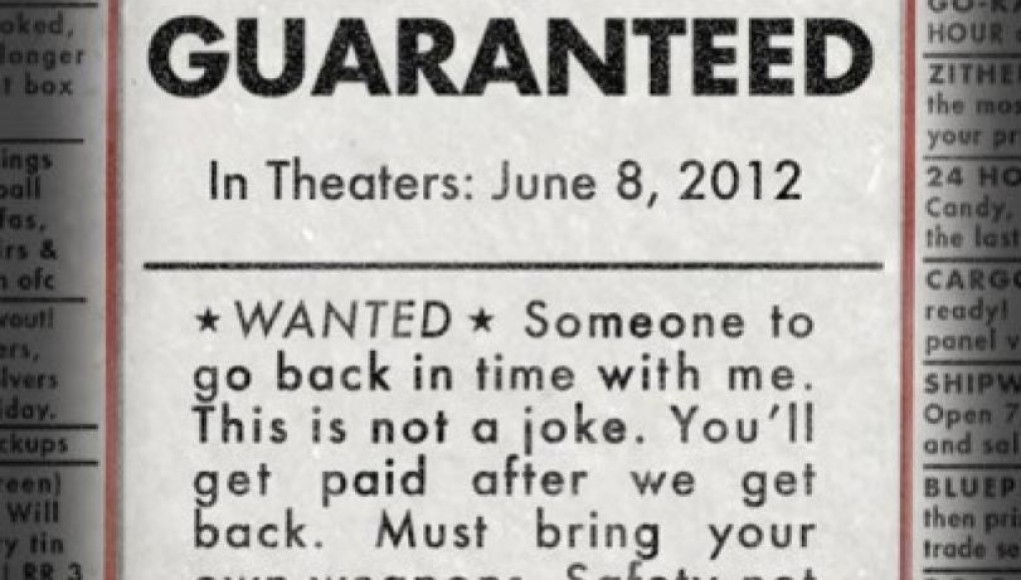 Films with stories ripped from the headlines are not at all uncommon in filmmaking, it was the predominate way to come up with films in the 1930s and 1940s. To rip them from the classified, well that is not nearly as common. Safety Not Guaranteed is a dark comedy based off a real-life classified that read:

“Wanted: Somebody to go back in time with me. This is not a joke. You’ll get paid after we get back. Must bring your own weapons. I have only done this once before. Safety not guaranteed.”

Featuring familiar faces if you are into Mumblecore, Parks and Recreation, and The New Girl, Safety Not Guaranteed is filled with strong performances and one of the most original premises in recent memory.

Disillusioned post-college intern Darius Britt (Aubrey Plaza) volunteers to work with Jeff (Jake Johnson) on a story about the above classified ad. The two, along with Arnau (Karan Soni) travel to Ocean View, Washington to track down the classified’s owner. Darius finally finds Kenneth Calloway (Mark Duplass) and asks to be vetted in order to join him on his time travel journey.

Safety Not Guaranteed is a based off a real-life classified ad that appeared in Backwoods Home Magazine (although the original author has admitted it was filler material for the section). Like 30 Minutes or Less, this film relies on an internet sensation, granted this film is more holistically romantic than that of the former. However, the film also reminds me of the Resurrect Dead: The Mystery of the Toynbee Tiles, where a real-life, creepy mystery becomes an internet sensation. These two films share not only the commonality of being an internet sensation, but because the subjects both promise time and/or space travel.

Darius’ disinterest in her internship, and well, everything, along with some long-carried guilt, is contrasted by her motivation to be a firebrand when investigating this classified ad. She is turned on by the classified’s promise of adventure and the uncertainty of topics such as time travel. She never looks back at her interest in continuing to study Kenneth, and their friendship grows and grows, and before you know it, they are both revealing things about their past that are excellent motivations to go back in time.

Almost everyone in the film wants to go back in time, if they could. Even though Jeff is confident in his sexcapades, he is both nervous and sentimental about seeing Liz, a high school flame. His initial disappointment in Liz’s looks years later are then trumped by the inherent growth of a grown woman. He is immediately smitten, and realizes that a future with her has more to offer than fleeting memories of his past with her. Yet, Jeff caves on rejection and turns to good ole’ boozing to let off some steam, but not without coercing the meek Arnau out of his shell.

My only legitimate qualm about this film is the inconsistency film style. Some scenes are straight out of a mumblecore filmmaker’s van; a shaky camera attempts to be urgent and in your face. Meanwhile, the film’s most important moments have an airy hyperrealism to them that truly captures the intensity. Perhaps it is the lack of a consistent style that helps the film gain traction in adverting criticisms of being a hipster’s cinema paradiso.

Safety Not Guaranteed flounders under itself for much of the film. The film truly turns around in the third act when questions begin to be cleared up as the skeptics begin to circle around Kenneth. Unlike most films that rely on a premise and circle around it, Safety Not Guaranteed is one of the most original films of the year thus far. This film is a gem that truly reveals itself as such at the very end. The film has its more predictable moments, but the growth found in all the characters is sincere.

Without being pretentious, Safety Not Guaranteed is a delightful film that channels the Millennial spirit while utilizing cues of friendships and relationships found in filmmakers such as Hal Ashby. Although Plaza and Johnson both retain their personas from other mediums, they, along with Duplass, have pulled off strong performances that at first feel shallow, that is, until they reveal the intrinsic hurt they have suffered in the past.

Safety Not Guaranteed is one of the few films in recent memory that never makes a promise, but continuously undersells itself by leaning on primitivism, but in the end, provides an original and satisfying ending. Like Moonrise Kingdom, where children act on their very adult feelings, Safety Not Guaranteed has adults acting on their childish fantasies to be a part of something beyond this world. The film’s success is based on how two disparate souls eventually find each other and bring happiness where there was none before.