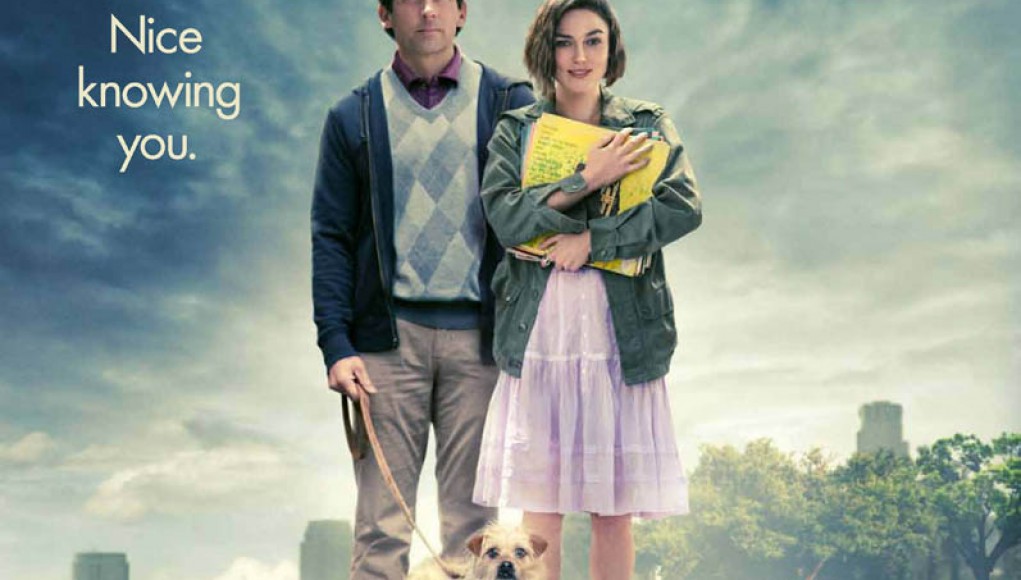 End of the world narratives are a Hollywood staple, and with the numerous instances of zealous religious and cult organizations claiming specific days as the eventual end, they wiz by as fast as publishing deadlines. Seeking a Friend for the End of the World places the premise of impending doom on the back burner, and instead focuses on an warm story of beginning loving relationships despite the close expiration date.

After it is announced that a spaceship mission to destroy an asteroid heading straight for earth fails, Linda bolts out of the car leaving Dodge (Steve Carell) alone. Despite the world’s inevitable end, Dodge continues to go to work, attends end of the world parties, and latter attempts to drink the rest of his wife’s prescription cough syrup and a bottle of window cleaner. He wakes up to a dog staring over him and a note: “Sorry”. Dodge returns to his home with Sorry to see his neighbor Penny (Keira Knightley) upset that she missed the last flight to her native home in London. Dodge just happens to know someone who can fly her to back home.

Seeking a Friend for the End of the World is a revitalizing end of the world narrative when other comparable film attempt to save the world. Here, Dodge and Penny’s individual goals are red herrings, so is the actual impending doom. Instead, the film focuses on the new and old relationships in their lives. Dodge’s wife leaves him the moment the world’s end is certain, and Penny leaves her boyfriend to moment she realizes she may never see her family again. On top of that, Dodge adopts Sorry with no hesitation, and as it turns out, Penny and Sorry happen to be two great friends.

The all-encompassing grasp of mass media creates an egregious amount of fear regarding world events, inflicting undeserving anxieties on to impressionable viewers. A variety of alien invasion narratives have been released into theaters lately (Battleship, Men In Black 3), and there have been many film depicting similar end of the world narratives (Armageddon), all of which depict the these anxieties further, but portray the world being saved. This film, instead, has a quirky center showing how two neighbors who never spoke before, begin a relationship. There is no time to wonder why they never became friends earlier, but merely learn to enjoy the time they have left together.

Carell may have pulled off his most straight character in his career as Dodge. Knightley on the other hand has bounced back after her cunning performance in A Dangerous Method to evoke the over-done manic pixie dream girl, but in a more reformed model. She is a self-confessed addicted monogamist who has just recently broken up with her boyfriend (Adam Brody). It is refreshing to see a character like Penny interact with someone like Dodge, their age gap becomes a non-issue rather quickly since Carell’s demeanor is as soft and vulnerable as Penny’s.

Seeking a Friend for the End of the World is filled with lovely cameos, much of which occurs during a party where everyone’s inhibitions are stripped to the threadbare. Connie Britton, Patton Oswalt, Rob Corddry, all of which portray characters who are not terribly different from their typical roles. Martin Sheen also makes a last minute cameo as Dodge’s estranged father, and Community’s Gillian Jacobs  appears as a friendly waitress on ecstasy in a short scene where the two leads enjoy a mudslide. This dark comedy successfully portrays the relationships between newly befriended individuals against a backdrop of mass destruction. It provokes a few kind laughs, but there are a few moments where the film falls into a lull. Then again, extending those last moments before the world ends matters.