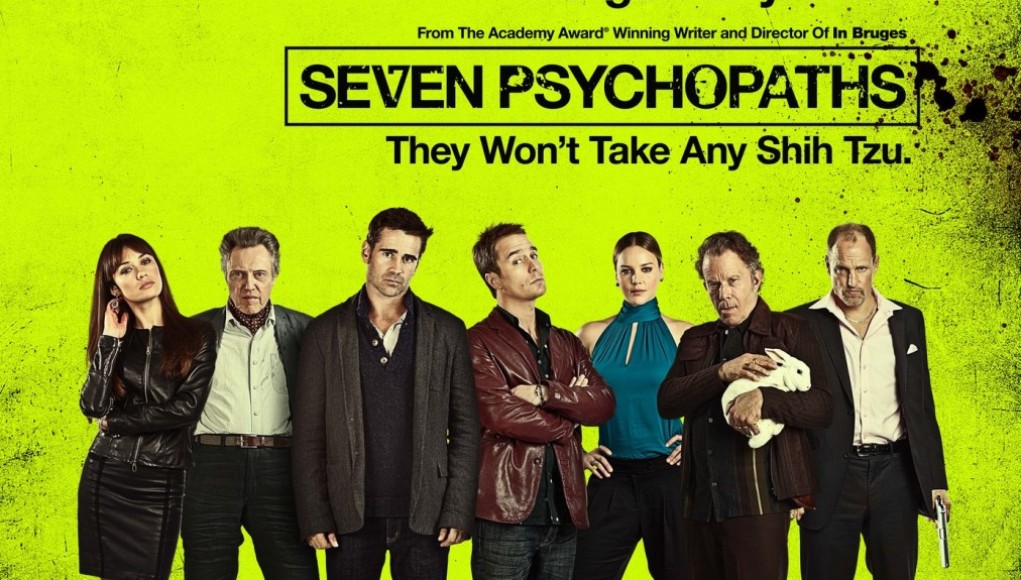 What happens when psychopaths fight psychopaths? Furthermore, what happens when someone attempts to enter the mind of a psychopath? Seven Psychopaths chronicles a screenwriter’s difficulties in crafting an original story while battling alcohol addiction and assisting friends whose canine kidnapping ring has been displaced by a Los Angeles gang. Even with some clever twists and reveals, the film relies on over-used satirical tropes and meta-narratives to make itself stand out.

Marty (Colin Farrell) is suffering from a little bit of writers block as he begins a new screenplay “Seven Psychopaths”, and his penchant for alcohol has ruined his relationship with his girlfriend. His best friend, Billy (Sam Rockwell) runs a dog kidnapping ring with Hans (Christopher Walken) a former Quaker. Charlie (Woody Harrelson), a gangster boss, has realized his dog is missing, and his henchmen have begun to track down the possible kidnappers. All-the-while, a serial killer has been murdering gang members around Los Angeles, and leaving jack of diamonds playing cards at the scene of the crime.

Billy, who wants in on the screenplay, places an ad in the LA Weekly for psychopaths in hopes to give Marty inspiration. Indeed, Zach (Tom Waits) shows up, coddling a bunny, ready to pour his psychopathic soul out. Thus, Marty learns the importance of embedding one-self into a topic in order to capture the essence and innate characteristics of said topic. This also becomes an important aspect of the film’s theme. The film essentially becomes a meta narrative that exposes a fatalism in the characters and the inherent story.

Marty has a few ideas he shares with others, but as it turns out, mostly from fragments pieced together from his discussions with Billy. It does not help that Marty has an alcoholic beverage with him nearly everywhere he goes. While he admits to having the first section of his script in mind, but struggles with the rest. Like the fictional Charlie Kaufman in Adaptation, Marty’s writers block is exacerbated by yearning to resist cliché tropes.

In a humorous scene, Billy goes on a long rant about how he envisions the final shootout in Marty’s script. It is one we have seen before in American cinema; filled with gratuitous violence, melodrama, and the main character holding his dying friend in his arms. Like Donald Kaufman, Billy is the epitome of Hollywood excess, and his streamlined intentions contrast with Marty’s interest in crafting something rather original. Yet, this romantic ideal of a final shootout also raises the inevitable between the three Marty, Hans, and Billy and Charlie and his minions.

This meta-film narrative and fatalistic theme is indeed interesting, but the film never seems to embrace them further. Mentioned earlier, the resemblance to Adaptation is obvious, making Seven Psychopaths slightly less necessary, and although more violent, it is much more tame in terms of offering a satire of Hollywood. However, the film may not really attempt the same goals, probably because writer/director Martin McDonagh channels his Irish heritage—or at least the stereotypes—as an alcoholic writer directly through Marty (notice the resemblance their first names). Thus, we see a framework for McDonagh to express his insistence to resist and embrace Hollywood clichés at the same time and in the same vein as Quentin Tarantino.

Where Marty denies his alcoholism, the psychopaths in the film never deny their personality disorder. As both a contrast and a validation of their disorders, they all have a small sense of charm. Charlie loves his dog dearly, Hans is a pacifist, and Billy is sympathetic to Marty’s alcoholism and raises the issue to him often. Then again, these small fragments of charm are a symptom of this pathology.

Using a crafty patchwork of flashbacks and backstory, Seven Psychopaths is able to pull of some satisfying twists and reveals while offering a biting satire of Hollywood tropes. It is a post-modern satire that balances humor and drama without the arrogance. Then again, the meta-film characteristics may be too cliché, shallow, and over-used, and perhaps it may have already swept itself under the rug. 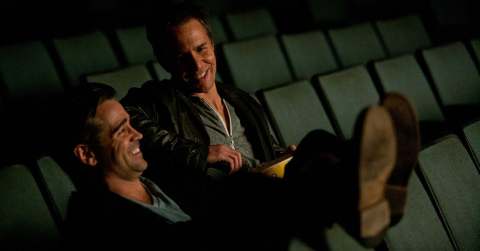