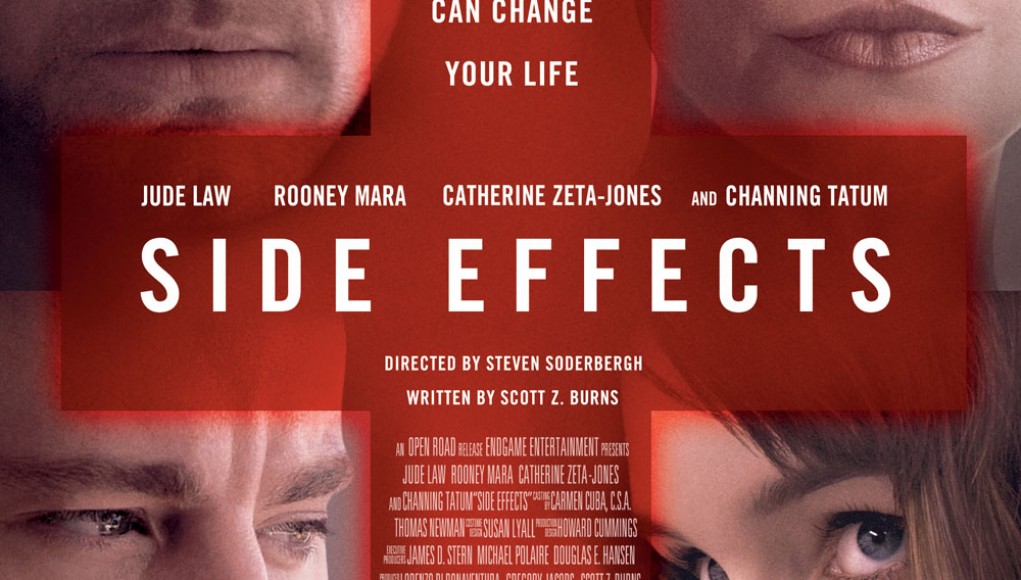 They appear as two-page ads in magazines, lengthy television advertisements, and are slapped on pens, notebooks, and shirts. Pharmaceutical advertisements are presently the iDrug of our contemporary existence: magical pills that can solve anything and hopefully do not inhibit one of the many items in an exhaustive list of side effects. Side Effects appears to tackle this very idea, that prescription drugs may cause more issues than they solve, but the film really becomes a chilling psychological thriller that is complex but never intangible.

Martin (Channing Tatum) has been released from a 4-year prison sentence for insider trading, and his wife Emily (Rooney Mara) finds difficulty adjusting to his return. She attempts suicide by driving her car into brick wall, and is prescribed anti-depressants by Jonathan Banks (Jude Law) a psychiatrist. Unhappy with the effects of the first set of medications, Emily is recommended Ablixa by a friend, a recommendation that Jonathan also receives by Emily’s previous psychiatrist Victoria (Catherine Zeta-Jones). Even after sleep-walking episodes—side effects to Ablixa—she pleads to remain on the drug citing a positive effect on her life, but during another strange sleep-walking trance, she stabs Martin three times, killing him.

What appears to be a thriller about a young woman who became a victim to a side effect of a prescription drug, Side Effects constantly shifts in an out of all the thriller sub-genres, but it also shifts in tone and in perspective. Director Steven Soderbergh has presented an effective psychological thriller that becomes complex, and difficult to follow in the sense that even Jonathan asks for some Adderall in order to maintain focus during his investigation of Emily’s depression. The film revels in its ability to shift focus and confuse, then again, mental illness and a murder without a motive can be also be confusing. At first, we witness events through Emily’s perspective, particularly her depression from the Martin’s return home. When Jonathan’s many sources of income dry up from his soured reputation, the film begins to follow his perspective.

We also begin to watch Jonathan become obsessed and desperate seemingly to the point of mental illness as well. Along with some titular twists, his mental stability must be considered while under this growing threat. He forgets to pick up his step-son at school because he was diligently focused on searching for the truth. His beard has begun to grow in and he is seen drinking beer (do not forget his pleading for Adderall). This obsession begins to reveal a conspiracy, or so Jonathan thinks.

Side Effects is slated to be the last feature film for Soderbergh, who has chosen to retire from film-making to pursuit other mediums. After an effective and suspenseful thriller such as this, it could be seen as a devastating choice for fans. Yet, Soderbergh has released roughly one film a year for the last twenty years (sometimes more), often times helming the cinematography himself. Unlike other bone-fide auteurs, his films’ themes and genres tend to fluctuate wildly, a sort of chameleon that can tackle anything he wishes; sometimes amicably, sometimes with embarrassment. He has never kowtowed towards any particular audience segment, focusing solely on the film at hand. Few directors have been able to continuously maintain that sort of year-after-year output and maintain any sort of consistency, especially Soderbergh. Perhaps this time away will allow him to gather his bearings, let us just hope that those bearings are more like Side Effects than Magic Mike.

That is not to say that Side Effects is an excellent point to re-evaluate his choices. The film is relevant as prescription drug abuse in America has become an epidemic. Big Pharma advertises their drugs on television with clever and cute cartoons, followed by lengthy voice-overs that explain the exhaustive list of side-effects and warnings, which should deter usage. Prescription drug overdoses in America have become the number one form of accidental death, even more than vehicle collisions. Perhaps Emily’s slamming of her car into a brick wall is really meant to be a wake-up call for a population that craves drugs as miracle cure-alls, although we tend to learn the real reason for Emily’s collision, but the ideal is just the same.

One of Soderbergh’s 2011 efforts, Contagion, explored the pandemic transmission of a virus and the panic that ensues. Together, Contagion and Side Effects explore the issues that go with illness, both as a real pandemic threat and as a centralized case. Then there is the 2012 thriller Branded, which also discussed advertising as a conspiracy. Yet, Side Effects proposes pharmaceutical advertisements with this same ideal, but only briefly, but missed an opportunity to really bash the farce that is most pharmaceutical television advertisements, and all the conspiracies that can be inferred by that industry alone. 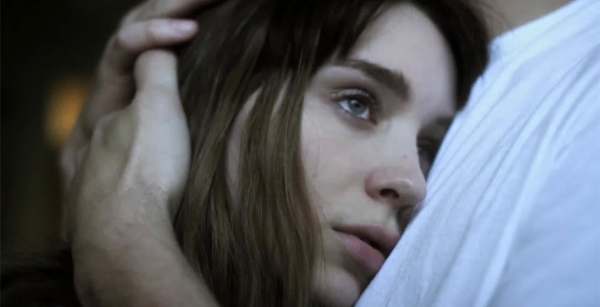