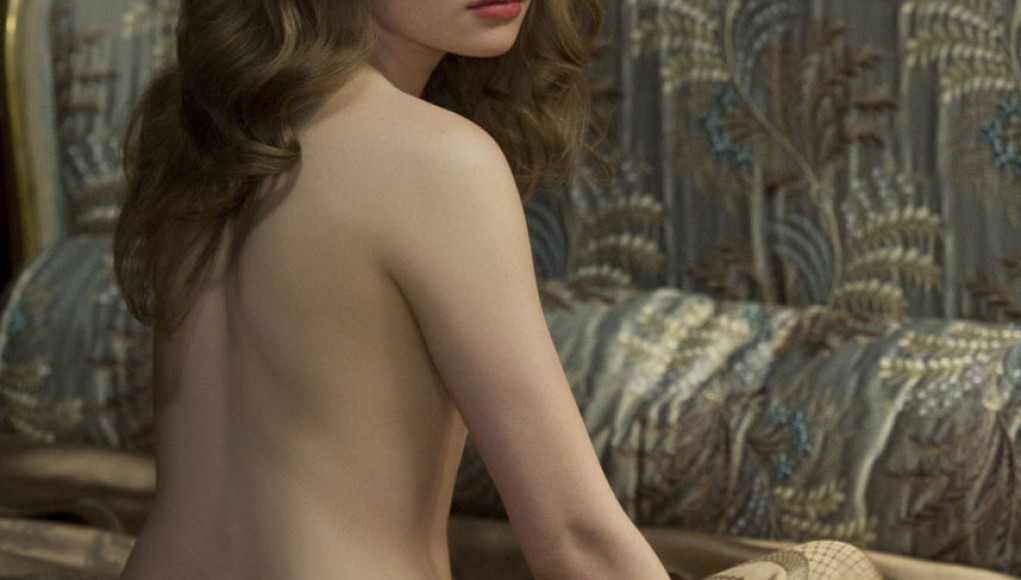 Sleeping Beauty obviously refers to the fairy tale, and of course the 1959 Disney animated feature where the Prince awakened the main character with a kiss. In this 2011 film, Sleeping Beauty perverts the animated classic to explore the tragic life the main character has chosen for herself. It is a character study that portrays the balance between the beauty of a sleeping woman and the events that transpire during her slumber.

Lucy (Emily Browning) holds a number of odd jobs including a medical test subject, a cafe server, and a copy room assistant. Still short on rent, Lucy responds to an ad to provide submissive silver service to a group of wealthy, older males. After her second night working as a submissive, Clara (Rachael Blake) she is provided with another opportunity, one that requires her to be drugged to fall asleep.

Lucy is willing to sell her body in a variety of ways. Not only as a submissive, but as a medical test subject. Yet, she appears to be humiliated only when she works as copy room assistant and a server at a cafe, jobs that only require her to perform mundane tasks for a productive world. Yet, sticking a balloon down her throat and working as a submissive is an easy, thoughtless task for her. When Clara explains that Lucy’s new opportunity, Clara specifically states that she will not be penetrated, and that her vagina will be treated as a temple. Lucy disagrees. It shows how little respect she has for her body and explains how easy Lucy can perform such sexual acts.

She is despondent toward common social relationships. She gives her mother fake credit card information, she has roommates who despise her, and she only appears happy when she visits Birdman (Ewen Leslie), where she fixes him bowls of cereal with vodka. As she falls further into her work as a submissive, she loses all social interactions with others. She only seems to have a sexual attraction with other women in a few momentary connections, connections that appear to be stronger than her sexual interest in men. Essentially, Lucy’s lack of respect for her self is based on her perverse social relationships, and may be unattracted to men entirely.

Black and white are binary colors throughout the film and act as a metaphor to Lucy’s situation in each each scene where they appear prominently. During her stint with silver service, Lucy wears white lingerie that covers most of her breasts while the veteran women wear black lingerie where the breasts are revealed. It is Lucy’s first time doing this service, and her white lingerie expresses that virginity. In class, Lucy’s instructor is analyzing a game of Go, where the pieces are black and white. The game in question has the instructor questioning why a world-class Go player make a catastrophic move? It is a metaphor for Lucy’s expertise with sexual activity.

Director Julia Leigh has had quite a introduction into filmmaking in the last two years. Not only has she written and directed Sleeping Beauty, she wrote the original novel, The Hunter, soon to be released in its own silver screen adaptation. As her debut film, Leigh has strong grasp of the visual medium. The scenes are almost entirely single takes and editing is scarce. The camera pans and zooms so gingerly that it represents the cold and calculated moments in the film. It is a nice contrast to the hand-held, shaky camerawork that has has plagued American filmmaking the past several years. Leigh has written a thoughtful film, filled with cinematic and literary devices. She has immediately shown that she is an artist across multiple mediums.

Despite the difficult subject matter, Sleeping Beauty is perfectly executed to explore this perverse story. It is a film that has a dream-like quality that merges Stanley Kubrick’s Eyes Wide Shut (1999) and Vladimir Nabokov’s Lolita (also adapted by Kubrick) in order to pervert the Disney classic. It does so successfully while commenting on the pathological catalysts to how a empowered female, who has a strange belief that she is in control, falls into a catastrophic position. The Disney classic has the Prince kiss Sleeping Beauty to awaken her and surrounded by loyal dwarfs. Instead, Lucy not exactly kissed and there is nothing loyal by her bedside waiting for her.