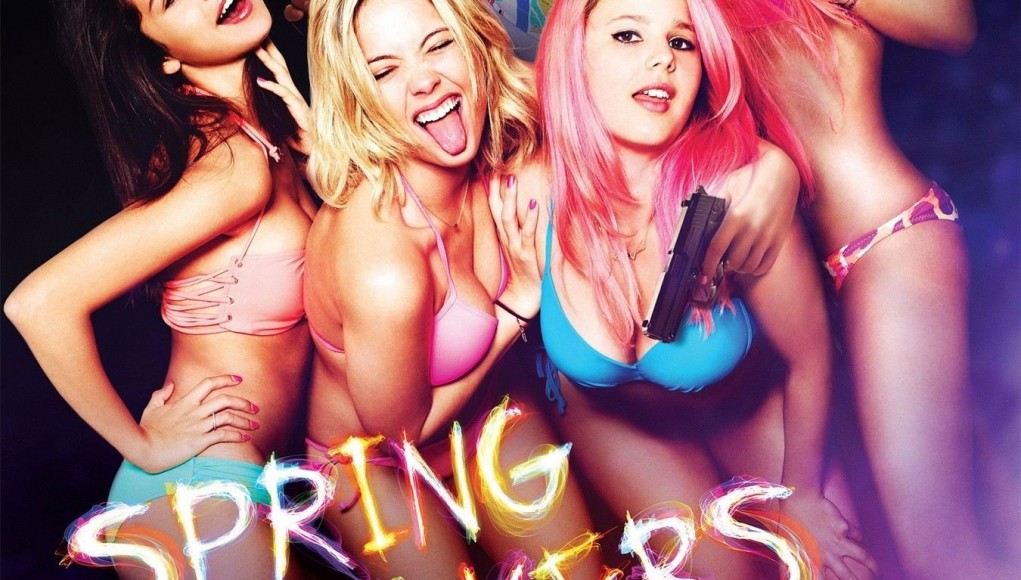 “Spring Break Forever” is the mantra uttered throughout most of Spring Breakers, a subversive satire about recklessness and materialism of the spring break tradition. What used to be a chance for college students to take a brief intermission from the second semester, the spring break week has become one of the most cherished weeks of the academic calendar. Harmony Korine’s Spring Breakers exposes the seedy under belly of this culture through the eyes of young women looking to break monotony and engage hedonistic pursuits, for just one week.

Faith (Selena Gomez), Brittany (Ashley Benson), Candy (Vanessa Hudgens), and Cotty (Rachel Korine) are college friends who have found themselves all alone during spring break, unable to afford the luxuries of running away to the beach. After all of the girls except Faith rob a local restaurant, they take the money and run to St. Petersberg, FL, rent a hotel room, and engage in the hedonistic tendencies common to over-privileged, unsupervised college students tend to do. After getting caught drinking underage, they are briefly jailed, until the local rapper and drug dealer Alien (James Franco) and his friends bail them out.

Early in the film Faith says in a voice-mail to her mother that spring break is a break from reality and the monotonous lifestyle of college. “Break” becomes an understatement, what happens to these young girls is more of an entire disjointment of reality. This unreal existence is matched with the dubstep music that overlays most of the film, a style of music that itself is without a central reality. The gang of four girls get exactly what they want; an inclusive spring break experience where responsibility is lifted and everything is literally on the table. In other words, they find a world without reality, but they find it to be very thin, and only teetering on the edge of lawfulness.

The film is subversive because three of its stars, Hudgens, Benson, and Gomez are famous teenage idols whose iconography exudes that innocent pre-pubescent wholesomeness found in influential Disney franchises. Their inclusion in the film destroys that notion as these two icons become involved in theft, drug use, underage drinking, and good ‘ole fashioned spring break hijinks. However, the satirical nature of Spring Breakers can easily be lost on devote followers, although the incredibly dark tone will certainly offer a clue. One scene that exemplifies this subversion of innocence is when the four girls sing at the top of their lungs, and off-key, Britney Spears’ “…Baby One More Time,” which was released when most of these girls were between eight or ten.

Alien and his entourage express the seedy underbelly that feeds off the recklessness of over-privileged vacationers such as the four girls. Alien has a nice day job as a rapper, headlining the stage at one of the beach concerts, but by night he is a petty thief stealing from spring breakers and selling drugs. Alien references Scarface, and of course he would; all wanna-be gangstas want be Tony Montana, with money, drugs, women, and weapons. When the girls become entangled with Alien’s rivalry, their carefree, endless spring break meant to subvert reality has stumbled down an even darker path.

Half a century ago, teen spring and summer flicks were as wholesome as they got. Young men and women danced on the beaches to the emerging sounds of rock ‘n roll, bikinis were just becoming a thing, and lifting weights next to the shore was the norm. Yet, Spring Breakers is a drastic departure from the teen Beach party films, although it is very much the product of decades of evolution beginning with MTV’s The Grind and growing exponentially with the rise of cheap technology where teenagers have a sense of freedom that the teens of the 1950s could only dream of. The double standards of beauty and the fear of missing out have perpetuated the urge for seemingly normal college students to drop all inhibitions and expend their college loans for a single week, and this entire process has become a rite of passage in and of itself.

As with most uninhibited partying for days on end, there is the eventual hangover, both physically and mentally. Just watching one of Harmony Korine’s films itself requires a day or two to shake oneself of the images that cannot be unseen, but Spring Breakers is easily his most accessible. Korine, who wrote Kids and directed daring films such as Gummo, has made it a point to depict the darkest corners of America, even if they are right in front of our eyes or just around the corner.

Satire, although fun and enlightening to those who “get it,” for those who do not it can be dangerous. Gomez, Hudgens, and Benson, all wholesome American teen idols, might lure their younger, highly impressionable legions of fans down that dark path. Their associations with child stardom have been weaved into a narrative that expresses the consequences of unhindered privilege. While the lessons are painfully clear in the film, those moments of inconsequential freedom might still be more influential than the lessons learned. Regardless, Spring Breakers is one of Korine’s most realized projects, and its debauchery is tame compared to the filthy mouths of the children in Gummo or the hopelessness yearning for celebrity in Mister Lonely.