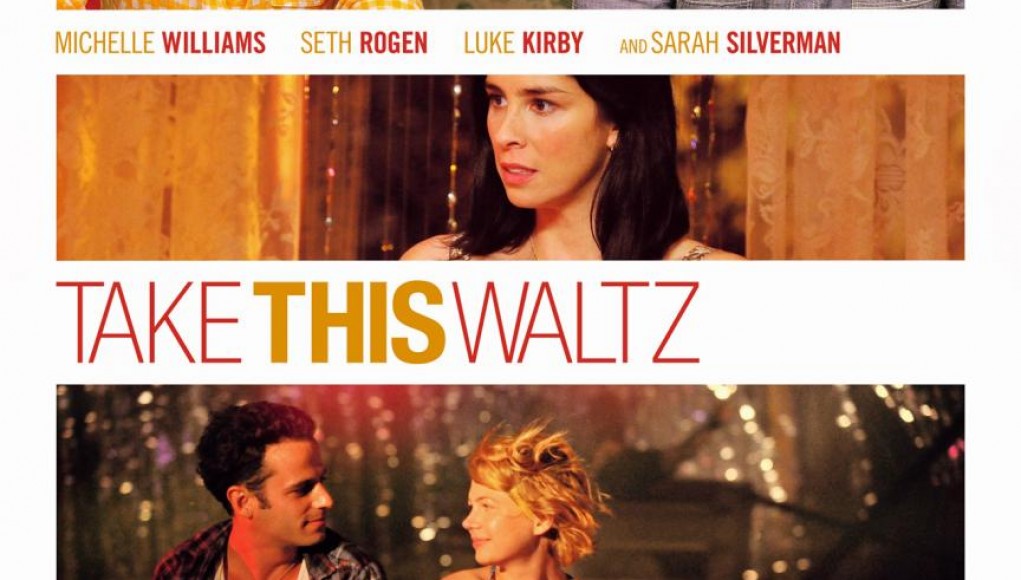 Wiser men and women at one point begin to understand there is an inherent pleasure and simplicity of loyalty. Take This Waltz is a comedy-drama that illustrates a woman’s struggle with temptation and change of heart. This 2011 independent film features a cast of familiar faces performing some of their best work excelling at portraying the subtleties of their characters.

Freelance writer Margot (Michelle Williams) runs into Daniel (Luke Kirby) at a Colonial Reenactment theme park while on assignment. Daniel spots Margot again as she boards a plane, but this time in a wheelchair, and coincidentally they are assigned seats next to each other. After calling Margot out of faking her need for the wheelchair, they enjoy a playful plane ride, and then a taxi, which takes them back to their homes, which are practically across the street. As the two have shown to have quite the affection for each other, Margot leaves the taxi and proclaims that she is married

Take This Waltz is about clumsiness and flaws of common people, as well as the temptations that threaten their lifestyles. When Margot is caught by Daniel regarding her wheelchair, she admits that she uses it because of her anxieties of catching connections between flights, and prefers to have a direct flight. Her fear of connections is her insistence on one-on-one interactions, and many of her connections between other characters are filled with awkward dialogue. The theme of temptations exists not only with Daniel across the street, but with her sister-in-law Geraldine (Sarah Silverman) who struggles with alcoholism on a daily basis.

Margot’s marriage with Lou (Seth Rogen) who is also a writer working on a cook book about chicken is also rocky. They still have the love to flirt and horseplay, but the real intimacy is gone. Lou is incredibly involved in learning about the many chicken recipes he can write about, but Margot is ready for a different experience. She still has a bubbly attitude about life and not only is she interested in certain possibilities with Daniel, she joins Geraldine and her friend to an aerobic swimming class, where she gets a bad case of giggles, provoking her to urinate in the pool. As the three friends shower together across from the other women, Margot specifically says how she wants something new. However, one of the older women, obviously with years of experience, explains bluntly that even the new gets old after time. As we see with the rest of the film, indeed it is true.

The cinematography of Take This Waltz, although not perfect, has some unintended moments with similarities to Italian neo-realism. The film has lovely slices of life; small moments where the most minute details occupy the narrative, mostly supporting Margot’s bubbly character. For example, early in the film while she is makes breakfast, she gets up on her toes while she pours batter into cupcake pan. That small, intimate shot shows the love and affection this film portrays. However, the film is not without a few errors that creates a balance; seeming static shots a ruined by a small shaking of the camera which happens sporadically throughout the film.

Michelle Williams, like always, shines. She channels a similar role in Blue Valentine, but with a more optimistic and bubbly character. Kirby, her opposite, portrays the salt-of-earth and passionate artist, but other than a few verbally explicit scenes between him and Williams, the performance is minimal. Rogen on the other hand may have succeed one of his most subtle, and most likable roles of his career. Silverman fits her character well, stark and blunt about her failures, often times with the vulgarities that made Silverman a household name.

Although using a rather tired premise, Take This Waltz does have some originality in its narrative which is supported by a highly capable cast who connect through adorable moments between the characters. The title is taken from the Leonard Cohen song of the same name, itself a translation from a Federico García Lorca poem. The song is played at the perfect moment during the film’s denouement, and the song has a optimistic rhythm wrapped in a lonely tone, the utmost perfect song to wrap up the film.