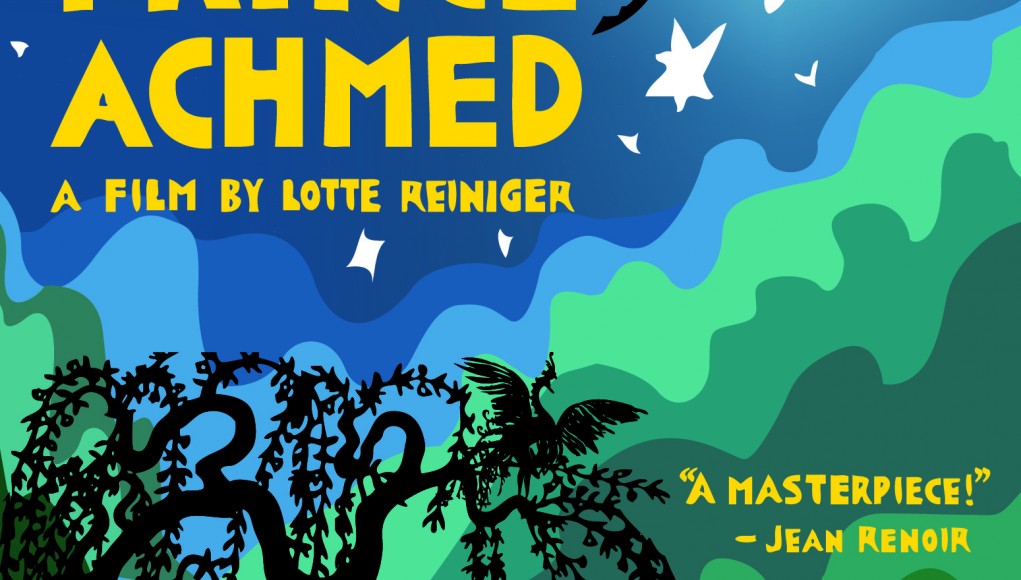 Considered to be the earliest surviving and completed animated film, The Adventures of Prince Achmed is a beautiful rendition of “The Story of Prince Ahmed and the Fairy Paribanou”. Animated using silhouettes in a stop-motion fashion, this early silent film had been restored in the late 1990s with a gorgeous orchestrated score to accompany it.

An African sorcerer uses his magic to create a horse that can fly, presenting his creation to the Caliph of Baghdad at his birthday celebration. The Caliph yearns to acquire the horse, but the African sorcerer only offers it in exchange for his daughter, Dinarsade. Prince Achmed choose to take the horse for a test ride that launches him into the air, unknowing how to truly guide the horse. The Sorcerer is placed in jail. Not until Price Achmed is carried by the horse to the stars does he realize the lever on the back of the horse will guide him back down to earth, to the land of Wak-Wak.

Upon meeting a harem of beautiful women, Achmed leaves to find the beauty of Peri Banu, the ruling maiden of Wak-Wak. Achmed takes Peri Banu to China, where he professes his lover to her. The African sorcerer escapes from prison as a bat and reaches the two in China, where he kidnaps Peri Banu along with the magic horse back to Wak Wak. Achmed follows suit, but is too late, and the gates of Wak Wak are closed, and can only be opened with the magic lamp.

Achmed befriends Aladdin who claims that he was once in love with Achmed’s sister, Dinarsade, and had barely escaped the Caliph’s notice to behead him. Achmed and Aladdin must retrieve the magic lamp to save Peri Banu from the demons of Wak Wak because she had followed him earlier.

The Adventures of Prince Achmed is a gorgeously animated film of an Eastern fairy tale. While the foreground animations are of silhouettes, the degree of details is intrepid. If you look at each frame by itself, it can account for itself as its own work of art. The fact these these frames together can produce such a wildly imaginative animated retelling of this fairy tale is impressive. This unique style was invented by Director and Animator Lotte Reiniger, originally shot in black and white but color tinted, excellently of course.

Armed with an complementing score (from which source print I saw is unknown) that assists in telling the story like looney tune. While the film is a silent film, the intertitles appropriately match the ongoings of The Adventures of Prince Achmed perfectly.

For the film history lover, The Adventures of Prince Achmed is a must. It shows immense creativity for a time where German Expressionism was firmly the main cinematic export of the Weimar Republic.