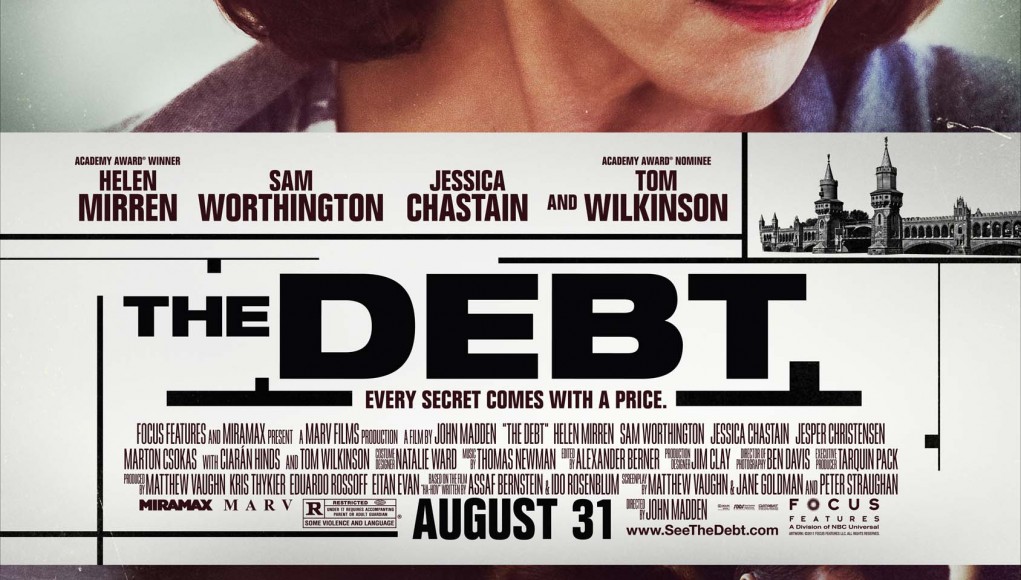 The truth may set them free, but would in turn cripple the morale of Israel and its secretive Mossad. The Debt is an Americanized remake of the 2007 Israeli film of the same name. At first it is a tale of both revenge and justice, and later, keeping a deep, dark secret from resurfacing. In all, The Debt is an efficient but fictitious thriller that examines the depths that rogue agents go to carry out their mission.

In the mid-1960s, Rachel (Jessica Chastain) unites with two other Mossad agents, David (Sam Worthington) and Stefan (Marton Csokas), to capture a former Nazi doctor who had performed experimental surgeries on Jews in concentration camps. A botched plan, a captured doctor, and a love triangle will incite suggestions of betrayal and anxiety among all four. In the late-1990s, Rachel is now much older (played by Helen Mirren) and her daughter is releasing a book on her mother’s bravery some thirty years prior. But David (now Cirán Hinds) has returned and committed suicide by stepping in front a of a truck. Stefan (now Tom Wilkinson) has explained to Rachel that their long-held secret of thirty years is in danger of being revealed.

The multiple struggles depicted in Rachel’s point of view from both time periods were perfect and splits the film into two parts. However, the earlier setting has a much more interesting plot as the spectator was initially provided with an alternative story earlier in the film. Seeing a particular scene again and obtaining a different conclusion to that scene was striking, and provided a resourceful way to shift the film’s story into a new direction.

The performances were decent all around, with Mirren, Wilkinson, and Worthington providing the best performances. However, the roles in general were rather bland, and the talents at least found a way to show their thespian muscle, but the actual character building is story-driven and not talent driven. Last, in the present day setting, it was difficult to determine who Stephan and David were until later in the story when their characters were better defined until after the 1960s sequence.

The film had some similarities to that of Steven Spielberg’s Munich, which fictionalized an on-going effort to eradicate the PLO members that assembled the massacre of Israeli Olympians in Munich, Germany. While Munich examined how revenge and terrorism never truly ends and is circular, The Debt is entirely fictional but raises similar questions of revenge and justice. Overall, The Debt is indeed efficient at telling the story, but that is where much of the film’s substance ends, rendering the film forgettable.