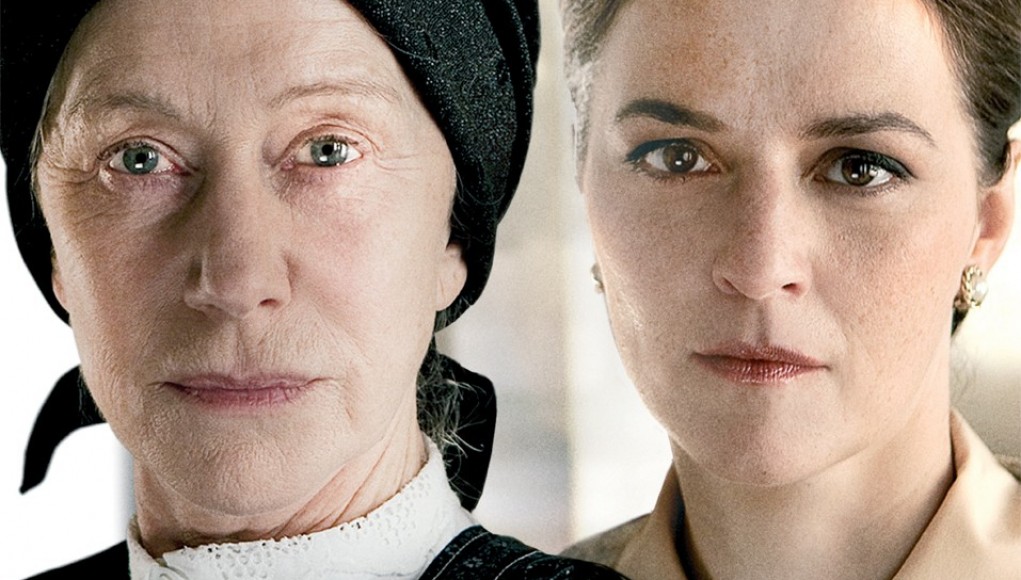 How does one develop a cynical attitude and maintain a vocation such as a maid? The Door explores at capricious relationship between a novelist and a maid, one where the a lifetime of trauma dictates erratic behavior and an essence of tough love.

Magda Szabó (Martina Gedeck), a novelist, hires the stoic maid Emerenc (Helen Mirren) so that Magda could write her next novel without distractions. Their relationship becomes turbulent almost immediately as the eclectic Emerenc starts Magda and her intellectual husband on a strict regimen to keep their home clean. There are no defined hours or amount of work and Emerenc’s mood swings are just as unpredictable. Before long, Magda witnesses many of Emerenc’s wild outbursts which are balanced by dreadful stories of loss. Despite these fluctuations in mood and the seldom sharing of emotion, Emerenc is strict about keeping her humble home private with her door always shut.

Emerenc is a stoic woman who is strictly disciplined with a habit of giving. Her gifts and generosity, while appreciated, are sometimes delivered at strange times, and the only reciprocal gesture she tolerates is the enjoyment of her thoughtfulness and display of her gifts. Monetary or other reciprocal gestures are offensive to her; she is proud of her tough love. Yet, she also charges for her services based on the time it takes to do the job and diligently vets a potential client’s credentials; “I don’t just wash anyone’s dirty linen.”

Much of the film is told in vignettes, a fitting structural choice for a memoir, which itself is an album of memories where the sum of their parts becomes a perplexing story about the tempestuous relationship between a novelist and a maid. Between the strange or outrageous moments there are the empathetic stories that brings Szabó’s world to equilibrium.

These vignettes are an appropriate choice since The Door is an adaptation of the eponymous 1987 Magda Szabó memoir about Szabó’s experiences with Magda from the early 1960s and into the late 1970s. Directed by István Szabó (no relation), the film depicts the most cherished moments as a gift and the most surreal and awkward scenes with a strange but true temperament.

Helen Mirren’s performance may be the film’s sole acknowledgeable attribute, thankfully because Emerenc’s character is so dynamic and broad. From the first moments when we meet Emerenc, Mirren delivers her character’s inherent cold but staunch mannerisms with a simple lack of eye contact. Mirren unanimously carries the film, an observation that truly reveals itself during Emerenc’s long disappearances.

The Door is about how one may develop an institution of tough love and deliver it a turbulent but affectionate way. She vets her potential clients so she can have the faith to invest that tough love in them. It is a heart-warming gesture that the film does convey, but Mirren’s performance ultimately drives the story.