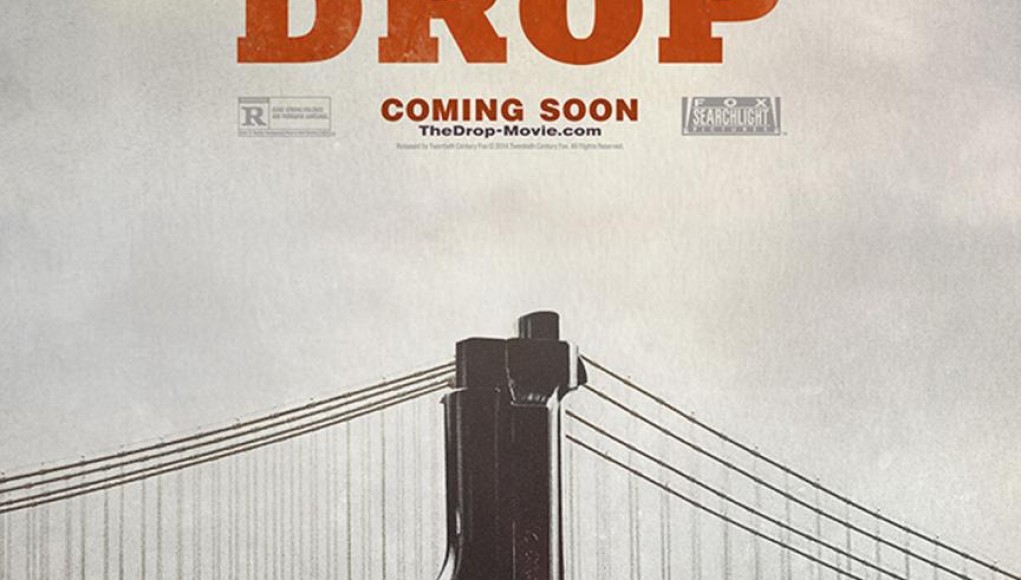 In the testosterone-drenched film The Drop, director Michaël Roskam uses Dennis Lehane’s screenplay (his first), a fine supporting role from James Gandolfini (his last), and a puppy named Rocco to create the space for a career-defining performance from actor Tom Hardy.

In this his second film, Roskam’s artistry—seen full-blown in his Oscar-nominated Belgian-language film Bullhead (2011)—transfers well to the streets of Williamsburg, Brooklyn, and cinematographer Nicolas Karakstansis’ early-winter palette provides the perfect canvas for Lehane’s muscular dialogue.

Cousin Marv’s Bar, still managed by the rancorous one-time owner Marv (http://www.cinemafunk.com/tags/james-gandolfini”>Gandolfini), is now owned and used by the Chechen mob as one of several points for dropping laundered cash. Nothing gets past Bob Sangowicz (Hardy), the self-possessed bartender and central character around which the spokes of this story rotate. Bob is the bridge between Marv and the Chechen boss Chovka (the icy Michael Aronov), and he links the storylines of Nadia (http://www.cinemafunk.com/tags/noomi-rapace”>Noomi Rapace) and Eric Deeds (Matthias Schoenaerts – the star of Bullhead and co-star of Jacques Audiard’s Rust and Bone). He also fields the bulk of Detective Torres (John Ortiz)’s questions, courts Nadia, and adjusts to his new life with Rocco, the loveable puppy reflecting warmth onto this grim neighborhood.

When Lehane adapted his short story “Animal Rescue” for the screen, he moved the setting from Boston to New York, and the sparse source material gave Lehane license to write directly for the screen. Together with the film’s sonic elements, Roskam’s editing and focal manipulations keep the movie’s 106 minutes fresh. This New York melting-pot-boiler slow cooks at just the right temperature toward the titular drop on Super Bowl Sunday.

Due to their shared language, the Chechen and Russian mafia are often confused in the West, and increased appearances by both in contemporary storylines, such as Denzel Washington’s new film The Equalizer, David Cronenberg’s Eastern Promises and James Gray’s (himself of Russian-Jewish descent) We Own the Night and Little Odessa­— indicates their rise in the zeitgeist. Lehane’s comic dialogue cuts through a brutal situation:

“They’re Chechens, not Chechnyans….I think it’s like how you don’t    call people from Ireland Irelandians.”

Lehane’s subsequent novelization of the film goes by the same name, but the 224 pg. trade-back from William Morrow is set back in Boston. Look for the patch “Mystik” on Bob’s omnipresent jacket in the movie – it’s an allusion to Mystic River (2003), and Lehane’s 2001 novel of the same name. Other Massachusetts references are Nadia’s job at the Oakmont Grill (an actual eatery in Dorchester, Lehane’s hometown), and the very busy and talented actress Ann Dowd, a Holyoke, Mass. native who plays Dottie, Marv’s sister.

The emotional buttons of this film are pushed time and again by Rocco the puppy, and, as Roskam says in an interview, “When we save a dog, we save ourselves.”

Much like his role in http://www.cinemafunk.com/movie-reviews/lawless”>Lawless, Hardy is part of a large, convincing cast, but here he carries the story and the others along on his powerful back. In the roaring silence of this movie’s denouement, Detective Torres asks him, “They never see you coming, do they Bob?” Bob just looks away and wipes down the bar.