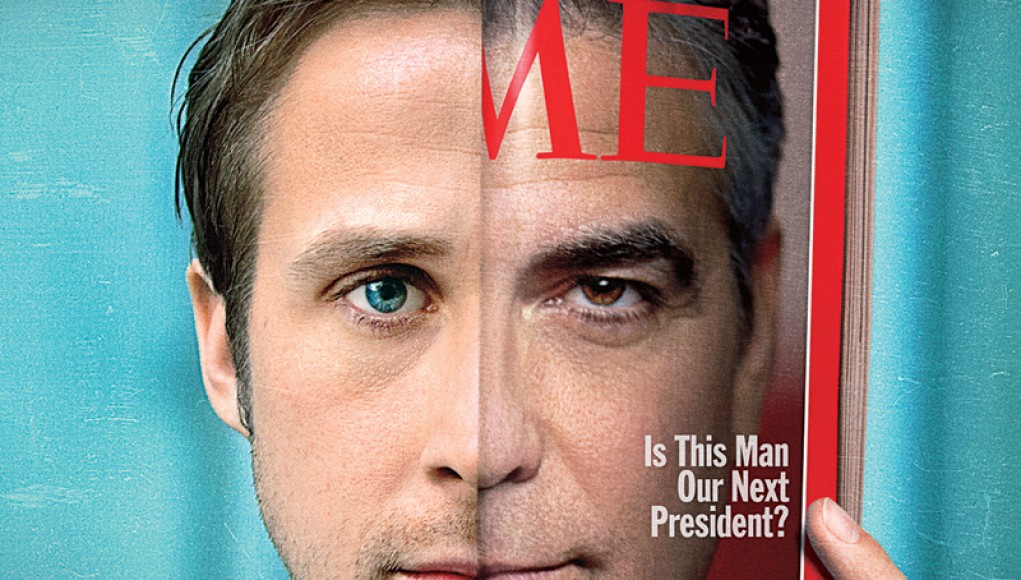 The Ides of March is a political drama that lands in theaters conveniently during the height of the Republican candidate crisis. George Clooney returns as director and co-star in a film that depicts the microcosm of scandals found in media coverage of political campaigns for several decades now. We are privileged to see a political star from a humble grassroots campaign grow to become a major factor in a Democratic primary,and  only one misstep allows him to lose control.

Stephen Myers (Ryan Gosling) is a young, talented, and naïve Junior Campaign Manager for candidate Mike Morris (George Clooney) during the Democratic primaries. Morris’ populist rhetoric is not enough to pull ahead of his rivals to take the DNC nomination. Senior Campaign Manager Paul Zara (Philip Seymour Hoffman) is a veteran at political campaigns and knows the key cards to play. After a Democratic debate, rival’s Campaign Manager Tom Duffy (Paul Giamatti) begs for a brief meeting with Myers; the beginning of a spiraling path of destruction involving a love triangle with campaign intern Molly (Evan Rachel Wood).

The Ides of March is an obvious nod to the betrayal and assassination of Julius Ceasar. Loyalty and betrayal exists within each of the characters, and towards the end, no one is innocent, just as in real politics. Myers’ young and promising career is halted by his curiosity of his rival’s campaign manager’s interest in meeting him and jumping to the opponent’s campaign. This incident sparks a chain reaction in Myers’ career spanning the next several days. The urgency of the campaign becomes too fast for him to keep up and react to. Interns beg for his attention, a journalist (Marisa Tomei) twists his arm for scoops, but the real sharks, the politicians and their campaign managers, are the ones who get the best of him.

It may appear that Myers is treading water, but instead he has bait and switched nearly everyone around him. He takes a tragic event and uses it as foothold to climb ahead. His actions exemplify the harsh realities of political campaigning. How one week, two politicians of the same political party can be bitter rivals, and the next, one offering their support of the other to win the greater race. Furthermore, how those who work on campaigns are just as in it for themselves as they are for the politician they are supporting. Myers learns how quickly betrayal can cause damage to one’s career or campaign. He is also the one to learn the fastest, and take his experience of failure just days prior and turns it around in his benefit.

Gosling’s performance is, of course, stellar. He plays the naïveté par excellence and is able to turn the situation around and become the manipulator. Clooney pulls off a two-faced persona that requires the charm of a populist candidate and immoral secrets of the slimiest candidate. Wood, depicting a twenty year-old, barely looks the part. But she pulls off the wild escapades her character demands with aplomb. Although a good part, Wood can perform so much better and is limited by the character’s role in the film. The most striking aspect of the talents in this film is that of Hoffman and Giamatti. The kings of contemporary character acting appear together as rivals. Their interactions with each other is the summit of turn-of-the-millennium American acting. I would not be opposed to seeing these two rival each other for Best Supporting actor during awards season. Tomei’s few appearances are perfect as a pushy and insistent journalist who best explores how in politics no one is your friend.

Clooney’s directing has taken a very mature turn. His fourth feature-length film sheds the pompous nature his directing showed in the past. The scenes are calmer, allowing for the true content of the film to fuel the suspenseful moments between key scenes. There is a cleverness to watching all of these character succeed in the campaign, yet fail in the relationships they have with each other. Clooney’s directorial talent has taken a fantastic step in the right direction, of course, not to count out the superlative script. The Ides of March portrays the common assumption that all politicians are liars, no matter their populist rhetoric. Films such as The Parallax View and Nashville explore the assassinations of populist candidates as a reflection of America’s deeply-rooted bigotry against drastic change. Here, the film explores how even the most charming, and seemingly clean candidate always winds up in the wrong bed. While it is certainly a lesson to be learned and carried into the 2012 elections, it is a lesson not unheard before. In fact, it is barely a reminder.