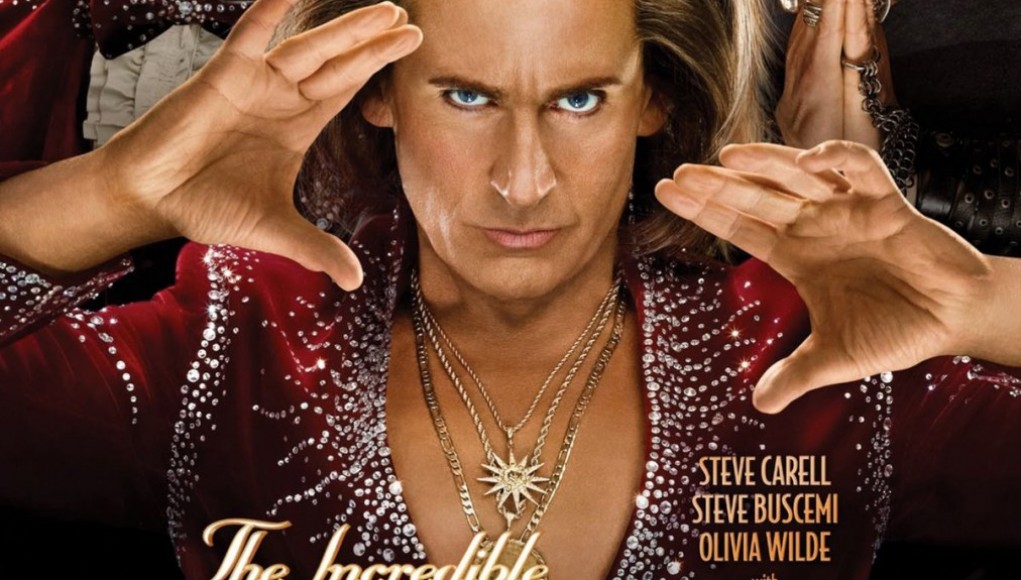 From vaudeville to cinema, magicians and/or illusionists have attempted to dazzle and update their acts as time went on. However, they cannot just perform their tricks, they have to sell them to the audience. The Incredible Burt Wonderstone chronicles the eponymous character’s fall from grace and his attempt to recapture the magic.

When a young Burt is inspired by magic kit from Rance Halloway (Alan Arkin), he captures friendship of Anton, and the two become partners in magic. Two decades later, Burt Wonderstone (Steve Carell) and Anton (Steve Buscemi) have an exclusive show in Las Vegas. They have mechanized their act so that if an assistant quits during a performance, any female can be take over, even Jane (Olivia Wilde). When Steve Gray (Jim Carrey) becomes the next hot thing, Wonderstone and Anton’s act loses viewership and the pressure to evolve increases.

They call themselves magicians in the film, but in real life, the people who perform these tricks call themselves illusionists. As we see in the film, Steve Gray also confuses his ability to endure pain as an illusion, but these tricks are merely producing shock value rather than wonderment. Gray’s image is a parody of the many “illusionists” who took to television shows where they shove cameras in their audiences’ faces, capturing and embellishing any form of a reaction. Wonderstone and Anton also represent the has-been magicians who have become complacent with their work. unable to see their competition around the corner.

Illusionists, even con-artists, should be able to interpret the current cultural zeitgeist and adjust their act accordingly. We saw a similar premise in The Great Buck Howard, where John Malkovich’s character relied heavily on one particular bit, but struggled to remain relevant as time went on. This reliance on the familiar is Wonderstone’s failure, particularly when he attempts to bed his new assistant Jane, and objectifies her as any ole’ Nicole. He fails to see the potential in his new assistant, and he also fails to see the pressure to evolve.

The film also places Wonderstone in the center of the Las Vegas phenomenon where performers can enjoy lengthy tenures in twice-daily performances in front of adoring vacationers. These hotel casinos offer it all, and Wonderstone never needs to leave the hotel. His suite is furnished with all the bells and whistles, and sex can be found by plucking the most attractive female from the audience of that night’s performance. His act could be performed with his eyes closed, and to his partner’s chagrin, there was no reason to change or evolve.

Evolution is key to survival, but merely taking things to the next level is not the proper way to survive. Gray continuously harms himself in order to shock rather than captivate. His team is incredibly mobile in order to take advantage of the idea that “magic” can happen anywhere. However, the magic that Gray thinks he is creating belongs not on a glamorous Las Vegas stage or surrounded by intrigued fans on the street, and instead alongside the other circus freaks, such as in Freaks. Wonderstone eventually goes back to the foundations of his interest in magic; being a performer that is just as interested in the magic as the audience. In other words, the performers should create the perception that the inner workings of an illusion do not exist.

What also does not exist in this film is laughter. Billed as a comedy, The Incredible Burt Wonderstone is devoid of any break-out laughter, sad considering two of the most commanding physical comedic performers of the last two decades are at the front of the stage. However, the joke may be on the audience who fails to see itself in the mirror. One scene features a live audience member vomiting after one of Gray’s tricks, only to immediately return to clapping like a mindless monkey.

Inducing vomit is not the same as inducing the wonder that is an effect of a well-executed trick. Wonderstone assumes that magic left when Gray became the next big thing. The film tends to suggest that the magic left when Anton did. Yet, it is Rance Halloway who concludes that the magic is created by a social contract between the performers and their audiences. The Incredible Burt Wonderstone is unable to create such a contract between screen and the audience, and like in Oz: the Great and Powerful, tricks do not substitute story.