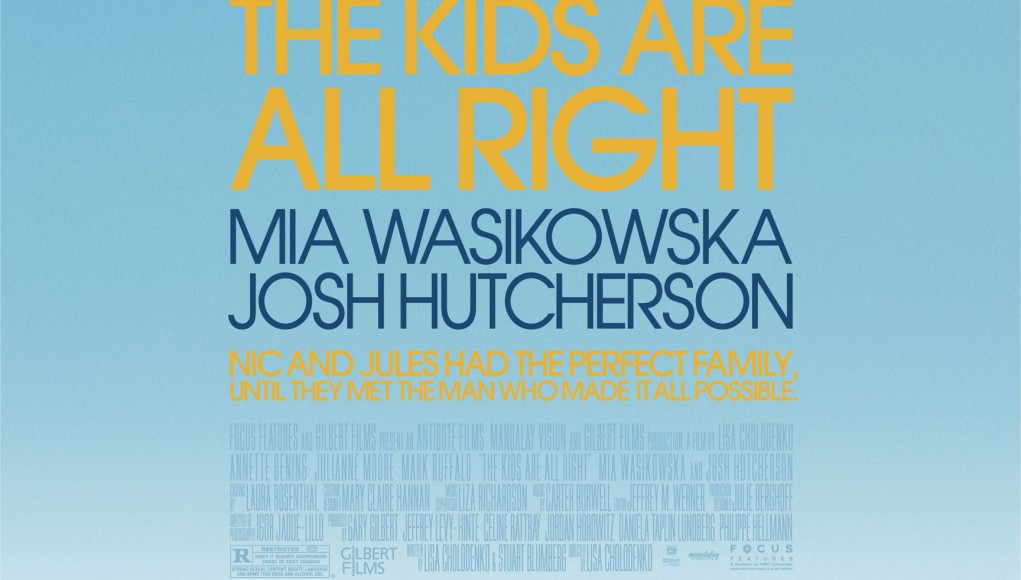 The Kids Are Alright is about the American family. Forget the lesbian couple, they are parents. The implicit truth in this comedy is easy for nearly anyone to align themselves with. The challenges of raising children and a married couple growing old and somewhat apart is a traditional story in cinema and in reality and The Kids Are Alright is promptly placed in this realm albeit with just a different touch to the details.

A lesbian couple, Jules (Julianne Moore) and Nic (Annette Bening) find the difficulties in raising their children and their own romance. Jules who has been feeling neglected romantically is starting a new landscaping business with little support from Nic. Their children Joni (Mia Wasikowska) and Laser (Josh Hutcherson) have chosen to seek out their biological father, for whom their mothers tapped for sperm donation. Their initial contact and meeting with their father, Paul (Mark Ruffalo) goes well, and all looks well to introduce him into this unique family unit.

As Joni and Laser begin to accept and enjoy the their biological father’s presence in their lives, Nic begins to feel threatened by Paul who is hired by Jules to be her first landscaping contract. Jules and Paul begin an affair that would ultimately betray the initial welcoming from the entire family.

The film portrays a marriage in conflict. While the marriage in question is that of a lesbian couple, the story and challenge is familiar, and the sexual orientation—although important—is not in the spotlight. Jules and Nic have done an exceptional job. Two gorgeous children, a beautiful home; the American Dream. It is this setup that is all too familiar in American cinema. Everything may appear to be solid, but in fact, everything is close to toppling.

Children are at the pinnacle moments of their teenage years, yearning to find themselves and thus so needing to know their father. Nic certainly portrays a worried mother, concerned that her children’s seeking of their father is a chance to be replaced. Had she not performed well as a mother? It is a position that any parent, lesbian or not, would ask if their world was shaken by introduction of the biological parent. The children are doing what children do best, both hesitating and acting on their curiosities that provoke them to discover that complex relationships are now beginning in their lives. These curiosities tempt them to find where they have come from, it is a human trait we cannot escape.

The film itself shows a highly liberal California. Paul as provider of organic and locally grown produce and Jules and Nic as a set of hip, but still disciplined lesbian parents. The movie wants to be that of a film that shakes the morals of America. Instead it fits right in. The “organics” of the film appear to do nothing more than push a vision of the West Coast that does not appear to be wholly accurate and is if anything, rather annoying. Paul’s hipness, while appearing to be true to his character, in itself feels too perfect and is as flawed as his decisions.

Director and co-writer Lisa Cholodenko has crafted a film that places a common plot within context to the changing American mores. Replace Jules and Nic with gay fathers or even a heterosexual couple, the conflicts and challenges are the same. The Kids Are Alright is a necessary film to show how difficult all marriages are and that sexual orientation may not matter in the raising of children. The lesbian themes in this film are not the highlight of the film, but an important detail to pose that the same challenges and conflicts affect all families.