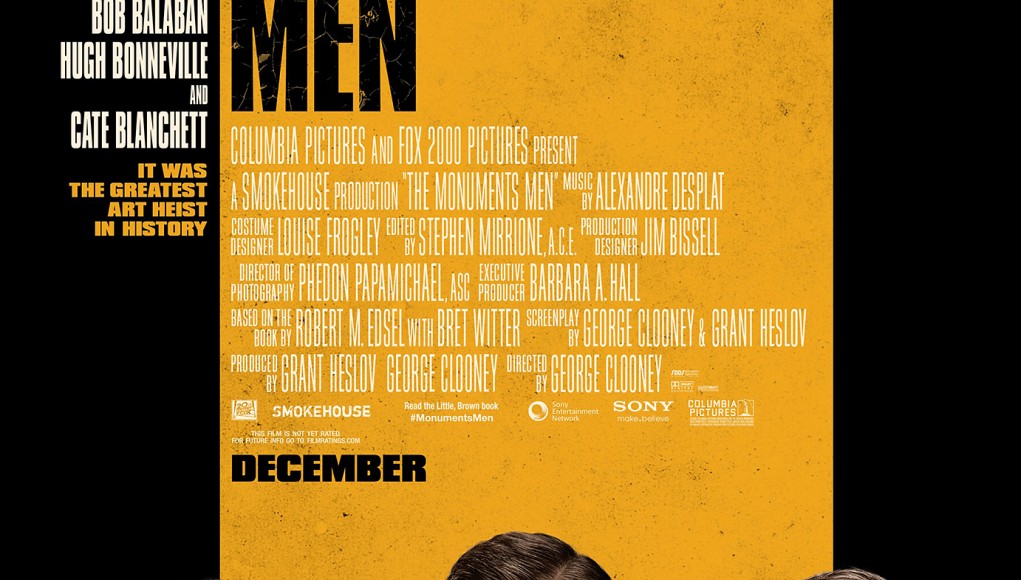 Diehard fans of The Simpsons–during the golden age–may remember an episode where Grandpa Simpson admits that he was a part of set of soldiers who found a handful of art pieces originally stolen by the Nazis, and sealed them in a secret chamber only to be retrieved by the last living member of the group of US soldiers. The Monuments Men tells the most basic parts of the real story, where seven art scholars and experts are charged with finding and rescuing all the art stolen by the Nazis during WWII. It’s a classic stranger-than-fiction narrative featuring many of America’s great living actors. The film tends to fall into saccharine territory, yet its most basic theme provokes questions regarding art’s worth to the annals of history.

Frank Stokes (George Clooney) has convinced President Roosevelt that the Nazis are stealing art of all forms with hopes to display them in Hitler’s proposed museum. With the President’s blessing and a couple words of warning, Stokes assembles a team of art scholars from a variety of fields to locate and return all the stolen art. They are joined by Claire Simone (Cate Blanchett), an art curator from a French museum, who was briefly ordered to assist the Germans with retrieving the art, although with plenty of resistance. Some of the world’s most well-known works are at the heart of the search, including the Madonna statue and the Ghent Alterpiece.

While the premise might seem as if it is a mission from Where in the World is Carmen San Diego, the beginning of the film feels like so many action-packed war thriller clichés: A leader is chosen to assemble previous colleagues to join what is essentially a suicide mission. All of this happens very quickly in the film, but it is enough to have the film start off on the wrong foot. Also, it does not take long to realize that The Monuments Men feels like a piece of something is missing, and that piece is the art. For a film about saving Europe’s most important art, the film itself is bland and trying. Director and star George Clooney has targeted the most common denominator by utilizing the Spielberg Industrial Complex and inadvertently nudging the film into shallow and kitsch areas. It revives Clooney’s directorial efforts that are closely related to political conspiracies and dissent, except this is his least biting film, even more so than the screwball Leatherheads.

The primary theme of the film is to question whether rescuing art is worth the human toll. The answer comes down to how much an individual places on art and history. Art in all its forms helps later generations understand the mindset of the artists in their own generations as depicted so wonderfully in Cloud Atlas. While The Monuments Men celebrates the brave men and women who located and saved these works of art, the film only touches slightly on how all wars tend to destroy irreplaceable works of art, especially architecture. What’s more, we forget how current wars and political revolts, especially in Egypt and Iraq, are destroying ancient artifacts and structures today.

Briefly setting aside the complains about the film, The Monuments Men features many of the greatest living American actors today, including Clooney, Matt Damon, John Goodman, Bill Murray, Bob Balaban, as well as Hugh Bonneville and Jean Dujardin. This ensemble cast is a billing of a lifetime, but even their characters and their dialogue is lacking; a missed opportunity to have these magnificent performers flex their talents.

The film suffers from how broad this true story really is, and the minute details are clearly sacrificed for a more Hollywoodian telling. The film does not spend enough time explore the biggest question: Is it worth sending a soldier to die for art? At what lengths shall we go to preserve our species’ most important artifacts? Art tells us so much about human history, often times provoking emotions of all kinds. The Monuments Men fails to provoke any emotional appeal beyond its ho-hum Hollywood take on such an important mission in World History.