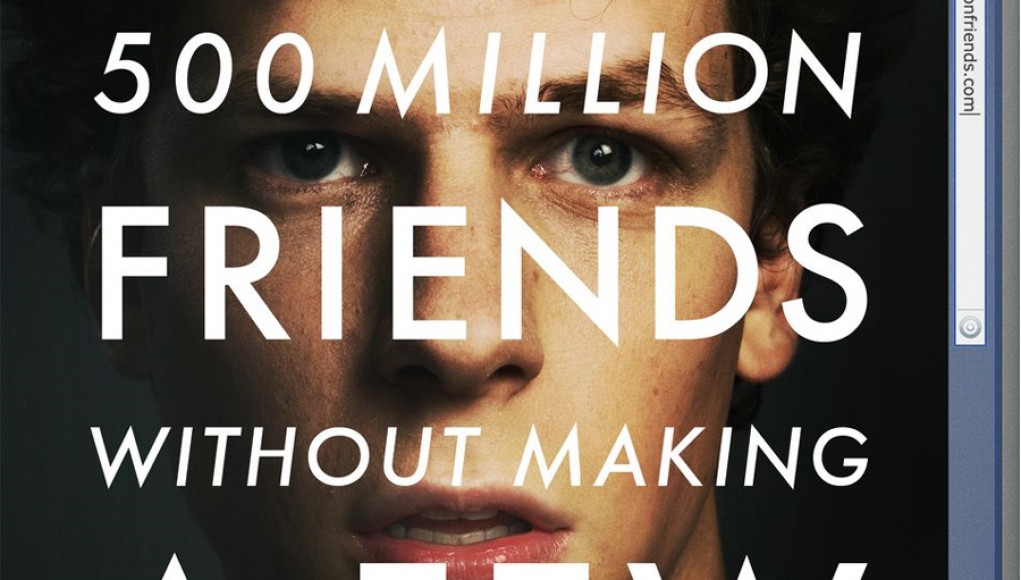 Another highly anticipated film, The Social Network is a bold portrayal of how and why Facebook became of the largest, most successful social media website that has become as daily appliance in our lives, just as much as driving a car. Adapted by dialogue guru Aaron Sorkin off the 2009 nonfiction novel The Accidental Billionaires, and directed by psychological dark thriller auteur David Fincher, The Social Network captures the changing environment of privacy and intellectual property in the rising generation, while explaining the social ineptness of its founder.

Mark Zuckerberg (Jesse Eisenberg) has a terrible time carrying on a conversation with his girlfriend at the time, who dumps him on the spot for his insensitive thought process. Mark takes it hard and develops a hot or not website the same night by consolidating information from a variety of facebooks from Harvard’s houses, all before 2 AM. The offensive site generates tens of thousands of hits before security cuts the connection.

His actions are given academic probation, but he becomes a legend among the Harvard students. So much where he is approached by the Winklevoss Twins and Wayne Chang to program a website to connect Harvard students called ConnectU. Zuckerberg agrees, yet never writes a single line of code for them, instead creating thefacebook.com by the end of the early February the next year. The site takes off with help from CFO Eduardo Saverin (Andrew Garfield), who offers an initial $1000 investment for server costs, and an additional $18,000 for future expansion.

Saverin wants to monetize the website to recoup costs, Zuckerberg takes advice from Sean Parker (Justin Timberlake) (of Napster fame) that the site needed to generate additional coolness and longevity to attract venture capital. Through the year plus that Zuckerberg builds and expands Facebook, he builds and destroys friendships, constantly distancing himself with insensitivity. Strange for someone who continually attempted to find a place to belong.

There is obviously embellishments in The Social Network that certainly take it out of the factual category; then again, what films are entirely true? Much like any great film—or a great story for that matter—unreliable narrators are often the best narrators.

Judging the film’s merits based solely on the film itself, this movie is incredible. The social ideals that have developed due to the growth of Facebook are uncanny, and this film reveals that societal change through this embellished story-arc which draws similarities to Roshomon.

The factual accuracy of The Social Network does not matter. Before this film, and after this film, Zuckerberg will forever be a legend; whether that is a positive or negative ideal, it is up to the individual viewer. Asking for an accurate account from Zuckerberg, Saverin, the Winklevoss twins, or Sean Parker for that matter will give you entirely different portrayals of the scenario. Which is why the Roshomon-esque narrative structure with unreliable narrators was the way to go.

David Fincher has done better work with better source material. Regardless, the cinematography is, again, classic Fincher. Many particular scenes show the camera moving backwards through objects, such as a banister or even a table. Much like the internet memes and trends, such as tilt-shift photography to create a miniature faking can be seen in a few establishing shots later in the film. While I cannot be sure this is the exact form, the resemblances are there, and make for an excellent way to show the smallness of the Winklevoss Twins and Wayne Chang during a rowing competition.

Zuckerberg is merely trying to fit in, everywhere he goes. From yearning to be a part of the Phoenix Club, looking for admiration from the academic counsel, and if not the most, Erica Albright, the one that got away.

The Social Network is very much classic Fincher and classic Sorkin. It shows that Jesse Eisenberg can use his typecast characteristics to develop beyond his Zombieland persona, and Justin Timberlake as the Napster genius Sean Parker returns to his innate ability to act wonderfully. The film itself is an ensemble of film-makers and talents from around the entertainment industry, bound to attract awards and nominations from a variety of sources.