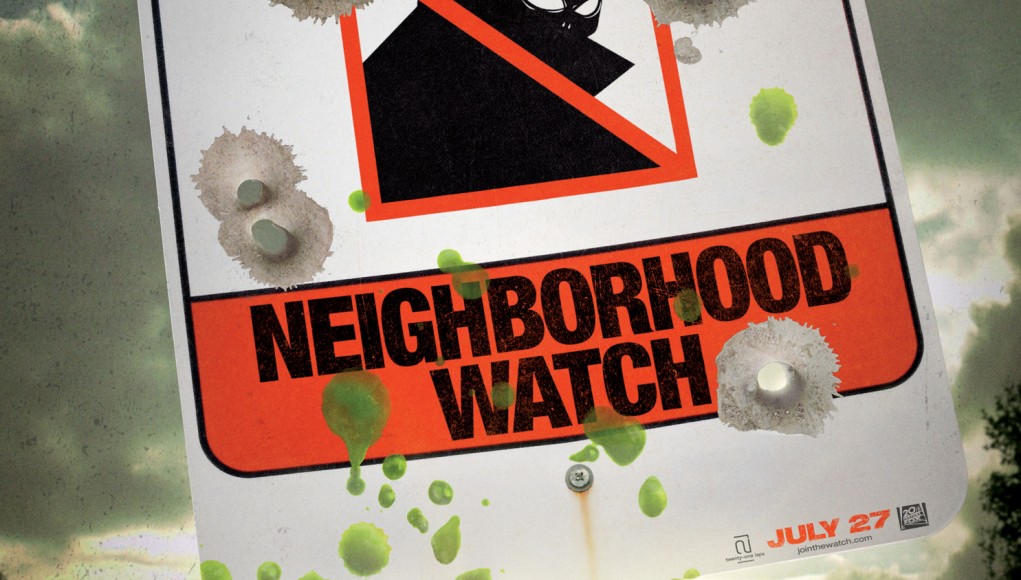 Despite being re-named in response to the atrocious Trayvon Martin/George Zimmerman scandal, The Watch is a comedic vigilante justice tale with an alien invasion narrative that has enough energy to remain entertaining with few good laughs. Without specifically pointing out the themes of world destruction anxieties by alien forces and the cocksure American mythic tradition of taking justice into thy own hands, this film happens to retain its comedic foundation.

Evan (Ben Stiller) is a store manager at Costco and overall community do-gooder. One night he congratulates the night guard Antonio (Joe Nunez) on recently becoming a citizen of the United States. That night, something strange has killed Antonio, and Evan vows to find his killer by polling for interest at the local high school football game to start a neighborhood watch. The initial meeting yields only a small showing: butterfly-knife wielding police-reject Franklin (Jonah Hill), testosterone bromancer Bob (Vince Vaughn), and the cheeky English gentleman, Jamarcus (Richard Ayoade).

The Watch is not apologetic for its mostly vulgar gags and jokes, but the most interesting aspects of this film is the social context. Evan’s motivation to start the neighborhood watch is simply to let the neighborhood understand that there is another eye on their community because, as Sgt. Bressman (Will Forte) explains, the local police force is understaffed.

While the Zimmerman case is still in pre-trial, it conjures up an argument that is as old as America, and rogue justice is certainly not at all new in American cinema. Dirty Harry, Death Wish, and Death Sentence are classic examples, as are most Westerns, with The Losers and Super as recent examples of taking the law into thy own hands. However, The Watch takes a turn and a new theme arises from the anxieties of living amongst crime, aliens.

Antonio’s murder is suspicious almost immediately, and as the trailers revealed, aliens have landed in Glenview. 2012 is the perfect year to inflict our national anxieties regarding the end of the world. The misunderstood Mayan calendar has prompted some to believe this is the year it all ends, and films such as Battleship, Men in Black 3, and Seeking a Friend for the End of the World have all targeted specific demographics to exploit this national anxiety. Now that there have been three wide-released films about alien invasions, there is a clear anxiety that has grown steadily in the past years to manifest itself in Summer 2012.

The Watch’s title changed due to the Trevon Martin killing by an armed neighborhood watch volunteer. Then again, that is exactly what this group in the film has formed, a rogue organization that, by Evan’s intentions, is designed to both find Antonio’s killer and to continue his attempt to ensure Glenview remains the paradise he has always seen in his eyes. However, the other watch members have different agendas; one to hang out and circumvent family-life, one to live-out authoritative fantasies, and the last to experience erotic fantasies. Fantasies abound, The Watch is about four men who become friends over differing ideals; a pitchfork militia in action.

The performances in The Watch are mysteriously above average. Jonah Hill’s character is among his most evolved, although not too far from his 21 Jump Street role; he evokes a Travis Bickle (Taxi Driver) sentiment with a vengeful heart. The improvisation between Hill and Vaughn is particularly interesting, and I suspect that additional viewings may net additional humor from the mumbled dialogue from these two performers that is almost inaudible from theatrical white noise. Stiller’s performance returns to his more straight but darker personas from The Cable Guy, Envy, and even The Royal Tenenbaums.

The supporting cast prompts some of the most genuine laughs. The first true laugh comes from the first shot of Will Fort spouting a creeper mustache to help with his cocky, power-tripping role as a police officer. His partner in crime, the stone-faced Mel Rodriguez, backs Forte’s bubbling officer performance with never saying a word. Even the R. Lee Ermey has a cameo appearance to support the film’s comment of blind individualism.

Seth Rogen and Evan Goldberg are given co-writing credits for their re-writes of this film, and their vulgar signatures are certainly all over the place. Evan Goldberg has been responsible for some of the most mainstream vulgar comedies in recent years, including Goon and The Pineapple Express to name a few. It is safe to say the phallic humor in The Watch is their work.

The humor in The Watch is subjective, but thin at best. There may be difficulty in suspending belief long enough to enjoy this film’s outlandishly evolving plot. Utilizing a Ghostbusters camaraderie with a Sci-Fi essence, and some slight-of-the-hand foreshadowing there is something appealing beyond the crude humor in this film. It is exemplified by Bob, at Evan’s home, easily amused and fascinated by the Matryoshka dolls. Despite the amateurism of the neighborhood watch, they, like Evan’s many other groups and hobbies, is just another doll within a doll, or as a community within a community. 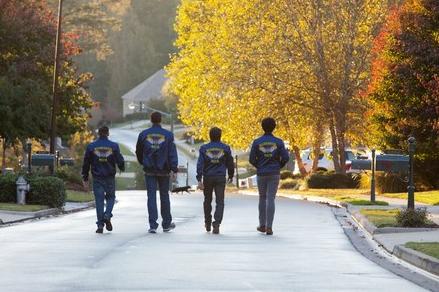