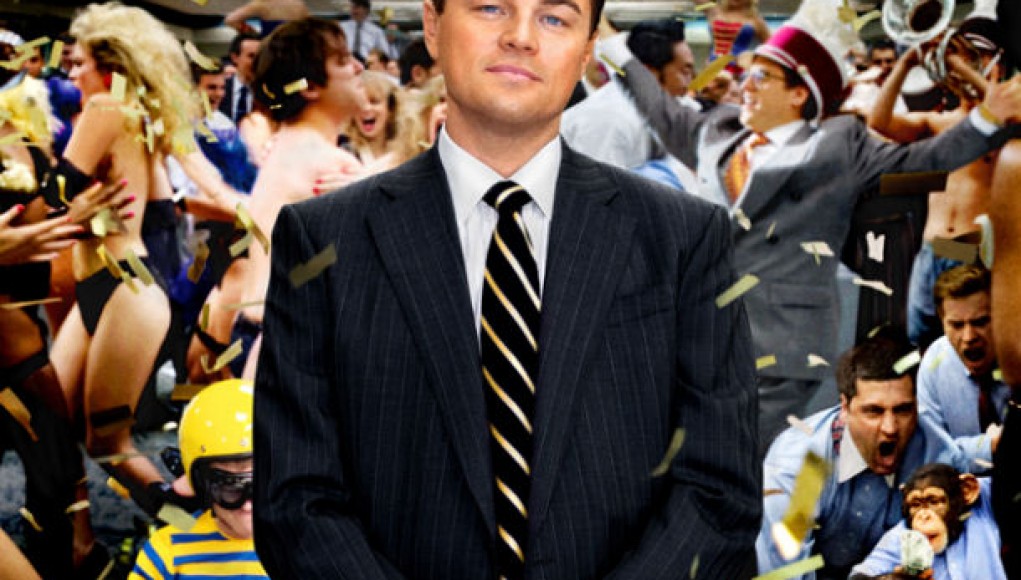 While hilarity and flashes of filmmaking genius punctuate cinema guru Martin Scorsese’s uber-decadent The Wolf of Wall Street, this cautionary tale about avarice in America is a messy magnum opus that too often revels in the very way of life it is warning against.

Jordan Belfort (Leonardo DiCaprio) is a young, aspiring stockbroker with a loving wife, a small but growing bank account, and big ambitions. He soon discovers that he can make more money peddling pink-sheet penny stocks to the wealthy than he can clamoring for a miniscule slice of the larger financial pie at any of the major Wall Street firms. Thus, he enlists a few of his old pals to start his own wildly successful brokerage company, Stratton Oakmont, which quickly devolves into a conglomerate of decadence and corruption.

Appropriately arriving on Christmas day, that very culmination of American consumerism, The Wolf of Wall Street spares no expense in revealing its themes of sex, drugs, money, and more sex, drugs, and money. Within the first five minutes, a dwarf has been hurled Evil Kneivel-style into a giant, dollar-sign bullseye, and Leonardo DiCaprio has blown cocaine through a straw and into a prostitute’s bare posterior just before administering it a wicked smack. Far from the most wholesome Yuletide moviegoing experience, viewers of The Wolf of Wall Street should be prepared for a near-endless stream of nudity, Quaaludes (including an already infamous romp featuring DiCaprio and Jonah Hill both wasted on the drug), infidelity, and shock value for the sake of humor.

While this onslaught on the eyes may sound intriguing coming from the cultured and charismatic lens of Scorsese, The Wolf of Wall Street fails to convey a unified message or ground itself in any definitive set of values. This is largely because it never slows down enough to give viewers a real sense of who Belfort and his cohorts were before they got rich, nor does it adequately convey the gravity or consequence of their actions. In fact, the only consistent central conflict throughout the film proves to be whether or not Belfort can stay out of jail; but even the threat of incarceration comes off as lighthearted and lacking in severity, and never moreso than when he finally does land in the slammer. With the exception of one scene late in the film in which Belfort tries to steal his own daughter away after his wife demands a divorce, none of The Wolf of Wall Street’s numerous indiscretions and debaucherous moments feels truly depraved.

On the plus side, the performances in the film more than deserve the praise bestowed upon them by the press. DiCaprio and Jonah Hill, as Belfort’s eccentric sidekick Donnie Azoff, are equally brilliant. Especially impressive is the fact that both actors manage never to break character (or their accents) despite the film’s many physically demanding scenes. Not to be outdone are Rob Reiner and Matthew McConaughey in two small but hilarious turns as Belfort’s father and first boss, respectively.

But The Wolf of Wall Street is a misstep not only for Scorsese, who falls back on too many bland close-up shots and a wealth of unnecessary narration to tell his story, but also for his usually impeccable, longtime editor Thelma Schoonmaker, who recently revealed that the film was originally four hours long. Unsurprisingly, those cuts can be felt, as large blocks of dialogue appear to be missing from crucial scenes, and a handful of clunky edits – clearly in place to satisfy the 3-hour running time – leave the film’s presentation too brisk and episodic, which only serves to further muddy its already murky themes.

Goodfellas and Casino – two films from which several sequences in Wolf of Wall Street are almost directly culled – also dealt with the excesses of the filthy rich; however, those films conveyed a mounting sense of paranoia and tragedy that left viewers feeling like disaster lurked under every line of coke, and things could all come crashing down at any moment. Scorsese’s latest criminal epic gets so mired in its comedic extravagance (an unfamiliar tone for the director) that it coasts right through Belfort’s fall from power without hitting rock bottom or even convincing its audience that rock bottom would be such a bad thing. More focus on Belfort’s first marriage, the FBI investigation into his company, or the devastation of his parents when he’s sentenced to jail, could have salvaged some valuable moral perspective on his downfall by portraying Belfort’s destructive lifestyle and business practices from a vantage point other than his own. Suddenly that extra hour of footage from the original 4-hour cut seems that much more intriguing.

In a scene near the end of the film that feels far less tragic than it should, the FBI agent who brought down Belfort surveys a subway car full of blue collar Americans on his way home. He appears to be reminded of Belfort’s condemnation of the insignificant and mundane lives of the working class. But rather than sympathize with them and ultimately reject Belfort’s lifestyle, does the agent regret his personal choice to work for an honest wage, wishing he’d instead followed in Belfort’s footsteps, accepted his bribe, and lived the same kind of lawless, lavish lifestyle? After three inebriating hours of sex, drugs, and money, and with no real hangover to show for it…who could blame him?